Six large-scale solar farms, four with big batteries included, have been named as the winners in Victoria’s second renewable energy auction, fast-tracking 623MW of new generation capacity and 365MW/600MWh of new energy storage for the state.

State minister for energy Lily D’Ambrosio said on Friday the successful projects from VRET2 will generate a total of nearly 1,460 gigawatt-hours of renewables year, once completed, the equivalent of powering 300,000 homes.

The solar and storage projects will help deliver Victorian Labor’s target of 100% renewable electricity across government operations by 2025, as well as the statewide target of 50% renewables by 2030, and the brand new energy storage targets.

And the winners are…

The successful bidders in the auction are spread across four of Victoria’s designated Renewable Energy Zones, from the Murray River REZ in the state’s north-west to the Gippsland REZ in the south-east.

In the Murray River REZ, the projects include the 95MW Derby solar farm with 85/100MWh battery by Sungrow Renewable Energy, and stage two of the Kiamal solar farm (150MW) being developed by Total Eren with a 150MW/300MWh battery. 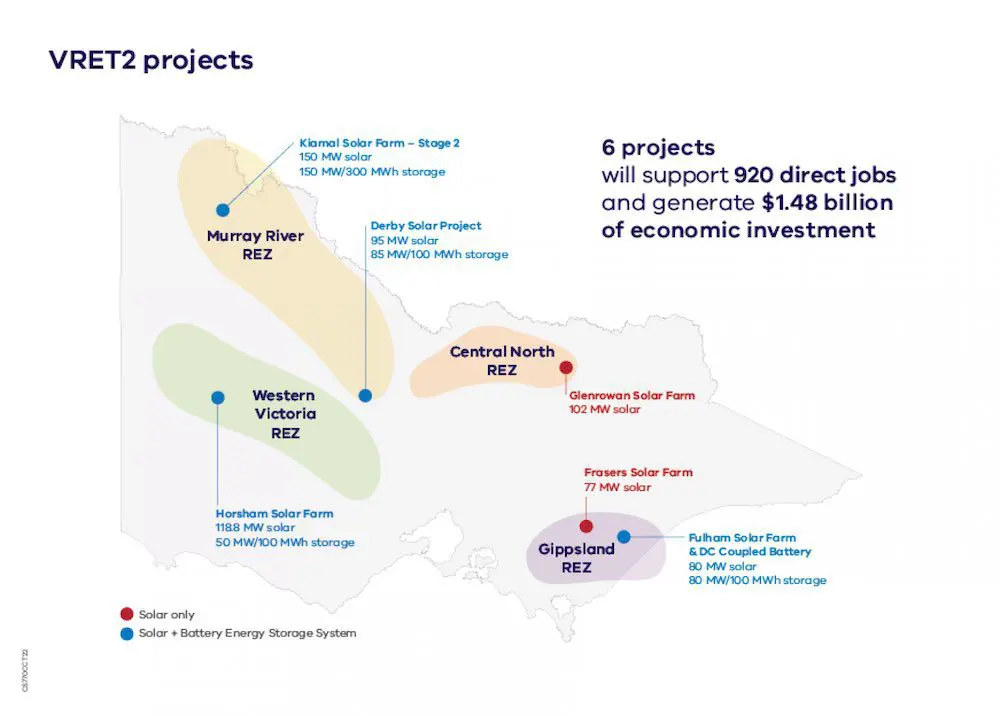 In the Gippsland REZ gets Octopus Investments’ Fulham solar farm and battery (80MW and 80MW/100MWh), west of Fulham, and Frasers Solar Farm (77MW) by South Energy, north of Traralgon.

The significant battery storage component of the VRET2 auction result comes little more than a week after the Andrews government announced nation-leading plans to legislate a 2.6GW energy storage target by 2030, and 6.3GW by 2035.

Due to the local content requirements of the VRET, around 200 Australian and New Zealand companies will be building and maintaining the projects, which will also support 920 direct jobs, create around 290 positions for apprentices, trainees and cadets and deliver $1.48 billion in investment.

The projects are also required to make sure more of the program’s benefits stay in local communities by using local products and suppliers.

“We’re powering every government building with cheap, clean renewable energy – boosting investment in the state by over a billion dollars and creating hundreds of jobs as we combat climate change,” said D’Ambrosio.

“Victoria is the nation’s clean energy powerhouse – cutting emissions by more than any other state, tripling the amount of renewable energy and creating thousands of jobs.”