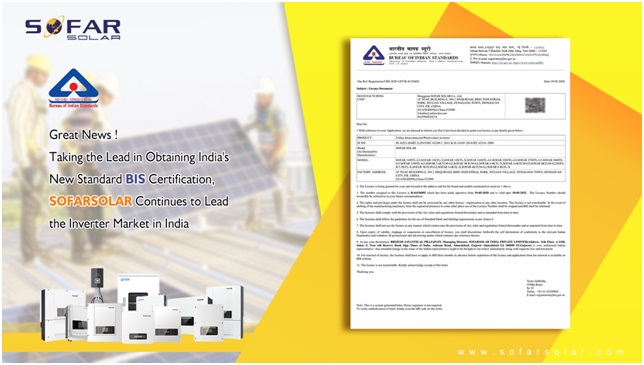 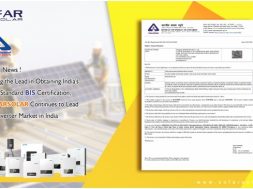 Recently, SOFARSOLAR announced that it has taken the lead in obtaining the BIS certification of India’s new inverter standard. The first achievement of this certification has laid the leading position of SOFARSOLAR in Indian inverter market, and at the same time set an excellent quality benchmark for the complicated inverter market environment in India, which is good news for users in Indian states. The selection of various power section inverters of SOFARSOLAR not only ensures the quality and revenue, but also enables users to enjoy the intimate and timely local service support, which can be said to be one stroke more.

As early as 2015, SOFARSOLAR started to layout the Indian market. Now it has set up branches, warehousing centers, sales centers and service centers in India to provide more convenient local services for local customers. Based on the local power grid structure, photovoltaic standards, policies and market environment, SOFARSOLAR has formulated a series of market and product R & D strategies, seized the opportunity to enter the market, and emerged with a sudden rise. It has successively provided inverters to local government power stations, farm power stations, industrial and commercial power stations, and home power stations, of which over 100MW inverters were provided in Gujarat alone in 2019,  and has achieved major market breakthroughs in multiple market segments in India,  occupying a leading position in inverter market in many regions. Meanwhile, since 2015, it has been honored as “the Best Inverter Enterprise in India” and “Top Roof Inverter Brand” by many well-known institutions in India. Now, SOFARSOLAR has become a household inverter brand in India.

This time, SOFARSOLAR took the lead in obtaining BIS certification and the admission ticket for India’s new standard of implementation, laying a solid foundation for SOFARSOLAR to broaden and deepen the market. At the same time, it also provides strong market support and quality assurance for local partners and further deepens the cooperation space and strength.

Mr. Brijesh Prajapati, head of SOFARSOLAR India: “This time we took the lead in obtaining BIS certification. Thank you very much for the recognition of our technology and products from the certification authority. In the future, we will adhere to our original intention to bring more efficient, stable and reliable inverters to the market, so that every household in India can enjoy the green and healthy life brought by clean energy. “