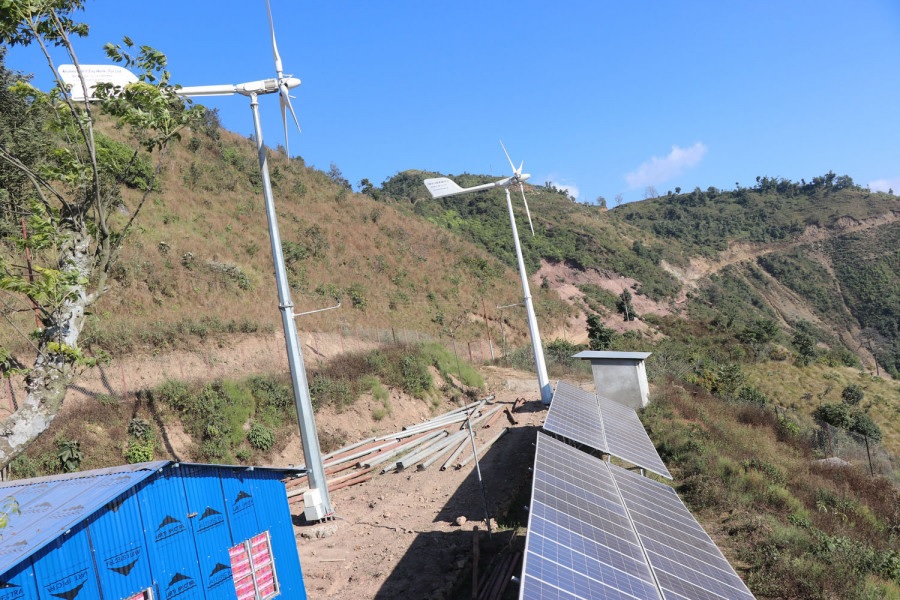 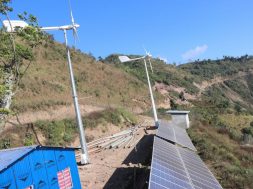 Currently electricity is distributed between 4am to 10pm to 143 households every day.

A new solar and wind energy project has illuminated a total of 143 households, seven government offices and several schools in four villages in Nisdi Rural Municipality in Palpa.

The four villages—Kaafal, Rukse Bhanjyang, Maulathar and Jhyaltung—never had access to the central transmission line, compelling locals to depend on lanterns and candles for light till date. But with this new energy project, which produces 25 kilowatts of electricity—15kw from
and 10kw from —residents of the villages now have access to electricity.

The project, Mityal Solar and Wind Energy, was slated to be completed a year and a half ago, but its deadline was pushed back owing to the construction company’s negligence, locals say. The project’s original deadline was mid-July.

But Bhupindra Sunari, chairperson of the alternative energy consumers’ committee, said that despite the missing of the deadline, locals are happy about the project’s completion. “Many people had ridiculed the project, doubting if it’d ever culminate,” said Sunari. “But it’s a relief that the project is finally complete.”

A representative from the construction company said that the project was pushed back because they had to import machines from overseas.

The project was constructed jointly by the Alternative Energy Promotion Centre and Nisdi Rural Municipality, with a total budget of Rs21.5 million, according to Sunari. The locals too contributed land worth about Rs600000 for the project, while also providing widespread labour help.

According to Yogendra Baral, of the Krishna Grill and Engineering Works that undertook the project, currently the electricity is distributed between 4am to 10pm every day.

Once a minor complication with transformer is remedied, electricity will be supplied 24 hours, said Jabarsingh Saru, deputy chair of the electricity distribution committee. “The locals are delighted,” he said. “So are the workers at various offices.”

However, the price the locals have to pay for the power may change. Currently, the locals are paying Rs150 for consuming up to five units, with an additional Rs50 for repair and maintenance. But once consumption crosses five units, the fare will be Rs15 for each additional unit.

“Now we don’t have to wait for access to the central transmission line,” said Dhan Bahadur Thada, a teacher of Gaurishankar Secondary School. “We are all happy.”

0
0   0
previous Myanmar has only achieved 50% electrification, according to State Counsellor
next A solution for solar power development