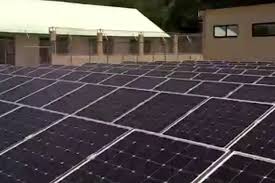 MANILA – Solar Philippines is targeting the second half of 2021 for its local stock market debut, banking on “cost-effective” solar-battery projects, a top company official said on Tuesday.

“Ideal time is second half of next year…We’re optimistic [by] next year. If not, very soon after,” Solar Philippines Founder Leandro Leviste said on the timing of the company’s initial public offering.

The money raised from the planned maiden public offering, Leviste said will be used to develop solar power projects that are “in aggregate larger than any power portfolio in the Philippines today because of the cost competitiveness of solar energy — now the cheapest source of energy in the Philippines.”

“In the past 5 years, we were convincing the largest power companies that solar is cheap, and they’re focused on their coal and gas developments. Just this year, they started to realize that [solar] is now cheap,” Leviste said.

Incumbent power companies can drive solar adoption in the country when they “embrace new technologies and build it at ever greater scale,” he added.

Despite industry concerns of battery technology being one of the most expensive in the world, Leviste claimed solar plus battery storage are “already cheaper” compared to other forms power technologies supplying for baseload and mid-merit requirements.

Baseload power supplies for the basic electricity consumption in homes, while mid-merit power provides for additional power usage such as air conditioners, microwaves and others.

“We strongly believe that [solar plus battery] will make all the other new power technologies not cost competitive…Next year it is unquestionable that solar plus battery is the cheapest new source of energy,” Levite said.

The Solar Philippines founder noted a significant decrease in the cost of solar panels to $150,000 per megawatt (MW) today from $600,000 per MW when the company started in 2013.

Likewise, he said the price of lithium ion batteries for energy storage has gone down to $200,000 per MW hour compared to $1 million per MW hour 7 years ago.

The company is known for its large-scale solar power projects, including its 63 MW Calatagan solar farm and 150 MW solar plant in Tarlac.