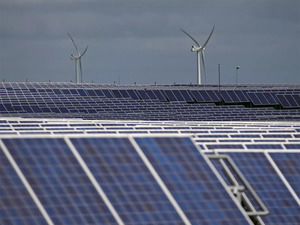 Solar energy generation projects totalling 107.46 GW are either installed or under various stages of implementation or tendering, Parliament was informed on Tuesday. India had set a target of having 100 GW of solar energy by 2022.

“… a total of 107.46 GW solar energy capacity has either been installed or under various stages of implementation or tendering,” Power and New & Renewable Energy R K Singh said in a written reply to the Rajya Sabha.

He also told the House that 7,555.16 MW of renewable energy capacity has been added during the current fiscal till October 31, 2021.

In a separate reply to the House, the minister stated, “Renewable energy projects (including large hydro) of capacity 63.64 GW are under various stages of implementation in the country.”

The government has set a target of achieving 175 GW of renewable energy capacity (excluding large hydro) by December 2022.

A total of 150 GW of renewable energy capacity (including large hydro) has been cumulatively installed in the country till date, the minister stated.

In another reply, the minister told the House that India has recorded 192,059.71 million units (MU) of electricity from renewable energy sources till September during the current fiscal.

As per Central Electricity Authority’s National Electricity Plan, contribution of renewable energy sources is estimated to be around 20 per cent of the total electricity demand of the country in the year 2021-22 and 24 per cent by 2026-27, Singh added.