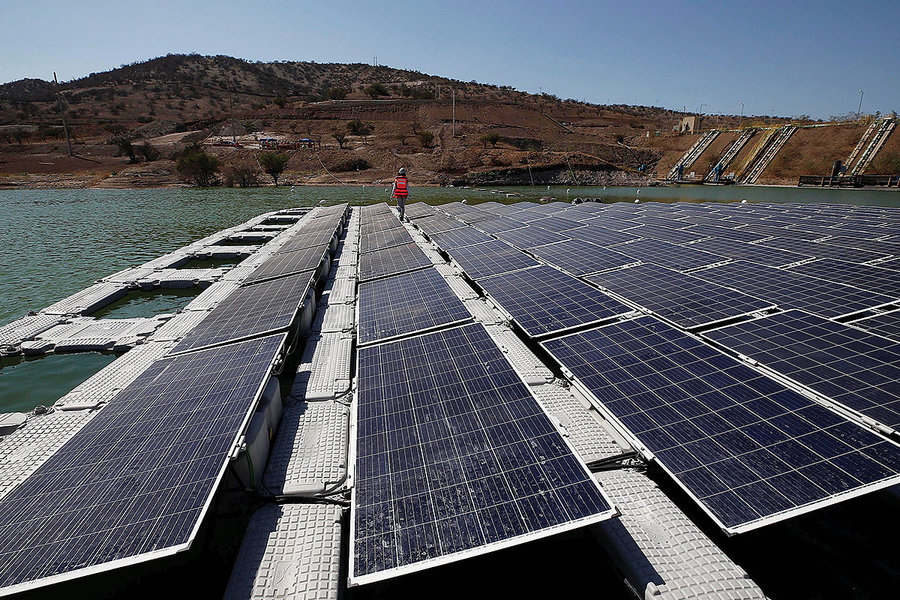 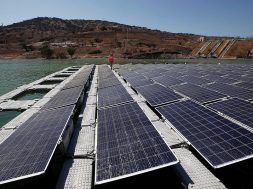 In 2017 the world’s emerging-market nations marked an important transition: They added more clean energy than fossil fuels to their electric generating capacity. Chile, India, and Jordan topped the list in that trend, tracked in a new report by Bloomberg New Energy Finance (BNEF).

It’s not just that the cost of renewable energy is falling. It’s also government policies “that let the trends materialize in the market,” says BNEF senior associate Dario Traum. Chile and Jordan dived into renewables partly as a way to enhance their energy security after crises that affected their fossil fuel imports.

India is striving to give more people access to electric power and has fused environmental goals on top of that. Setting a clean power target has signaled to private investors that the state would underwrite some of the inherent risk of development, says climate policy expert Kanika Chawla in Delhi. “Using public money to de-risk private investment is a really good way” to boost investment, she says. “This would work in emerging economies around the world.”

Solar panels, wind turbines, geothermal vents – all three are technologies that were once solely the province of wealthy nations. Now they have been swiftly adopted in developing countries as costs have plummeted. In fact, global emerging economies added more clean power capacity than fossil fuel generation for the first time in 2017, according to a new annual survey conducted by Bloomberg New Energy Finance (BNEF).

Chile, India, and Jordan topped the list in that survey, with all three countries experiencing significant renewable energy booms. Each country has unique challenges that complicate their transition to clean energy, and fossil fuels still account for the bulk of their energy consumption. But Dario Traum, a BNEF senior associate and project manager at the Climatescope clean energy index, finds their respective strides encouraging.

“Governments [are] recognizing [and] leveraging the evolving technology landscape by putting in place the right mechanisms that let the trends materialize in the market,” says Mr. Traum.

As the expansion of clean energy technologies becomes more feasible, it is also becoming more urgent. A report released by the United Nations last year stated that countries need to significantly change their energy creation and consumption habits in order to stave off the worst outcomes of climate change, including rising sea levels and more extreme weather patterns. Studies also show that climate change will more severely impact developing countries because of their locations and lack of adaptability.

But market analysts like Mr. Traum are quick to point out that clean energy is more than an environmental good. By investing in renewables, a country invests in its future, he says. Renewables can also create jobs or establish energy sovereignty. These economic and political benefits are partly why they are increasingly cost-effective and available.

“More and more countries are realizing that there’s not much value in getting in on a technology that not only has considerable environmental impact but [is] also increasingly being challenged on economics,” says Mr. Traum of fossil fuels.

Chile, Jordan, and India are winning global acclaim for their efforts in sustainability. But until recently, all three were highly dependent on fossil fuels.

Chile’s pivot to renewable energy sour­ces was unusually rapid. The country spent much of the 20th century drawing power from its massive dams and natural gas from Argentina, but a severe drought and a gas shortage plunged Chile into an energy crisis in 2004.

“[The Chilean government] started looking for ways of being more self-sufficient in terms of energy, because we couldn’t just rely on oil that we didn’t have, or on rain that we didn’t know when it [would fall],” says Aldo Madariaga, a researcher at the Center for Social Conflict and Cohesion Studies in Santiago, Chile.

By leveraging its sun-drenched deserts and coastal winds, Chile increased the percentage of its energy created by renewable sources from 5 percent to 18 percent in five years. Its government is aiming for 70 percent by 2050 – a target many energy experts expect Chile to reach far sooner than that.

Much of the boom was overseen by the country’s former president, Michelle Bachelet, who won the Champions of the Earth award from the United Nations in 2017 for her environmental preservation efforts and her long-term energy plan.

“She’s not responsible for the moment or for building the conditions, but she was able to channel this in the right way and during her government it became a priority,” says Mr. Madariaga.

While Chile was nudged by external forces, India’s impetus has been largely from within.

The country’s booming population presents several challenges, including energy access. When Narendra Modi became prime minister in 2014, he started a project to electrify villages that wrapped up last year. And in response to the 2015 Paris climate agreement, Mr. Modi also significantly raised the country’s renewable energy targets from 20 gigawatts to 175 gigawatts of installed capacity by 2022.

Kanika Chawla, a climate policy researcher at a think tank in New Delhi, helped author a report showing that the prime minister would create 1.1 million jobs by raising that goal.

“I think that the administration saw an opportunity to both signal climate leadership, but also use it as an opportunity to sort of accelerate the program at home that does respond to domestic priorities as well,” she says.

Setting that target helped renewables proliferate by signaling to private investors that the state would underwrite some of the inherent risk of development.

“Using public money to de-risk private investment is a really good way to – without distorting the market – bring in much more appetite from different types of investors and companies into the sector,” says Ms. Chawla. “This would work in emerging economies around the world.”

India still relies upon fossil fuels for the majority of its energy production, and is not projected to meet its 175 gigawatts target by 2022, but Ms. Chawla is optimistic. She says the renewable energy market is “robust” and does not need state policies or subsidies to ensure its continued growth.

Jordan started from a similar place as Chile in terms of its energy sources. Historically, Jordan imported around 97 percent of its energy, but repeated bombings of portions of the Arab Gas Pipeline during the 2011 Egyptian protests forced a change.

“The gas pipeline explosion served as a wakeup call to Jordan that it needs to change its energy topography,” says Ayah Alfawaris, an energy professional based in Leeds, Britain. She has worked extensively in Jordan.

Since then the country has found new domestic pockets of gas to meet its need, but it also started subsidizing private developers who wanted to build wind farms in rural towns and place solar panels on mosques. The current goal is to have 20 percent of the country’s energy sourced from renewables by 2020.

Ms. Alfawaris thinks Jordan will fall short of that goal but is still optimistic about the long-term view.

“Jordan was not afraid of making mistakes and fixing them,” she says in an email to the Monitor. “Many amendments and improvements to the renewable energy law, regulations and directives have taken place to ensure the success of the sector.”

Get the Monitor Stories you care about delivered to your inbox. For BNEF associate Mr. Traum, seeing countries like Jordan take the first step to sustainability is thrilling.

“[In 2017], for the first time, installation of renewables topped fossil fuels in the emerging world. It’s major for all things climate change because … seeing installations of fossil fuels decline is a good sign about the last carbon that we’re going to have to be dealing with down the line.”