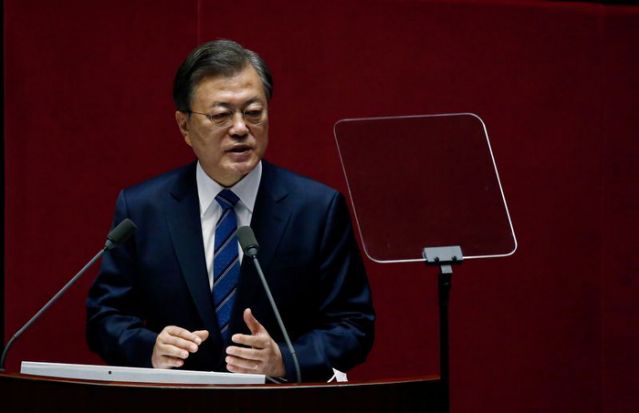 SEOUL: President Moon Jae-in of South Korea, one of the world’s most fossil-fuel reliant economies, said on Wednesday the country will go carbon neutral by 2050.

The announcement comes after Japan earlier this week said will cut greenhouse gases to zero by 2050 and become a carbon-neutral society, a major shift in position on climate change.

“Together with the international community, we will actively respond to climate change and target carbon neutrality by 2050,” South Korean President Moon Jae-in said in a speech in parliament.

He pledged to spend 8 trillion won on an earlier announced “Green New Deal” aimed at creating jobs and helping the economy recover from the coronavirus fallout by replacing coal dependence with renewables.

“This is a very positive step in the right direction after Korea’s exemplary Green New Deal which was announced in July,” U.N. spokesman Stephane Dujarric said in a statement.

“We expect that this important pledge leads the Korean industry to swiftly shift from fossil fuels to a 100% renewable based system,” Jude Lee, Program Director of Greenpeace East Asia said in a statement.

First proposed by Moon’s ruling party ahead of the parliamentary election in April, the plan set ambitious goals of net-zero emissions by 2050, an end to funding of overseas coal plants, and introduction of a carbon tax.

Coal makes up 40% of South Korea’s electricity mix and renewable power less than 6%, making carbon dioxide emissions per capita are among the highest in the region.