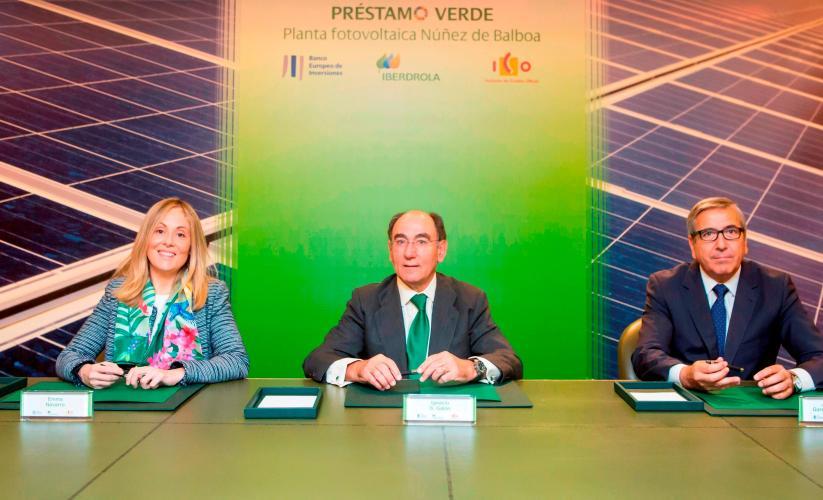 Spain: EIB and ICO sign a green financing deal with IBERDROLA for the largest photovoltaic power plant under construction in Europe, in Extremadura 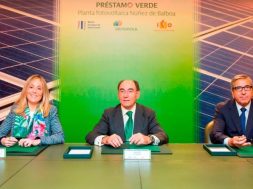 Spain: EIB and ICO sign a green financing deal with IBERDROLA for the largest photovoltaic power plant under construction in Europe, in Extremadura

The European Investment Bank (EIB) and the Instituto de Crédito Oficial (ICO) will finance development of the Núñez de Balboa photovoltaic power plant, which Iberdrola is currently building in Extremadura. The facility covers a surface area of close to 1000 hectares and will provide a total output power of 500 MW, making it the largest photovoltaic power plant under construction in Europe. It will be able to supply clean energy to 250,000 people, more than the population of the cities of Cáceres and Badajoz, and it will avoid the emission of 215,000 tonnes of CO2 into the environment every year.

This green financing agreement was signed in Madrid by EIB Vice-President Emma Navarro, ICO President José Carlos García de Quevedo and Iberdrola President Ignacio Galán. The EU bank will provide EUR 145m and ICO will provide up to EUR 140m for the company’s new renewable energy project, the total investment for which will reach EUR 290m.

Núñez de Balboa is located between the municipalities of Usagre, Hinojosa del Valle and Bienvenida in Badajoz province. It is scheduled to come on line in 2020, and the construction phase will create more than 1000 jobs. The project also includes development of all of the infrastructure required to transmit the energy generated to the electricity distribution network.

At the signing ceremony, EIB Vice-President Emma Navarro said: “We are very happy to be supporting a project that will strengthen Spanish and European leadership in the transition towards a low-emissions economy. Our involvement demonstrates the EIB’s strong commitment to climate action. The EU bank is the biggest multilateral financer of projects that contribute to climate action, supporting projects like this one that reduce contaminant emissions while generating economic growth and employment.”

ICO President José Carlos García de Quevedo added that “the deal signed today secures support for financing investments that promote energy efficiency or the generation of energy from renewable, non-contaminating sources. This financing fits into the ICO Group’s global strategy to include sustainability criteria in its business model”.

Ignacio Galán, President of Iberdrola, explained during the signing ceremony that “this new agreement guarantees our investment in Núñez de Balboa, and we are continuing to work towards our target of tripling our wind and solar capacity in Spain by 2030”. Furthermore, the financing deal signed with the EIB and ICO is in line “with Iberdrola’s commitment to a sustainable energy model that enables the transition to a low-carbon economy,” added Galán.

The EIB, as the world’s largest multilateral provider of climate finance, aims to dedicate at least 25% of its investments to climate change mitigation and adaptation, supporting low-carbon growth with climate resilience.