Solar panels on homes in Northcote, one of Melbourne’s inner suburbs 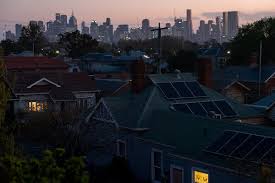 Asia - Pacific
CAIRNS, Australia : Australia is the world’s second-largest exporter of coal, which plays an outsize role in its economy and politics. But the country has also quietly become a renewable energy powerhouse. About one in four Australian homes have rooftop solar panels, a larger share than in any other major economy, and the rate of […]
Read more