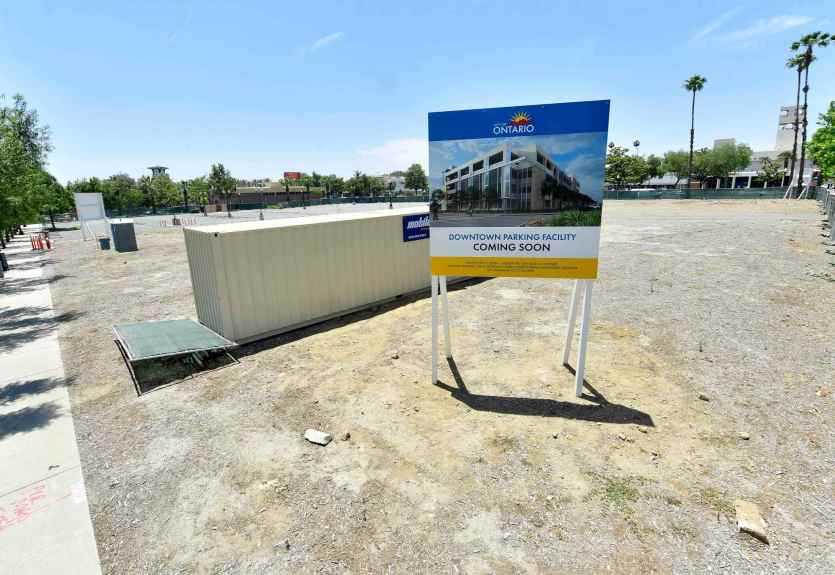 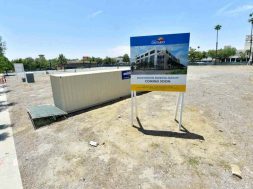 Construction is soon to start on a parking structure near the corner of Lemon Avenue and C Street in downtown Ontario as seen on Friday, May 28, 2021. The $10 million structure will have 17 electric-vehicle charging stations made by Tesla when it is completed in spring 2022.

When considering revitalizing an aging downtown, a new parking garage might not be the first thing that comes to mind.

But that’s what the city of Ontario is building at the corner of Lemon Avenue and C Street at a cost of $10 million. The parking structure will go hand-in-hand with a 158-unit apartment-plus-retail building planned for C Street and Euclid Avenue, providing new, downtown residents a place to park and comfortability with walking through downtown stores and eateries, explained Jennifer McLain Hiramoto, economic development director.

Last week, the City Council took advantage of a $160,000 grant from the South Coast Air Quality Management District to add amenities to the parking structure. Namely, the anti-smog district grant will help fund the installation of 17 electric vehicle charging stations in the new structure.

Tesla, the leading electric-car maker, which realizes that more charging stations will help it sell more vehicles, has inked a contract with the city for the installation, operation and maintenance of the chargers, which should be operational at the same time the structure is completed by March 2022, said Ontario city officials.

The new car chargers — possibly the largest number in a single location in the city — will be installed as follows: eight Tesla-only Superchargers and nine universal 240-volt Level 2 charging stations available for all other model electric vehicles.

A Tesla owner could charge the electric vehicle in about 45 minutes to an hour at one of the Tesla-only portals, McLain Hiramoto explained. That would give the owner time to eat lunch in a downtown restaurant.

“You would have Tesla owners waiting for their cars to charge and they may go to a nearby Starbucks or patronize another business and bring customers into the downtown,” she said on Thursday, May 27.

The above-ground structure will be built in four levels plus there will be rooftop parking; the structure would accommodate 412 vehicles. Some of the parking spaces will be leased to the owner of the mixed-use residential project, Matt Hickey, economic development coordinator, wrote in an email.

The parking structure broke ground a week ago, McLain Hiramoto said. It is what officials hope will be one in a string of projects popping up in Ontario’s historic downtown in the next year or so.

“This (structure and charging stations) is for the benefit of the community,” McLain Hiramoto said. “It is part of a renaissance we expect to be happening in downtown.”

The staff report says the addition of electric vehicle charging stations is in conjunction with Gov. Gavin Newsom’s executive order that all new car sales in the state be electric vehicles by 2035. 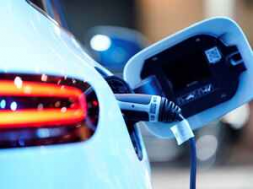 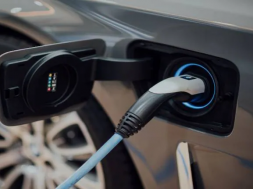 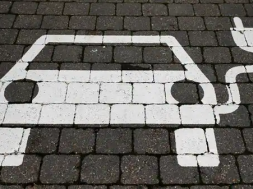