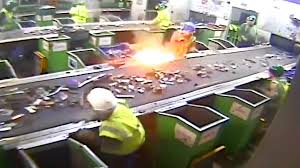 The stress levels rocketed for Ian Scott-Browne earlier this month, when one of his colleagues radioed him and told him to call the fire brigade.

Smoke had been spotted coming from one of the sorting machines at the Smallmead recycling centre, just outside Reading in southern England.

He knew that a fire in one of the machines could be catastrophic as burning plastic, paper and cardboard could be quickly spread by conveyor belts which connect all the machines in the facility.

“My concern was that we’d lost control of where the fire was,” says Mr Scott-Browne, who is an operations manager at the recycling facility.

For him there was a tense 15 minutes while firefighters, helped by some of his staff, urgently took heavy metal panels off the side of the sorting machines to track down and extinguish the fire.

Small fires like that are surprisingly common at recycling centres. Somewhere in the UK there is one every day, on average.

As a result the industry has become good at extinguishing them, but they would rather not deal with them at all, particularly as recycling centres are full of combustible materials.

The problem is that however attentive staff might be to the threat of fire, they can’t control what people put in their recycling bins.

The Environmental Services Association (ESA), which represents waste firms like Biffa, Veolia and Suez, says too many batteries are going into either recycling bins or black rubbish bags, where they are easily damaged by sorting equipment and start to burn – so-called “zombie” batteries.

The ESA has launched a campaign called Take Charge which encourages people to dispose of batteries properly.

“Unfortunately, the majority of batteries thrown away in the UK at the moment are not put in the proper recycling bins. Fires caused by carelessly discarded zombie batteries endanger lives, cause millions of pounds of damage and disrupt waste services,” says Jacob Hayler, executive director of ESA. Read More..