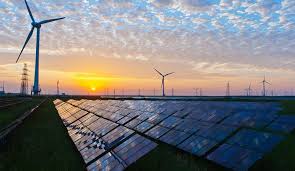 The BNP Paribas Energy Transition fund’s Asia allocation has increased to 18% from 11% in September, co-manager Ulrik Fugmann said in an interview. The fund, which has climbed 131% this year to beat most peers in the environmental, social and governance category, is exploring investments in China, Hong Kong, India and South Korea.

The green ambitions provide a “unique opportunity to both deliver economic growth and turbo-charge progress on meeting our climate goals, and this could potentially translate into significant earnings growth for Asia’s energy transition companies,” Fugmann said.

The fund is underweight U.S. shares as Asia is likely to have better profit and economic growth in 2021. Expectations of a weaker dollar also help, he added. 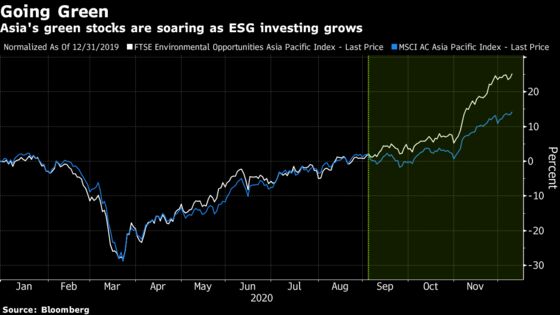 The $1.8 billion environmental solutions-focused fund is adding positions in Chinese companies linked to wind power generation, and has investments in solar companies and battery makers. Shares of Korean electric-vehicle battery producer LG Chem Ltd. and Hong Kong-listed wind turbine producer Xinjiang Goldwind Science & Technology Co. — part of its top holdings as of October — are up 163% and 34%, respectively, this year.

China’s net-zero plan by 2060 is “incredibly appealing” and will benefit hydrogen fuel cell suppliers that have sizable operations and presence in Asia, Fugmann said.

He and co-manager Edward Lees are also evaluating Indian firms that “could be the main beneficiaries in the decarbonization of the power generation system” including solar power generators, equipment manufacturers and those involved in smart grid technologies. India expects 40% of its power-generation capacity to come from non-fossil sources by 2030.

Still, the U.S. continues to be the fund’s biggest country exposure with more than 40% of the portfolio allocated to companies listed there. Solar panel installer Sunnova Energy International Inc. and Ballard Power Systems Inc., a hydrogen fuel cell developer, were its top two holdings in October. Their shares are up 254% and 194%, respectively, in 2020. ©2020 Bloomberg L.P.