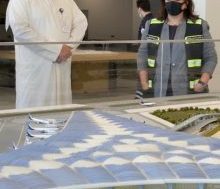 Busoga Kingdom has leased out a 100-acre piece of land in Mayuge to an investor to establish a Shs102 billion solar photovoltaic (PV) electricity plant.The investor, Emerging Power Uganda, has reportedly paid a premium of Shs250 million to the kingdom for the land in Bufulubi village.In an interview with Daily Monitor, Mr Gideon Ronald Lubaale, the Busoga Kingdom permanent secretary, said the company will also pay an annual rent of Shs15 million. The lease will go on for 25 years from the date of commissioning of the project.

The Electricity Regulatory Authority (ERA) is currently reviewing Emerging Power Uganda’s application for a licence to generate power using PV technology. Consequently, the company should be issued with the licence within six months.Emerging Power Uganda managing director Raphael Reveche said once they get the licence, they will need six months to put up the panels.According to Mr Reveche, during construction, about 50 fairly skilled workers will be needed thereby giving some relief to the unemployment pressures in the sub region.

“Then during the operation phase, other jobs in security, cleaning and cutting grass will be available,” he said.According to the ERA chief executive officer, Dr Benon Mutambi, such electricity generation projects impact on development in the areas they are implemented. He cited Karuma Trading Centre, which is picking up because of the construction of Karuma hydro power project.

Once complete, the solar photovoltaic panels will add 15 megawatts to the national grid.Uganda’s current installed electricity generation capacity is 852MW while constrained peak demand is 530MW.Emerging Power intends to sell a unit to the Uganda Electricity Transmission Company Limted at $0.11 (Shs377) per unit.Domestic consumers who get their electricity from Umeme, leader of the nine power distribution companies in Uganda, pay Shs651 for a unit of power.