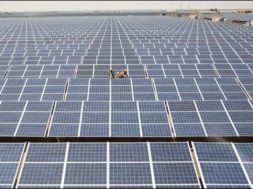 The Uttar Pradesh government on Thursday said it has set a target of installing 670 megawatts (MW) of rooftop solar capacity across five “religious” cities of the state by 2024.

The Uttar Pradesh government on Thursday said it has set a target of installing 670 megawatts (MW) of rooftop solar capacity across five “religious” cities of the state by 2024. The government will also provide a subsidy of Rs 1,332 crore for the installation of rooftop solar projects in Ayodhya, Mathura, Varanasi, Gorakhpur and Prayagraj, Minister for Department of Additional Sources of Energy Shrikant Sharma said in a statement.

“A total of 670 MW of rooftop solar capacities would be installed across five religious cities of UP by 2024. The consumers would benefit with a subsidy of Rs 1,332 crore,” Sharma, who is also the Minister for Power in the state, said.

About 1,000 million units of energy will be generated annually after installation of 670 MW of rooftop capacity.

The decision was taken at a meeting of Uttar Pradesh New & Renewable Energy Development Agency (UPNEDA).

During the meeting, officials were also directed to run a campaign to create awareness and promote the usage of solar energy in these cities and other parts of the state, it added.

UPNEDA is the nodal agency for the implementation of solar energy schemes in the state.

The Centre has set a target of installing 175 GW of renewable energy capacity by 2022, which includes 100 GW from solar energy, 60 GW from wind energy, 10 GW from bio-power, and 5 GW from small hydro-power.

The Uttar Pradesh government has set a target of producing 10,700 MW of renewable energy by 2022.

Sharma said the state will achieve its target of renewable energy within the said timeframe.

He said monthly review meetings will be held to discuss the progress being made in the installation of such projects.