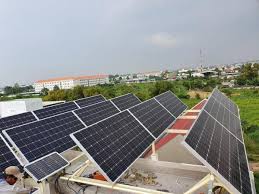 The Internal Security Operations Command (Isoc) on Tuesday admitted that its 45-million-baht solar power project in Chiang Mai’s Omkoi district had not yet reached a remote village that ended up being helped out by a YouTube celebrity.

Isoc was responding to criticism on social media about why it had invested so much money in the solar project but Ban Mae Kerb, located on a mountain some 300 kilometres from Chiang Mai, still lacked a supply of electricity until Pimradaporn Benjawattanapat, alias Pimrypie, came to their aid.

A copy of a document, confirmed as genuine by Isoc spokesman Maj Gen Thanathip Sawangsaeng, was posted online and contained details of the solar project that validated the criticism.

Ms Pimradaporn has come under fire after she donated half a million baht to finance a project to improve the livelihood of children in the mountains of Chiang Mai province, which includes the installation of solar cell panels in Ban Mae Kerb.

Other than installing solar cell panels, the money was used to buy shoes and a television for children in a far-flung corner of Ban Mae Kerb, which is located in tambon Na Kian of Omkoi district.

Funds also went to set up a vegetable patch in the village, which the YouTube influencer described as one of the country’s “most remote and least accessible to education” locations.

The celebrity’s project sparked criticism by some, however. Pinkaew Luangaramsri, a social scientist at Chiang Mai University, described it as “an exercise by the urban middle class”.