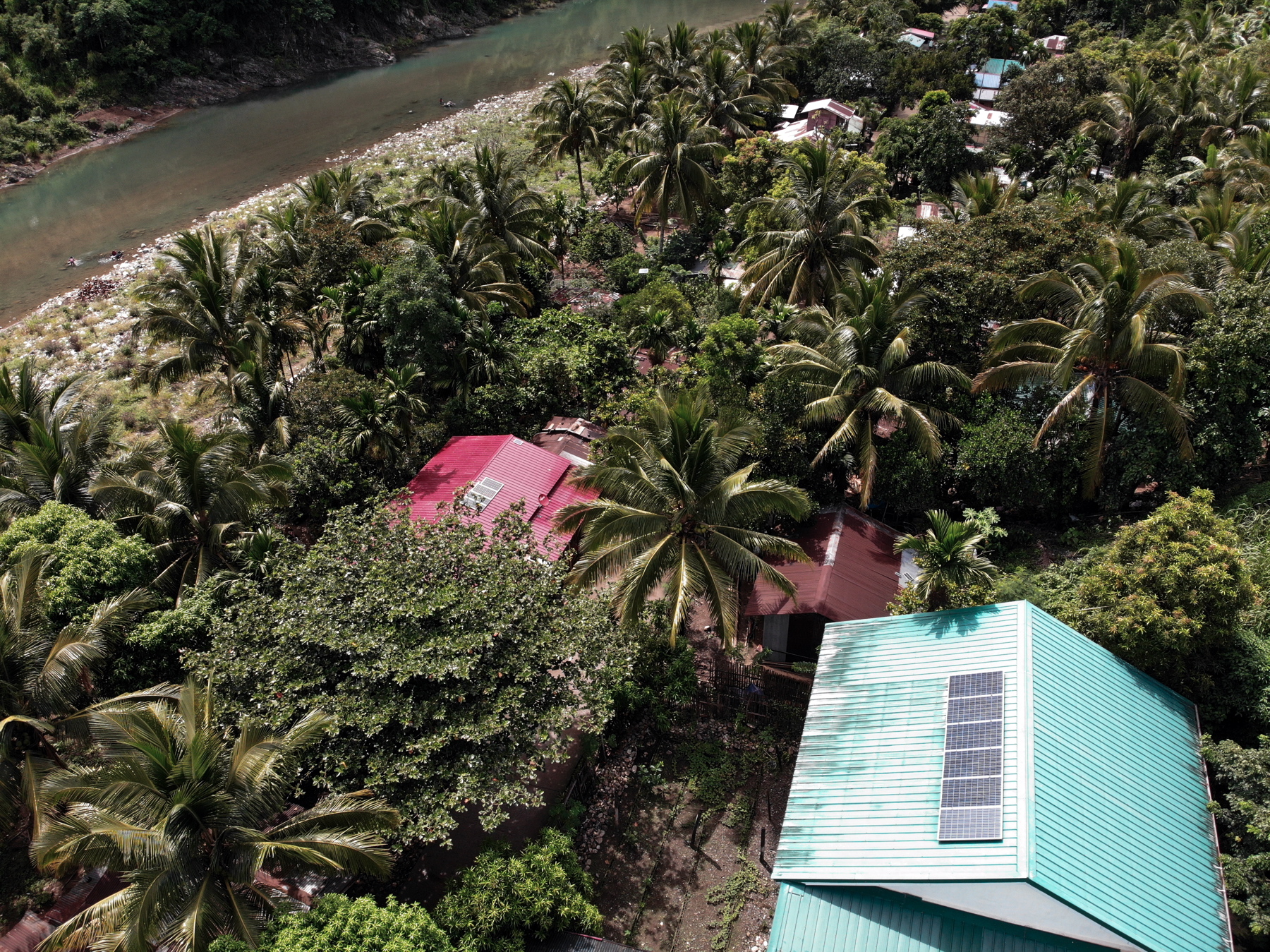 MANILA, Philippines : Up until a decade ago, nights in Sitio Manggahan — an upland settlement of the Dumagat-Remontado, indigenous people (IP) rooted in Tanay, Rizal province, since the Spanish era — limited students like Margie Amuin to doing their homework by the glow of gasoline lamps.

Then slowly, house by house, solar power technology began transforming the Sierra Madre community: tribal leaders bought panels from Manila, then private organizations donated some more. It was as though “a light switch had been turned on across Manggahan,” said Amuin, now a 34-year-old teacher, recalling one particular night in 2014.

Almost all of the 150 houses in the sitio have since gone solar, first to banish the darkness and run common household appliances, and later to improve their disaster-preparedness and facilitate the children’s online learning.

For environmental advocates, the shift, though small in scale, shows how a grassroots solution can enable people facing common challenges to “chart their own energy future.”

The Dumagat-Remontado consider a 24,000-hectare swath of Tanay mountainside their ancestral land. A 2020 census showed some 40,000 of them residing in the villages of Daraitan, Laiban and Sampaloc near Agos River, where they hold on to a semisedentary lifestyle mainly sustained by fishing and farming. (Only a few have ventured into trade; when the pandemic struck last year a number of local women turned to selling potted plants and embroidered face masks.)

But for generations the Dumagat households especially in Daraitan and Laiban have remained off-grid, according to Octavio Pranada, a farmer who serves as “papu,” or tribal leader.

A fact sheet from the Department of Energy’s (DOE) Renewable Energy Management Bureau states that it can be difficult to get power distribution companies interested in extending rural electrification programs to such locations “due to its relative unviability and unprofitability.”

It can be difficult, for example, to connect a smattering of households spread across kilometers of mountain roads.

“On windy nights, it was impossible to keep the homes illuminated, and then of course gasoline prices would also go up. And outside you couldn’t make out a single soul,’’ she said.

Plans to build dams for hydropower plants in the area — like the Laiban Dam proposed and later shelved during the administration of President Benigno Aquino IIII, and now the smaller Kaliwa Dam project that broke ground in June — are seen by the Dumagat as threats that could lead to their dislocation and their lands and livelihood going underwater, said Arturo Tahup of Institute of Climate and Sustainable Cities (ICSC).

“It’s why the government has never taken social services there seriously, because the original plan was to submerge those communities [with the construction of the dam],” said Tahup, the ICSC director for community resilience.

It was only this year that the barangay governments began a survey asking the residents of three sitios if they wanted grid electricity, said Pranada. Many expressed interest but were still worried about the installation cost and monthly billings.

In 2014, Pranada said, he learned about solar panels while listening to a radio show. He went to Raon, a street in Quiapo, Manila, known for its electronics supply and appliance stores, and bought a 1,000-watt solar panel for P6,000 and a battery for P7,000.

The setup could power 10 light bulbs, a portable TV set, and a radio for at least three days before requiring a recharge.

The farmer learned how to set everything up from the Raon vendors themselves, from the roof installation to the portable generators.

Dumagat families recently interviewed by the Inquirer gratefully named Pranada as the bringer of solar energy to their sitios. At his urging, his neighbors began buying their own panels.

“Before, our paths leading down to the plains were all pitch black at night. We had to go to the town to recharge our gadgets. That’s P50 for the fare and P30 to 40 for the charging fee,” Bandilla recalled.

In just five years, she observed, a new generation of Dumagat children are growing up without many of the hardships endured by their parents.

While the upfront cost of installation is still steep for the Dumagat, “once you have invested in it and can protect it from damage, you can use it for years,” said Shirley Bello, 58, also of Sitio Manggahan. Her 50-watt panel and 58-volt battery, plus an appliance technician’s fee, cost her about P10,000 back in 2016.

Environmentalists cite the Dumagat experience as an example of how, even without government initiative or commercial cost-benefit analysis, gains can be made in the campaign to reduce dependence on fossil fuels, whose carbon emissions are a main driver of climate change.

Per 2019 DOE data, 67.24 percent of the country’s energy mix are still drawn from coal-fired power plants, and only 32.76 percent from renewable energy sources (solar, wind and hydro).

As a signatory to the Paris Agreement, or the 2015 pact committing nations to limit global warming by 1.5 degrees Celsius, the Philippines is obligated to promote the use of renewable energy, said Commissioner Rachel Herrera of the Climate Change Commission (CCC).

“A more sustainable, climate-resilient development must necessarily include a pathway through renewable energy,” Herrera said. “This can be achieved through dialogue that is inclusive and leaves no sector behind—considering traditional and indigenous knowledge on crafting policies, empowering indigenous communities, providing support for research and development, and upholding a just transition to a resource-efficient and sustainable source of energy.”

The Dumagat serve as a “good model … to inspire the provision of assistance for other off-grid communities in rural areas so that they may access renewable and sustainable energy, while helping improve the government’s electrification targets,” she said.

As word spread about the Dumagat’s renewable energy story among advocacy and donor groups, more solar panels and related equipment arrived in the settlements as donations.

Rodel Rotaquio, for example, received a 25-watt panel from the Catholic organization Regina Regis last January, enough for a light bulb and a sound system.

“We finally did away with the gas lamps, which were a fire hazard in our nipa-paneled house,” he said.

The only school in the community, Magata-Manggahan Elementary School, was given solar panels by the private group Jeepney Club in 2019. Harnessing the system’s 1,000-watt capacity, the teachers have since been using it for their laptops, electric fans and radios.

When in-person classes were suspended due to the pandemic, the school basically doubled as a communal charging station for the students’ tablets and phones.

“[Solar energy] has become even more important to us now that the children have to study at home,” Amuin, the teacher, said. “Most parents here farm on the mountains during the day, so the only time they can really watch the kids’ learning progress is at night.”

In January, two more environmental groups—ICSC and 350.org—came to the villages to provide the residents formal training on the technology, teaching them how to adjust or maintain their installations for optimal use.

ICSC and 350.org capped the training with a donation of portable solar power generators. Two ‘’tekpaks,’’ as the sponsors called them, were stationed at the barangay hall and health center, and a third was entrusted to a tribal leader.

The donations came with a backstory: the generators were assembled by ‘’Solar Scholars,” or people also trained by 350.org in areas hit by natural disasters.

One of the tekpaks, for example, was put together by survivors of the 2013 Supertyphoon “Yolanda” (international name: Haiyan), said Chuck Baclagon, a regional campaigner for 350.org.

With solar power, the Dumagat have thus acquired a measure of resiliency generally lacking in other vulnerable communities.

As it is, they are constantly exposed to extreme weather events caused by climate change, the CCC’s Herrera said, and their situation is compounded by deforestation in the Sierra Madre and the pending construction of Kaliwa Dam in General Nakar, Quezon.

These threats are not lost on the Dumagat, who consider themselves stewards of nature and are wary of anything that will destroy their ancient ties to the land.

“I have always reminded our people about these things because our tribe loves Mother Nature,” Pranada said. “We, the elders, admit that we lacked the foresight, taking the mountains for granted, because we did not think a day would come when it would come under threat.’’

“So we’ve promised to plan ahead from now on,” he said, “so the next generations would not inherit these problems.”