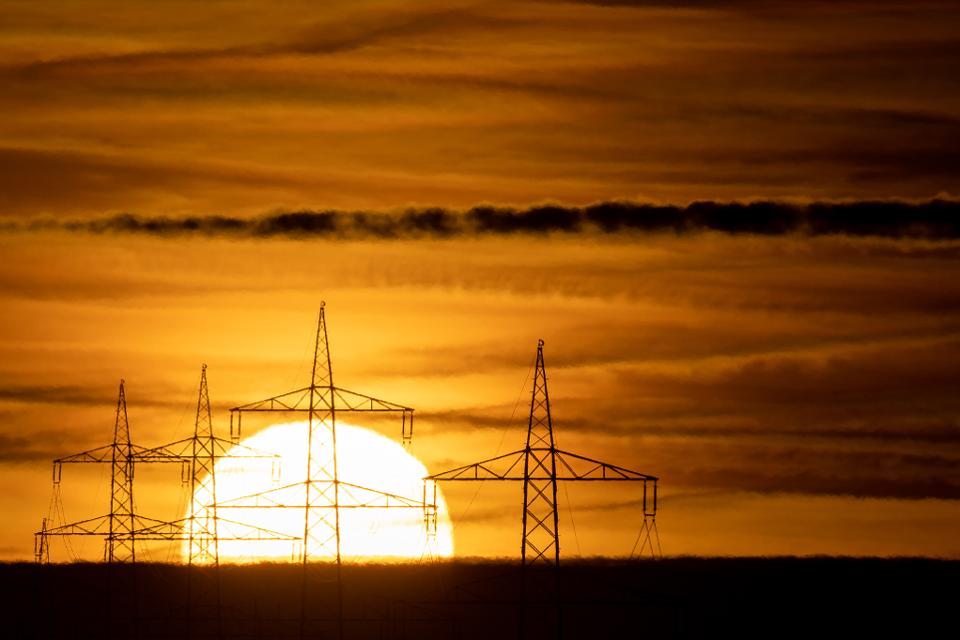 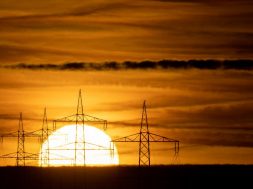 Did you hear the news about a “breed” of stocks that made investors the richest in 2019?

It’s not housing stocks, which enjoyed a record rally last year. It’s not even everyone’s beloved tech stocks like Netflix or Facebook.

This may sound like a joke if you’ve followed this sector for long, but the hands-down winner of 2019 was solar stocks. Invesco Solar ETF (TAN) ran up 51% in just a year, becoming last year’s best-performing ETF.

This ETF holds a basket of stocks that build solar parks, make solar panels and other components, all to produce solar energy. But let me tell you, last year’s 51% gain is just pennies compared to what’s coming.

Last September, Warren Buffett struck a historic deal marking the beginning of the biggest disruption in energy since the First Industrial Revolution.

I’ll fill you in on it in a moment. But first let me give you a little background.

If you are reading this with skepticism, I get it. A decade ago, green energy advocates claimed solar energy would soon power the entire planet. They said the world didn’t need fossil fuels anymore.

Governments around the world began plowing hundreds of billions of dollars into green energy. In 2008, Barack Obama signed a famous act pledging to invest a record $150 billion in solar and other green energy projects. It was one of America’s largest corporate money grants ever. 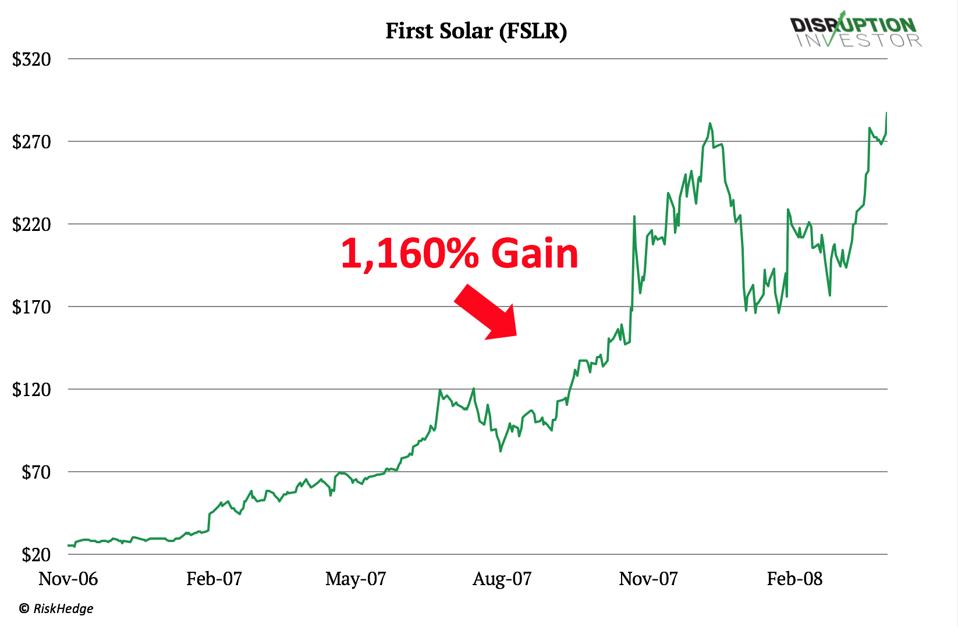 But the solar dream was way ahead of its time.

Back then, producing energy from solar cost at least 4X more than from fossil fuels. In 2009, it cost $360 to produce a megawatt-hour of electricity using solar. Natural gas cost just $70.

No amount of environmental enthusiasm or good intentions could make up for the simple fact that solar was uncompetitive. The high cost of solar power guaranteed it was not going to power the world anytime soon.

The avalanche of green dollars invested in solar went straight down the drain. And when investors realized solar was not ready for prime time, solar stocks cratered 90%+!

Quietly, solar power has improved leaps and bounds since then. Today, solar panels sell at a fraction of what they cost back in the day. They’ve also grown ten-times more efficient.

In all, the price of solar energy has cratered by 84% since 2010, according to BloombergNEF. And for the first time in history, solar energy is cheaper than fossil fuel energy, as you can see below: 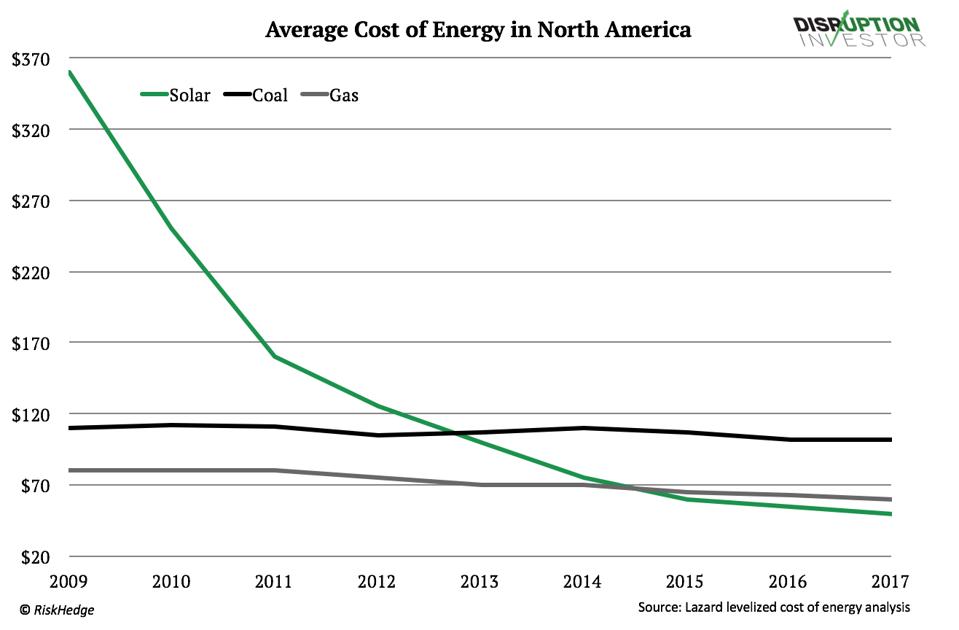 In most parts of the world today, solar is the cheapest source of new power generation. So why hasn’t the world switched the plug to solar just yet?

Cheap Solar Power Is Not Enough

While solar is one of the cheapest and cleanest sources of energy, it has one big flaw. It depends on sunshine.

Not so long ago, you would have forked over $200 per megawatt-hour of electricity just to store solar power, according to MIT. That doesn’t even include the cost of generating the electricity.

For perspective, that’s almost 3X the price of power from natural gas.

MIT researchers estimated battery costs must sink to $20 per megawatt hour if we ever want to switch 100% to solar power. That’s a 90% reduction from last year’s prices.

Scientists expected this to happen sometime towards 2030. But it looks like Warren Buffett beat their forecast by 10 years.

The Historic Solar Farm That Will Produce the Cheapest Solar Power

The farm will span 7,100 acres in the desert outside Las Vegas. It will be backed by the world’s largest battery and power 6–7% of LA’s electricity needs.

Stunning scale aside, the most jaw-dropping thing is the price of its electricity. The plant will produce energy at a cost of $20 per megawatt hour of electricity—plus $13 for storage.

In all, the plant’s power will cost $33 per megawatt hour. That’s half the estimated cost of power from a new natural gas plant!

And at $13 per megawatt hour, the storage cost is 35% below the MIT scientists’ threshold for the world to go 100% solar. Mark Z. Jacobson, a Stanford professor and one of the most vocal green energy advocates, tweeted on the news: “Goodnight #naturalgas, goodnight #coal, goodnight #nuclear.”

The Beginning of the Modern Era’s Biggest Energy Revolution

Most developed countries have vowed to go 100% green in the coming decades. And yet green energy still powers just 26% of the world’s energy supply, according to IEA.

Now that solar power has reached the historic inflection point in cost, I expect the beginning of a massive solar park buildout around the world.

The best news for investors, we are still in the early innings of this energy revolution. While the Invesco Solar ETF rallied 51% last year, it’s still down 88% from its highs, as you can see here: 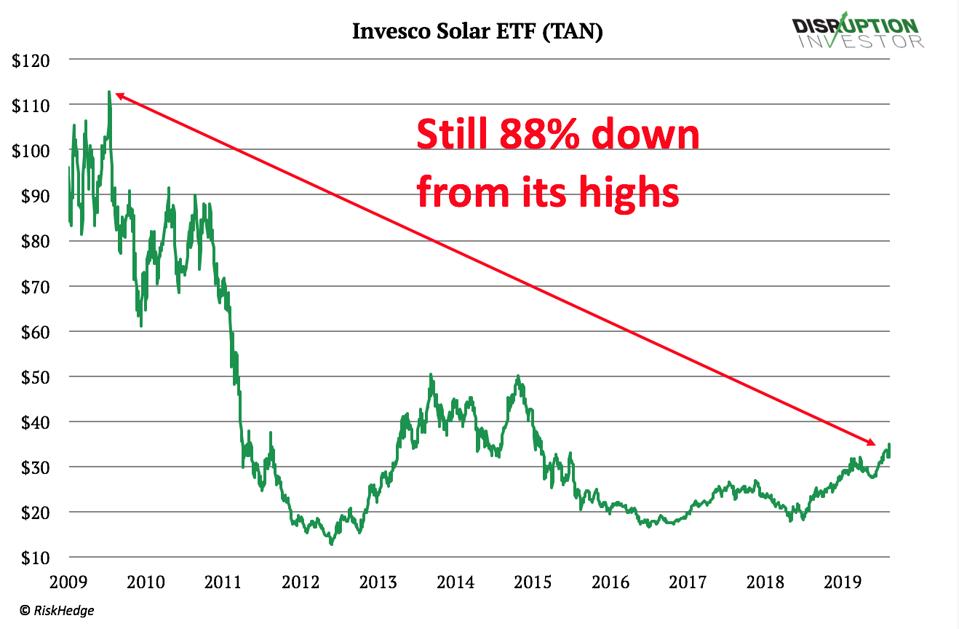 In the grand scheme of things, it has barely budged. With so much room for growth, solar stocks could easily double, triple, quadruple, or better in the coming years.