Bhutan is a small country situated between India and China, which are major producers of carbon dioxide and yet, it has managed to achieve complete carbon neutrality in the past years.

With a small population of 750,000 people, Bhutan is believed to be one of the greenest countries in the world. Practices such as planting trees in abundance and using electric vehicles have made this possible for a small nation like Bhutan. A nation built on happiness

Unlike other countries, Bhutan has discarded the concept of making government policies on the basis of the Gross Domestic Product (GDP). Instead, they have based their decisions on the country’s Gross National Happiness (GNH) index.

This concept has proved to be successful for Bhutan as 91 per cent of its citizens are narrowly, extensively or deeply happy, according to a 2015 survey.

Bhutan’s Gross National Happiness index gives the natural world a central place in the making of public policy, and environmental protection is a core guiding principle in Bhutan’s constitution.

The GNH of this nation plays an important role in the implementation of government policies which are based around four basic pillars, one of which is environmental conservation.

Earlier, Bhutan’s Prime Minister Tshering Tobgay had the goal of making his country a carbon neutral zone. His main purpose was to make sure Bhutan doesn’t contribute to the growing carbon dioxide released into the atmosphere.

His new policy of making his nation consist of minimum 60 per cent forest coverage was well received among citizens who have been planting trees excessively ever since.

After the new government came to power, Bhutan’s priority was to make the nation as environment-friendly as possible.

AFTER THE NEW GOVERNMENT CAME TO POWER, BHUTAN’S PRIORITY WAS TO MAKE THE NATION AS ENVIRONMENT-FRIENDLY AS POSSIBLE:

1
The launch of many new policies in 2009 made the carbon production decrease drastically.
2
An agreement was signed where it was stated that forest areas cannot fall below 60 per cent.
3
Along with this, the generation of hydroelectric power was promoted to decrease the burning of fossil fuels and there was a ban imposed on export water logging.
4
The government also teamed up with Nissan to distribute hundreds of electric cars among the citizen with a promise of thousands more to come. These cars were mainly distributed to discourage the use of vehicles running on fuel.
5
Apart from this, the government has also subsidized the rates of LED lights and electrical public transportation and lowered the rates on the purchase of electric vehicles.
6
The Clean Bhutan and Green Bhutan campaign has taken a lot of steps to beautify the country over the years.
7
The government has been taking steps to provide rural families with free electricity so that they don’t have the need to burn wood in order to cook food.
8
The government has also decided to go paperless soon.

In a TED talk given by Tshering Tobgay, he had admitted that his nation is not perfect. He said that like every country, his Bhutan is not without problems.

Despite this, the uniqueness of Bhutan lies in the fact that the citizens and the government have made environment conservation their priority, rather than economical growth.

Buddhists hold trees very important in their religion which is the main reason why people there are so keen on planting them.

Around 100 volunteers in Bhutan set the world record for planting the most trees in an hour by planting 49,672 trees. 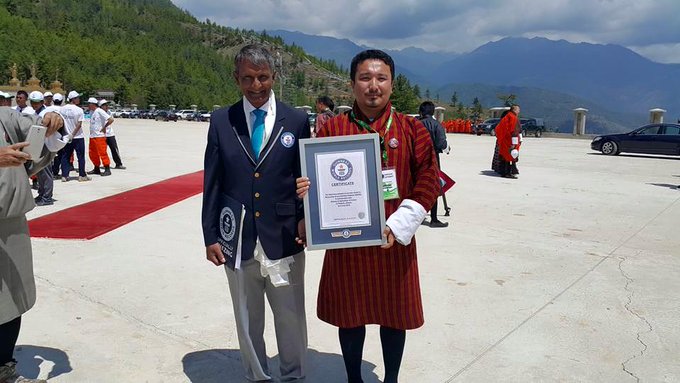 What does the future hold for Bhutan?

With the constant rise in tree plantation and forest coverage in Bhutan, the government hopes that they maintain their position on the absorption of produced carbon.

Carbon production in the world

With the increase in technological advancements and mass production of packaged products, the carbon production from factories has increased by a huge percentage.

Because of this increase, the holes in the ozone layer have been expanding, allowing UV rays to reach the surface of the earth and causing major health issues.

The production of carbon has also led to the increase in the global air temperature and is leading the pollutants to cause respiratory and cardiovascular problems in humans.