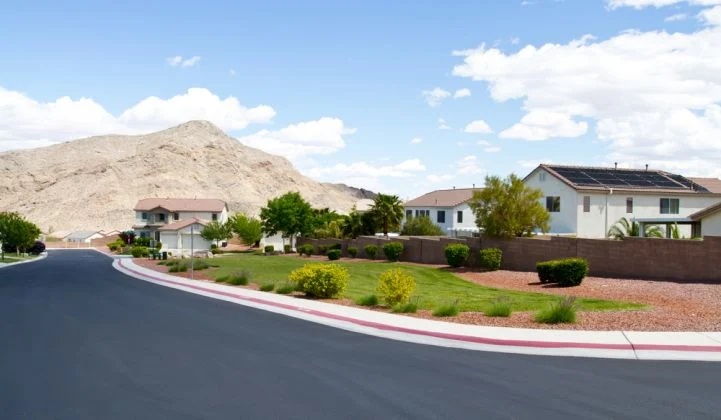 The latter describes how utilities and energy market operators are applying blockchain as a distributed ledger technology to track renewable energy from the point of generation to the point of trade. That can bring new levels of visibility and efficiency to the complex processes that govern the multibillion-dollar trade in renewable energy certificates.

Major European utilities and grid operators are already using blockchain to track and certify megawatt-hours of clean energy, and some in the U.S. are testing it out. But the same approach could be applied all the way down to the kilowatt-hour scale — or at least, that’s what NV Energy is hoping to prove.

PECs are Nevada’s version of renewable energy credits and are used to meet the state’s renewable portfolio standard requirements. Most are generated by utility-scale renewables, but NV Energy also gets them from a subset of PV-equipped customers under its Solar Energy Incentive Program.

Today, those PECs are accounted for by state regulators through a process that relies on monthly meter data and engineering calculations to certify them with the Western Renewable Energy Generation Information System run by the Western Electricity Coordinating Council. It works, but it’s time- and labor-intensive, and all in all, “just old school,” Lahav said.

Adding digital decentralized identifiers at the level of individual meters could yield a far more accurate, verifiable and efficient process, she said. NV Energy’s proof-of-concept project, approved by the Public Utilities Commission of Nevada, will allow the utility to test that proposition “from the registration of a PEC-generating system, to the retirement of the PEC, and everything in between.”

A blockchain built for distributed energy

Blockchains LLC is providing the software for the specialized meters, and Energy Web Foundation, co-founded by Rocky Mountain Institute and blockchain technology company Grid Singularity, is supplying the underlying Energy Web Chain system. Unlike the computation-heavy and energy-intensive proof-of-work blockchain systems such as Ethereum, used for Bitcoin and other cryptocurrencies, it uses a proof-of-authority mechanism that uses two to three orders of magnitude less energy, according to EWF.

That’s a vital characteristic for a system meant to speed the decarbonization of the world’s power grids, said Jesse Morris, EWF’s chief commercial officer. “Something like 90 percent of the blockchains we’ve seen out there in the energy space has been marketing” hype, he said. EWF’s mission, by contrast, is centered on “one thing and one thing alone — establishing trust with energy sector devices.”

With NV Energy, “it’s about making it…ultra-cheap and trustworthy for solar systems producing energy credits,” he said. Other partners are using the same underlying open-source architecture to certify renewable energy credits in Europe, South America, Africa and Asia, according to Morris.

Rooftop solar, behind-the-meter batteries, electric vehicle chargers and other distributed energy resources (DERs) are particularly well suited to a technology that can replace the dedicated, hard-wired equipment traditionally used to measure and verify output from large-scale generators, he noted. “There’s a big gap between all these assets that people are investing in and the grid operators” and utilities that are trying to integrate them into their grid operations and energy markets and tariffs.

Europe has led in blockchain energy projects, with widening use in clean energy certification and a small but growing number of efforts, backed by European Union mandates, to enable peer-to-peer energy trading. Earlier this month, German federal energy agency DENA picked EWF to enable a digital registry of DERs across the country, from solar and battery installations to smart thermostats and appliances.

In the U.S., the technology is largely confined to utility and grid operator testing and a handful of local energy marketplace projects from startup LO3 Energy. It’s still unclear whether the best fit for these applications will be blockchain, with its decentralized approach, or other distributed ledger technologies that centralize authority over the transactions involved.

But with DERs growing from tens to hundreds of gigawatts’ worth of capacity across the U.S., and the Federal Energy Regulatory Commission’s Order 2222 requiring grid operators to integrate them into energy markets, the need for technology to integrate them is rising, Morris said. “FERC is clearly saying we need a way for all DERs to provide near-real-time data…to somebody that’s trusted.”

NV Energy’s pilot project, which is expected to yield results next year, won’t be testing blockchain for these types of applications, Lahav said. “It really is an opportunity for us to educate the public and the Public Utilities Commission.”

But like other utilities across the country, NV Energy is developing a DER management system geared to work at a larger scale and facing state regulatory mandates to integrate DERs into its grid operations and planning. “With the PEC trading market, if people are aware of the solution, they can integrate it into their process for creating other solutions.”