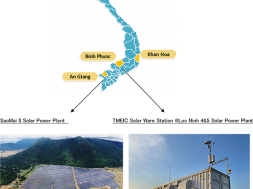 A $120 million plan in Philadelphia is underway to create a machine that will turn food scraps into natural gas.

The machine, an anaerobic digester, breaks down organic matter to produce biogas, which mainly includes carbon dioxide, methane, and water vapor. Biogas can be used to produce heat, fuel, gas, and electricity.

The technology is not new, but it has in the past typically been used for breaking down sewage sludge at treatment facilities. In the last few years, however, more companies have started to add food waste to the facilities. In the US, food is the second-largest municipal solid waste that goes to landfills, according to the EPA. This food still produces methane, but it can’t be captured and turned into a renewable source of energy.

The 22 acres selected for the Point Breeze Renewable Energy site is currently being used as a contractor parking lot and staging area for tanker trucks.

RNG president James potter said the digester will produce 3,000 decatherms per day, which is equivalent to roughly 24,000 gallons of gas. It will also produce a byproduct that Potter likened to a high-nutrient version of peat moss. That byproduct will be marketed as landscaping material and a soil amendment, which helps with plant growth.

Tanker trucks, similar to those that haul oil and propane, will transport the pre-processed slurry of food scraps. Third parties will collect the waste and bring it over to the refinery. The food scraps will be heated above 150 degrees at the facility, and the pasteurized slurry will then enter the bio reactors.

Bacteria in the eight bioreactor tanks will consume fatty acids in the waste to produce methane. The gas released this way is roughly 60% methane, which is too low for pipeline injections or compressed vehicle fuel. An upgrading system converts this gas to about 99% methane.

Potter said RNG will target buses, trucks, and fleet vehicles, adding that he hopes Philadelphia will use the company’s renewable gas for the city’s bus fleet.

“I mean, what a great concept,” Potter said. “All this diverted organic wastestream from the city goes to produce renewable natural gas that then powers the city buses.”

The RNG project is currently in its development phase, and the partners need to secure a variety of city, state, and federal permits before construction can begin. That process is underway and will last at least a year.

The project will, according to Potter, help Philadelphia come closer to meeting its goal of reducing carbon emissions by 80% by 2050. According to RNG’s proposal, the project will also bring more than 400 jobs to the city over the course of two years.

RNG previously developed the Colorado-based Heartland Biogas facility, which is the largest anaerobic digester project in the world. The digester mostly used cattle manure, though some of the waste was from municipal food.