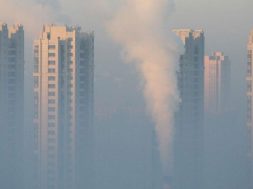 When you think of air pollution, the first country that probably comes to your mind is China. Air pollution has always been an issue for China, but things are getting serious now.

According to new reports, air pollution in China has started dimming the sunlight. That’s right. It looks like the country is putting out so much smoke that it’s essentially dimming the sun, thereby affecting solar power generation.

We’re talking about coal-driven pollution here i.e. air pollution caused due to burning coal. This coal-driven air pollution is said to be releasing so much smoke that it’s literally covering the sun, rendering solar farms useless. As noted by the folks over at Ars Technica, China has done a phenomenal job of commissioning new solar infrastructure. The country is expected to produce as much as 400 gigawatts of solar energy by 2030, which is literally 400% more than what it was doing back in say, 2010.

However, that number could have been a lot more if they would have accounted for the damage caused by decades of coal-burning. There has been a spike in the amount of particulate matter put into the air by emissions. This, in case if it isn’t obvious enough, is also a huge problem for the Chinese people.

Now let’s consider India for a moment. The rate at which air pollution is increasing in our country, it’s possible that we may have overtaken China. 22 of the world’s 30 most polluted cities are in India, remember? It’s also worth pointing out that India’s solar power infrastructure isn’t as well-established as China. India is still heavily relying on coal, and it’s here to stay despite India’s ambitious goals for renewable energy. We don’t really have to break down it down from here, do we?

It’s pretty obvious that India will also face a similar issue in the near future, if not the immediate one. So what can we do to prevent it? Well, it’s not possible to stop coal-driven pollution immediately. What we can do is at least try and control the air pollution from our end like stop bursting crackers, use EVs as much as possible, etc. The transition is going to take time, but it’s a first that we have to take to not save ourselves, but also safeguard the ability to generate renewable energy.