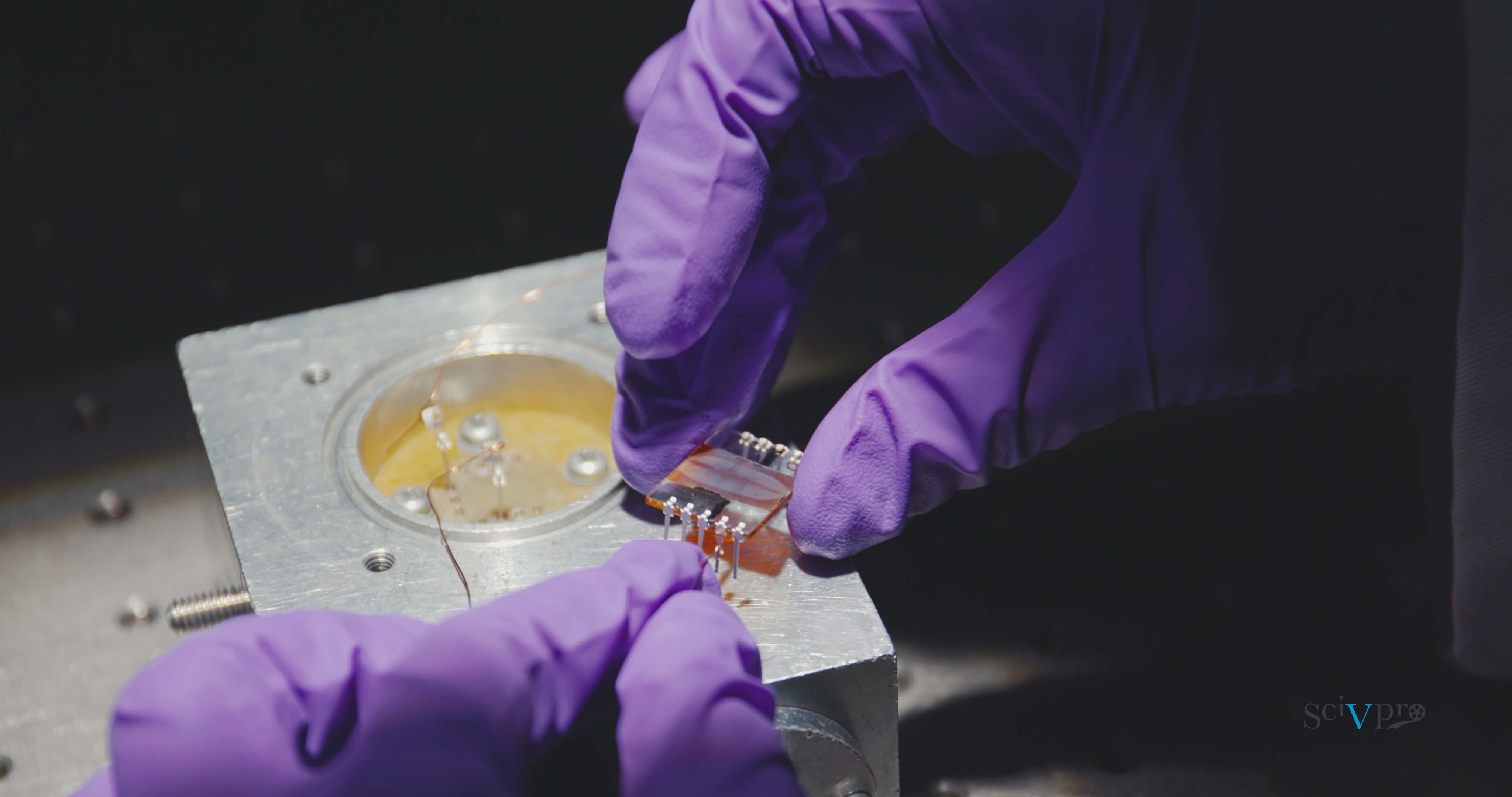 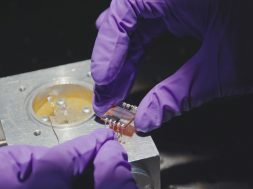 In the past few years alone, hybrid metal halide perovskite materials have revolutionized the field of low-temperature-processed solar cells, providing devices with power conversion efficiencies (PCEs) that compete with the most established decades-old commercial photovoltaic technologies. To date, studies on perovskite solar cells (PSCs) have principally been on polycrystalline film PSCs (Pc-PSCs). The record efficiency for Pc-PSCs, currently at 24.2% PCE,(1) is still far from their theoretical Shockley–Queisser limit (SQL), which is ∼30.5% PCE for a single-junction cell based on methylammonium lead triiodide (MAPbI3).(2) To approach the SQL, it is essential to improve the device’s fill factor (FF) (FF ≈ 90% in the SQL for MAPbI3 PSCs),(2) which contributes to the overall PCE. The FF is perhaps the most challenging figure of merit to improve for Pc-PSCs because losses in FF are mainly governed by the ideality factor that is related to nonradiative bulk and interface carrier recombination.(3−5) Despite marked efforts in improving the FF, polycrystalline thin films have significant parasitic nonradiative carrier recombination due to their inherent grain size and surface defects.(6,7)

In theory, single-crystal perovskites, with their orders of magnitude lower defect density and higher carrier diffusion lengths compared to their polycrystalline counterparts,(8−11) offer a chance for PSC technology to overcome the limitation of polycrystalline thin films and get as close as practical to the SQL.(12) Unfortunately, because of the challenges with their thickness control and typically device-incompatible solution-growth conditions, only a handful of groups have led the charge in the development of single-crystal-based PSCs (SC-PSCs). SC-PSCs reached their highest (PCE of 17.8% with FF of 78.6%) in a 2017 report by Huang and co-workers.(13)

Here, we realize highly efficient SC-PSCs with PCEs reaching 21.09% and FFs of up to 84.3% (under 1 sun illumination AM 1.5G). These devices, based on a ∼20 μm thick MAPbI3 single-crystal absorber layer in an inverted p-i-n architecture, set a new record for SC-PSC PCE and a new benchmark for potential FFs that PSCs should aim for, which Pc-PSCs have struggled to achieve.

The crystals were grown using a simple solution space-limited inverse-temperature crystal growth method (see the Supporting Information).(13,14) The crystal structure and optical absorption edge of these crystals are that of typical MAPbI3 single crystals (see Figures S1 and S2). A scanning electron microscopy (SEM) cross-sectional image of the MAPbI3 SC-PSC (Figure 1a) shows that the active area is pinhole- and grain boundary-free (see also top-view SEM image of the crystal, Figure S3). The smooth surface allows for the full coverage of the charge transport layers, preventing direct crystal-to-metal-electrode contact. The device follows an ITO/poly(triarylamine) (PTAA)/MAPbI3 single-crystal/C60/bathocuproine (BCP)/copper (Cu) architecture with the corresponding energy band diagram illustrated in Figure 1b. The crystal thickness in devices is typically around 20 μm (see distribution in Figure S4).

Figure 1. Characterization of SC-PSCs. (a) Cross-sectional SEM image of a MAPbI3 SC-PSCs. Note that the few nanometer-thick transporting layers at the crystal’s two interfaces are not visible at such magnification. (b) Energy-level diagram for SC-PSCs. (c) J–V curves of the champion cell in forward- (orange) and reverse-scan (blue) modes and the corresponding photovoltaic parameters under 1 sun illumination. (d) EQE spectra with the integrated JSC of the champion cell. (e) Steady-state photocurrent and PCE output at maximum power point with 0.93 V bias for the champion cell. (f) Statistical summary, based on 12 devices, of the photovoltaic parameters of SC-PSCs.

Figure 1c shows the current–voltage characteristics of our best performing cell. The reverse-scan short-circuit current density (JSC), open-circuit voltage (VOC), and FF are 23.46 mA·cm–2, 1.076 V, and 83.5%, respectively, yielding a PCE of 21.09% with negligible hysteresis. The corresponding external quantum efficiency (EQE) and integrated JSC are shown in Figure 1d. To exclude the effect of any potential error in aperture area determination, the JSC of the champion device was verified and corrected from the integrated current calculated from the EQE. The calculated JSC from the EQE measurement was only 1.2% lower than that obtained by an I–V scan for the device, which is within the expected error of solar cell J–V measurements. The steady-state maximum power output (SPO) of the champion cell (Figure 1e) shows that the PCE reaches over 21% during the first 10 s of measurement and then stabilizes at ∼20.7% for over 120 s, consistent with the J–V measurement (Figure 1c). A statistical summary of the device characteristics (Figure 1f) attests to the reproducibility of the fabricated cells and their outstanding performance.

It is useful to emphasize the experimental precautions, during fabrication and testing, required to achieve the dramatic increase in device performance. First, any spin-coating post-treatment that includes a solvent that might dissolve the charge-transporting layer beneath the active layer was avoided to ensure proper attachment of the single crystal. Second, fabrication, storage, and testing of the devices were conducted in a nitrogen-filled environment to prevent interface hydration that might lead to poor contacts. We observed that efficient SC-PSCs can drastically decrease in performance when measured under ambient conditions (22 °C, 50–55 RH); in particular, the JSC markedly decreases while the VOC and FF are largely unaffected (see Figures S5 and S6). Note that when the devices are kept under dry air, the performance does not change significantly (see Figure S7). Interestingly, the devices fully recovered after storage in N2 for ∼48 h, suggesting that the decrease is unrelated to perovskite degradation but likely a result of hydration of the single crystal’s surface, leading to poor contacts with the transporting layers.(12,15)

Our devices exhibit ultrahigh FFs (FFaverage = 82.6% and FFmax = 84.3%; Figure 1f). Our best fabricated, analogous architecture Pc-PSC and SC-PSC have similar VOC; yet despite the higher JSC of the Pc-PSC, the PCE of the SC-PSC ends up being on top because of its superior FF (see Figure S8). We confirmed that the higher FF is not a consequence of the mask area: even when the mask area is small, the Pc-PSC FF barely reaches 80%, which is still below that of SC-PSCs (Figure S9).

In summary, we fabricated MAPbI3 SC-PSCs with PCEs reaching 21.09%, which sets a new efficiency benchmark for SC-PSCs. While there is still room for larger-area SC-PSCs(16) and substantial interfacial optimization, the high PCE and FF highlight the promise of single crystals for advancing perovskite device technology, which could be a parallel development path to the one taken by their polycrystalline counterparts.