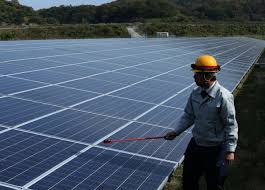 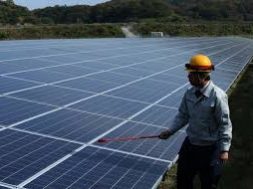 New Delhi: The government will launch a scheme to bring in global firms for setting up mega manufacturing plants in India for solar cells, batteries and solar charging infrastructure through auction and provide tax benefits on these investments.
The scheme was proposed in the General Budget presented by Finance Minister Nirmala Sitharaman on Friday.

“Government will launch a scheme to invite global companies through transparent bidding to set up mega manufacturing plants in sunrise and advanced technology areas such as semiconductor fabrication,” she said.

The government will “provide them investment linked income tax exemptions under 35 AD of the Income Tax Act and other indirect tax benefits.”

Inadequate domestic solar equipment manufacturing capacity has been an issue for the past many years especially in view of India’s ambitious renewable energy target of having 175GW by 2022.

According to Industry estimates, solar cell and module manufacturing capacity in the country is about 12GW. The project developers depend heavily on imports of equipment for setting up solar power capacities in India.

According to the Economic Survey tabled in Parliament on Thursday, India has the potential for USD 30 billion annual investment in renewables in next decade and even beyond that in view of the target of having 175 GW of clean energy by 2022.

In the budget, the government has proposed Rs 12,353.81 crore investment by Indian Renewable Energy Development Agency and Solar Energy Corporation for this fiscal, up from Rs 10,835.14 crore in 2018-19.