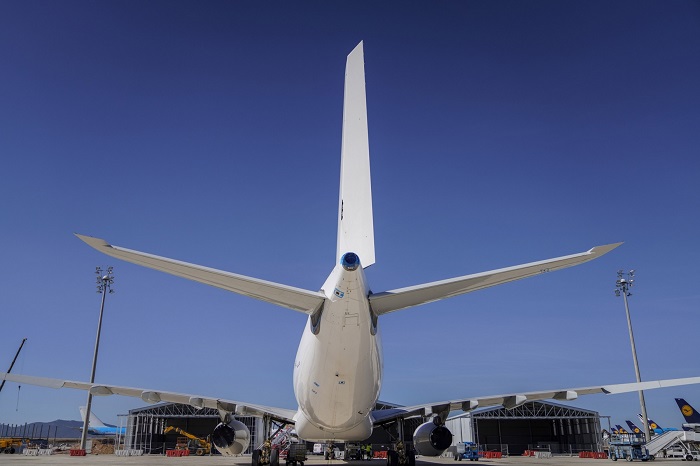 Zero-emission passenger planes will be “commercially viable in the 2030s”, powered by hydrogen produced from renewable energy sources like wind and solar. So said Glenn Llewellyn, vice president of zero-emissions technology at Airbus in an interview prior to the BloombergNEF London Summit on October 19/20.

The French manufacturer of commercial and military aircraft expects to see a “30% reduction in renewable hydrogen costs in 2030”, brought about by a combination of government support and cross-industry collaboration to scale up hydrogen infrastructure. It will take at least ten years for hydrogen fuel to become cost-competitive with “the fossil fuel equivalent,” Llewellyn said.

Aircraft design will need to change to accommodate transporting hydrogen fuel, which is less energy-dense than kerosene, he said. Concepts such as a “blended-wing body” and planes with a longer fuselage to enable the storage of hydrogen tanks in the rear were proposed by Airbus in September.

For short, urban trips, Airbus is developing “fully electric vertical take-off and landing aircraft” for market entry in the “next 5-10 years”, Llewellyn (top right) said. The battery-powered aircraft will reduce trips of 1-2 hours in length to as little as 15 minutes at costs competitive with ground transport, he said.

Read the following interview for more.

BNEF: Airbus is Europe’s largest supplier of commercial and military aircraft, so you must have a great perspective on emissions reduction technology. what do you see as the pathway to zero-emissions flight?

Llewellyn: On September 21, we revealed three concept aircraft, which explain our ambition to bring a zero-emission airliner to commercial service by 2035.

We have a few steps to take before we get there. First, we have some technology to develop and flight demonstration to do –we plan to achieve that by 2025. In the same timeframe, we need to work with partners inside and outside the industry –like energy companies, hydrogen supply companies and airports –to develop the hydrogen ecosystem, for hydrogen to be available for zero-emission aircraft in the 2030s.

Q: Is fully electric flight viable for commercial aircraft, or are other options such as hydrogen or hybrid-electric more realistic?

If we think about zero-emission, large commercial aircraft, we really need to change the energy carrier to something much lighter than batteries. This is where hydrogen starts to get interesting –it is essentially a surrogate for renewable energy on board the aircraft.

Q: What needs to happen in the hydrogen value chain to make zero-emission, large aircraft possible?

A: We are interested in genuine zero emissions, so that means the hydrogen on board the aircraft needs to come from a renewable source.

That needs to continue progressing in that same direction. We need hydrogen to be produced using that renewable energy, and there are several industries that are interested in using hydrogen to allow them to meet the Paris Agreement. Aviation is one, the trucking industry is another and maritime is also interested. We need to see that scale up over the next few years in order for the cost of hydrogen to come down to the levels appropriate for aviation.

We also need to prepare for hydrogen to come to airports, and for aircraft to be able to be refueled with hydrogen in the 2030s.

Q: So that will require collaborating with airports to require hydrogen to be refueled in a safe manner?

A: For sure –the whole topic requires a lot of collaboration outside of the aviation industry, with detailed infrastructure at airports, energy companies looking at infrastructure to get the hydrogen from where it’s produced to the airport, and with the renewable energy sector. We need part of the renewable energy to be planned and produced for the aviation industry.

Q: Will this require government support to reduce the cost of producing hydrogen from renewable energy?

A: Renewable energy and the hydrogen economy need to be supported. It is likely that over the next ten years, hydrogen won’t be more economic than the fossil fuel equivalent. Like what we’ve seen in the renewable energy sector so far, cost incentives to build the scale [would be helpful] and then with the scale, costs start to come down.

So government incentives are definitely required over the next ten years.

Q: But you do see it as viable that we get zero–emission aircraft in the sky by the mid–2030s?

Q: Hydrogen is less energy–dense compared to fossil fuel –will that not make aircraft too bulky to fly, if you need to have a lot on board?

A: Hydrogen requires more volume for a given amount of energy compared to kerosene, and this means that the overall aircraft design needs to change. In the concepts we revealed in September, some have a longer fuselage because we put the tanks behind the cabin in the very rear part of the aircraft. Other concepts that we are looking at include the blended–wing body aircraft. By definition, this concept has more volume inside it and that lends itself to using hydrogen on board. It could be the ultimate high–performance, hydrogen aircraft.

Q: So the whole design and shape of how we see aircraft today could change?

A: The last decades have seen incredible improvements in [aircraft] performance. There has been a 80% reduction in CO2 emissions per passenger kilometer since the beginning of commercial aviation. That is the starting point for the next stage of disruption –to bring aircraft emissions down to zero.

Q: In terms of fully electric flight, you mentioned that this will be best suited to short, urban routes… could you tell us more about your vertical takeoff and landing projects?

A: We are not just interested in bringing zero emission technology to large-scale, commercial aviation, but also bringing that technology to our complete product line –including helicopters and vertical takeoff and landing aircraft.

We have one demonstrator of fully electric vertical takeoff and landing aircraft completed with over 100 flights in the U.S., and another program currently underway in the south of Germany –called City Airbus.

Both of those concepts are quite visually different. One looks like a multi-rotor –with several blades on the top of the vehicle, and no wings. The other concept is a tilt- wing aircraft, so the wings actually tilt in order to transition from vertical take-off into forward flight. Those two approaches will then be combined into what we ultimately bring to market. So it is an extremely exciting space, with lots going on. That market segment is well suited to fully electric technology.

Q: What kinds of application do you see those aircraft being used for? Would it be on-demand, city transport?

A: Yes, that is definitely an application where those aircraft are extremely relevant. You could imagine for example in some cities, where it can take 1-2 hours to go from an airport to a city center –that the trip could be cut to 15 minutes with this kind of aircraft.

Because of the electric propulsion systems on board, the cost starts to even be competitive with the ground transportation equivalent. So it is really a way to bring a low-cost, high-speed alternative to ground transport for cities.

Q: When do you see that technology becoming cost-competitive?

A: Urban air mobility market and the aircraft we are developing, we expect to be at maturation toward the mid-to late-2020s. So in the next 5-10 years, seeing these aircraft flying around and carrying people.

Q: Several companies are developing concepts for electric flight, including Boeing and Uber. Is it an industry race to see who can get there first?

A: There is a need for the whole industry to reduce its climate impact. Airbus has positioned itself in a leadership position when it comes to that challenge –whether it is urban air mobility or large commercial aircraft. I would encourage any player –whether a startup or large company –to join us on this adventure and to even collaborate on eliminating aviation’s climate impact.

Aviation is an incredible service to society –connecting us physically –but we have to recognize the associated climate impact and need to bring that down to zero.

Q: What are your thoughts on autonomous flight?

A: Autonomy is definitely a very relevant technology for aviation. It can bring the cost down even further if these aircraft don’t require a pilot on board. It will be dealt with in a very step–by–step manner, where we will see initially single pilot, remotely piloted as a second step, and potentially full autonomy much later. It is definitely a huge opportunity, but it will be dealt with in discrete steps to ensure we meet all of the safety and operational objectives.