An Interview With Gina McCarthy: Pruitt, Coal Politics and the Unstoppable Rise of Clean Energy

An Interview With Gina McCarthy: Pruitt, Coal Politics and the Unstoppable Rise of Clean Energy

In the matter of: Status of Consumer Metering upto FY 2020-21 as per Regulation 8 of JERC (Electricity Supply Code) Regulations, 2010

In the matter of: Compliance of JERC (Procurement of Renewable Energy) Regulations, 2010 regarding RPO

“They’ve made a lot of announcements; they haven’t made a lot of progress,” she said in an interview on The Interchange podcast. McCarthy predicted that EPA Administrator Scott Pruitt will keep getting “slapped back” by legal challenges.

And even if Pruitt makes progress, the markets have spoken against him. “The market has already dictated that strategy, and it’s a clean energy future,” she said.

In this week’s podcast, we talk with McCarthy about the EPA under the Trump administration. We’ll talk about the viciousness of environmental politics, the coal industry’s impact on politics, shifts in the energy markets, and why she’s optimistic about the future. “The clean energy train has left the station, and it’s moving,” she said.

McCarthy is currently the director of the Center for Health and the Global Environment at Harvard University. 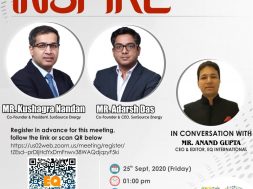