A new solar cell configuration developed by engineers at the University of New South Wales (UNSW) has pushed sunlight-to-electricity conversion efficiency to 34.5% – establishing a new world record for unfocussed sunlight.The record was set by UNSW’s Australian Centre for Advanced Photovoltaics (ACAP) using a 28 cm2 four-junction mini-module – embedded in a prism – that extracts the maximum energy from sunlight. It does this by splitting the incoming rays into four bands, using a four-junction receiver to squeeze even more electricity from each beam of sunlight.

The ‘Power Cube’ power tower received project is supported by $1.4 million funding from the Australian Renewable Energy Agency (ARENA).ARENA CEO Ivor Frischknecht congratulated UNSW researchers and said the achievement demonstrated the importance of supporting early stage renewable energy technologies.“Australia already punches above its weight in solar R&D and is recognised as a world leader in solar innovation,” Mr Frischknecht said.“These early stage foundations are increasingly making it possible for Australia to return solar dividends here at home and in export markets – and there’s no reason to believe the same results can’t be achieved with this record-breaking technology.

“It’s great to see UNSW is working with another ARENA-supported company in Victoria – RayGen Resources – to explore how the advanced receiver could be rolled out at concentrated solar PV power plants.“With the right support, Australia’s world leading R&D is well placed to translate into efficiency wins for households and businesses through the ongoing roll out of rooftop solar as well as utility-scale solar projects such as those being advanced by ARENA through its current $100 million large-scale solar round.“As they become more efficient and cost effective, over time these innovative technologies will also likely take up less space on our rooftops and in our fields.”The new UNSW result, confirmed by the U.S. National Renewable Energy Laboratory, is almost 44% better than the previous record, which reached 24% efficiency, but over a larger surface area of 800-cm2. 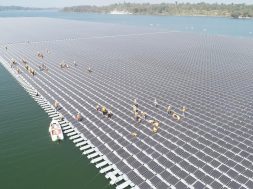