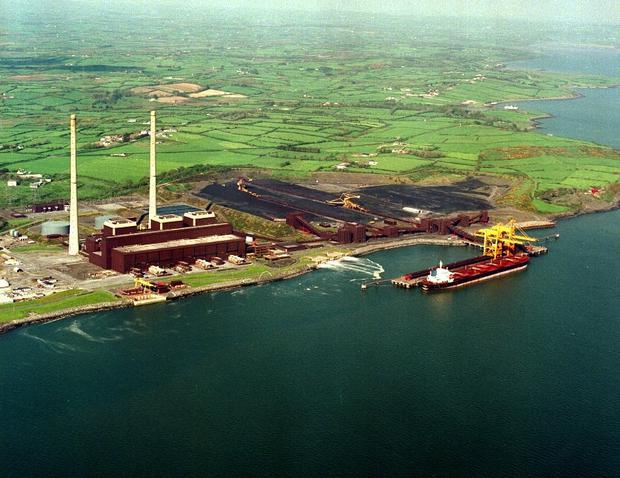 Moneypoint must stop using coal by 2025 under national climate action policy, at which point the plan is to transform the 300 acre site and its deep water port into a clean energy hub marketed as ‘Green Atlantic’.

Six hundred jobs are expected to be created during the construction of the country’s first floating offshore wind farm.

ESB is developing the project with Norwegian wind energy experts, Equinor, as a replacement for the coal fired power station at Moneypoint in Co Clare.

Moneypoint must stop using coal by 2025 under national climate action policy, at which point the plan is to transform the 300 acre site and its deep water port into a clean energy hub marketed as ‘Green Atlantic’.

Assembly of the wind turbines and construction of the foundations will take place there, facilities will be opened to other wind farm developers to use, and a major hydrogen production and storage plant will be built to convert surplus energy to fuel for transport and industry.

All elements of the project will have to obtain licencing, consents and planning permission, a process which has only just begun.

But construction will begin next month on a €50m ‘synchronous compensator’, a major piece of equipment that stabilises electricity flows when power comes from different sources at fluctuating strengths so that it can be passed smoothly on to the national grid.

It will be needed to manage the energy coming ashore through undersea cables and will also handle the mix of power that will continue come from gas fired generation and onshore wind until the grid becomes fully renewable.

If all other permissions are received, ESB expects to have the first phase of the wind farm in operation by 2028 and a second larger phase by early in the next decade.

The assembly and construction facilities would be developed in parallel with the first phase and the hydrogen plant would follow towards the end of the decade.

Around 80 workers remain at Moneypoint, which at one time employed more than 400, and ESB said they had been kept fully informed of the plans and would be priority candidates for the new jobs to be created.

Jim Dollard, ESB’s head of generation, said around 600 workers were expected to be needed during construction and many other jobs would be created for the long-term servicing and maintenance of the turbines, the running of the onshore support facilities and the hydrogen plant.

A total cost for the investment was not given but Mr Dollard said it would run to “multiple billions”.

“The cost of renewable technology is falling rapidly. It has done so over the last decade and we expect it will continue to do so over the next decade,” he said.

“But certainly you’re talking about a multi-billion euro investment for the wind farm itself, let alone the hydrogen facility and other aspects.”

The plan has been welcomed by local groups and public representatives who feared the complete loss of jobs from the shutdown of coal fired generation.