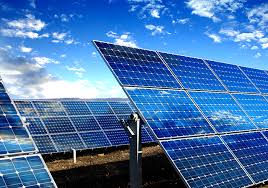 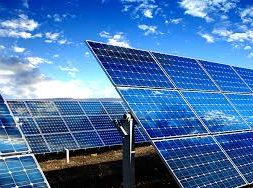 Despite recent setbacks, solar remains a bright spot in the often wobbly renewable energy sector. In the U.S., the solar market is projected to top $22.90 billion by 2025, driven by falling materials costs and growing interest in offsite and rooftop installations. Moreover, in China — the world’s leading installer of solar panels and the largest producer of photovoltaic power — 1.84 percent of the total electricity generated in the country two years ago came from solar.

There’s clearly growth — which San Francisco startup Aurora Solar seeks to capitalize on with a novel solution combining lidar data, computer-assisted design, and computer vision. The company, which develops a suite of software that streamlines the solar panel installation process, today announced it has secured $20 million in a Series A round of financing from Energize Ventures, with contributions from S28 Capital and existing investor Pear.

COO Samuel Adeyemo, formerly vice president of JPMorgan Chase’s chief investment office, said the capital will be used to expand Aurora’s engineering, customer service, and business teams and to “help accelerate” expansion. He also said that Amy Frenetic, Energize Ventures’ managing director, will join the board as part of the round.

“This funding will enable us to continue to attract the most talented engineers, marketers, customer success, and salespeople to service the fastest-growing occupation in the U.S. — the solar professional,” Adeyemo said. 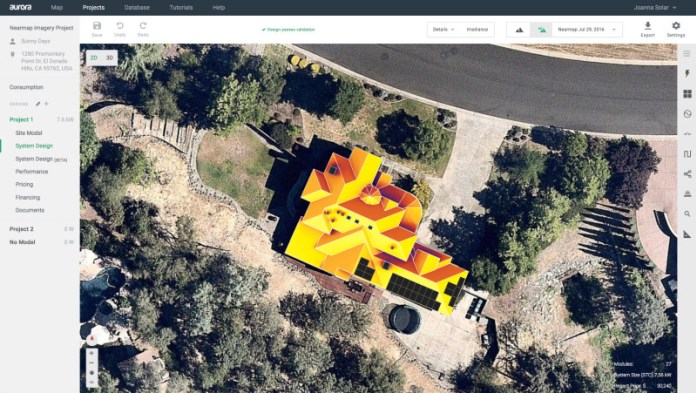 He and Christopher Hopper — both Stanford graduates — teamed up to cofound Aurora in 2013 after a frustrating commissioning experience with a solar system project for a school in East Africa. While the panels themselves only took weeks to install, planning — conducting research, calculating financials, and designing the system — dragged on for six months.

So they devised a better way, which they call SmartRoof — tech that allows solar installers to create 3D CAD models of construction sites and forecast not only how many panels will fit on the properties, but the amount of power they’ll produce and the potential energy costs they’ll save. (In some respects, it’s a bit like Google’s Project Sunroof — a geographic search engine anyone can use to discover the potential for solar energy collection in any home — albeit plenty more sophisticated.) It launched in 2015 after garnering an award from Stanford’s TomKat Center for Sustainable Energy, and following two years of development and validation tests with the National Renewable Energy Laboratory and the U.S. Department of Energy.

“Transitioning to a world powered by sustainable energy is one the biggest challenges facing our generation,” Hopper said. “[We’re] … bring[ing] the best-in-class sales and design platform to solar professionals in the U.S. and all over the world.”

It begins with modeling. Within Aurora’s CAD software, designers trace roof outlines over satellite images augmented with lidar data and use built-in edge detection tools to ensure they’re up to spec. From there, designers are able to simulate obstructions (like trees) on the panels’ sunlight exposure or sun paths and then use that data to extrapolate power consumption at various times of the year. Aurora’s suite also allows planners to plot out sites manually, using drag-and-drop components for modules, wiring, connections, combiner boxes, and ground mounts or to generate site designs on the fly algorithmically. No matter which method they chose, Aurora converts the resulting 3D measurements into 2D single line and layout diagrams while performing hundreds of checks for National Electric Code (NEC) compliance.

There’s a sales piece, too. Aurora’s solution uses system performance to model loans, leases, and cash payments and boasts proposal-building tools that let companies import calculations and other information from the project into polished, presentation-ready decks.

All of that has instilled confidence in Mar Hershenson, managing partner at Pear, who says that over a million commercial and residential solar installations have been designed with Aurora’s technology — a number that’s growing at a rate of 60,000 projects every month.

“With [billions] spent annually on solar in the U.S. and $200 billion globally, we wanted to invest in the company that is building the operating system of the solar industry,” Hershenson said. “Solar is going to have a very meaningful impact on the energy infrastructure in the world in the near future. We had the privilege of being involved with Aurora Solar from day one and see it as the leading company in this space. Doubling down has been a no-brainer.”

Aurora operates on a subscription model and offers several options: a $135 per user per month basic tier; a $220 premium tier that adds things like lidar-assisted modeling, NEC validation, and single line diagrams; and a variably priced enterprise tier for “organizations that quote thousands of systems per month.”