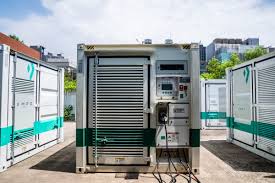 Until recently, battery-powered construction would have been too expensive a proposition. But lithium-ion battery costs have plunged 90% in the past decade as manufacturers gain experience assembling them for electric vehicles

At a project in northern Hong Kong, Gammon Construction Ltd. has swapped out diesel generators with massive lithium-ion batteries called Enertainers to power the giant cranes that erect high-rises. It’s yet another indication of how reduced cost and improved efficiency have opened the door for the technology to move into fields once thought impossible to electrify.

While construction cranes have always run on electricity, they have tended to use diesel generators because the massive bursts of power needed would drain local grids and risk blackouts. Batteries can take barely noticeable sips from the network all day and night in order to provide the giant discharges needed by the builders, with benefits that go beyond helping to limit pollution.

“We can work longer hours as it produces much less noise, it’s significantly more economical from a fuel and maintenance point of view, and our company is able to reduce our carbon and air quality emissions,” said Sammy Lai, a director at Gammon Construction, which is using the batteries for a development at Hong Kong Science Park in the New Territories.

Gammon got the batteries from Ampd Energy Ltd., a Hong Kong startup founded in 2015. It delivered its first unit about a year ago, and now has shipped 17 to seven different companies using them on 14 sites. Another 16 units are set to be delivered by the end of the year.

Others are looking at electrifying construction sites as well. Caterpillar Inc. has touted expanded electrification in its product lines. Oslo’s city government has proposed targeting zero-emission construction sites for municipal work by 2025.

Until recently, battery-powered construction would have been too expensive a proposition. But lithium-ion battery costs have plunged 90% in the past decade as manufacturers gain experience assembling them for electric vehicles, according to BloombergNEF.

Ampd sells and leases the Enertainers, which are filled with enough lithium-ion, nickel, cobalt and manganese batteries to power 25,000 iPhones. While it didn’t disclose the price, Chief Executive Officer Brandon Ng said that based on electricity and diesel prices in Hong Kong, it’s generally cheaper to lease and use one of its battery units than a traditional generator. Maintenance costs are also lower as the batteries have fewer moving parts.

Eliminating diesel generators also reduces street-level pollution and noise. In Hong Kong, which has decibel restrictions from 7 p.m. to 7 a.m., the Enertainer can allow for longer working hours depending on other equipment being used. So far Hong Kong is Ampd’s only market, although the company is looking to expand.

Electrification also can theoretically reduce greenhouse gas emissions at building sites, depending on how the power is produced. Construction usually represents just a fraction of the carbon footprint compared with the production of the cement and steel needed for the structures.

“We want to allow construction to move to a point where it can run entirely on electricity,” Ng said.

‘Double the energy density’: US gigafactory to make lithium-metal batteries to beat Li-ion