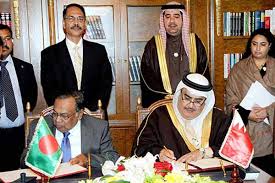 Moves are afoot to enhance community relations between Bangladesh and Bahrain and stage a trade fair to develop business ties between the two nations.

Bangladeshi ambassador to Bahrain Dr Nazrul Islam told the GDN that he was ‘hopeful’ of Bahrain collaborating with his government’s proposed projects.

Bahrain could benefit from fish farming, agriculture and other developments such as solar power, renewable energy, light engineering and pharmaceuticals as part of a joint venture, he believes.

“Trade has not been significant between the countries thus far and interaction also less than we could have hoped for,” Dr Islam told the GDN.

“There is scope for expansion, and it is positive that both chambers are interested and keen to expand the relationship. There would be mutual investment possibilities which could be tapped into.”

Bilateral trade between the two countries currently stands at $50 million a year, according to the diplomat who cited that discussions had already been initiated between traders in both countries to increase this figure.

“As part of planned venture projects, Bangladesh has created almost 100 exclusive economy zones (EEZ) in 2010,” explained the ambassador. “Around 12 countries including Japan, Korea, India, China and Russia are already in collaboration and are engaged in projects that are going in a phased manner.

“From the GCC, Saudi Arabia and UAE are in the discussion phase, while with Bahrain, we are at the initial stage.

“There are certain projects that the home government has earmarked for both domestic and foreign investors. For those interested, the government gives a lease for 50 years alongside other incentives.”

“We have pharmaceuticals, light engineering, solar power and renewable energy projects for Bahraini investors to pick from, among others.

“Bahrain, being a coastal concern too, t could also look into fish farming and aqua culture. They could also tap into agriculture, on which Bangladesh has a success story to tell from the point of view of self-sufficiency.”

Post-Covid-19 days would see more ‘physical visits’ featuring trade delegations, said the envoy, although online seminars were being lined up for the rest of this year. I’m very hopeful of collaboration with Bahrain on the economic zones, as Bahrain has a good investment climate and joint venture projects could take off,” he added.

“We foresee mutual visits of investors in the future, depending on the further development of these talks, and, at the end of next year, we are also planning a single country trade fair.

“This will be first of its kind in Bahrain in which we aim to bring in Bangladeshi businessmen to showcase business opportunities through an exhibition that could span over two to three days.”

Dr Islam was speaking to the GDN following an online meeting with the BCCI chairman Sameer Nass, where discussions were held to look at ways and means to intensify trade between the two nations.

In a statement to the media, Mr Nass said that the meeting ‘stressed on the importance of invigorating trade and exploiting more investments and partnership opportunities’.

“We (BCCI) are ready to cooperate with the embassy in all endeavours that aim at reinforcing liaison between both business communities and stepping-up trade and investment,” it added.

tags: Bahrain BANGLADESH
0
previous 100MW plants to be built at Chandpur and Inani in Cox’s Bazar
next After winning solar projects, focus is on cell, module mfg