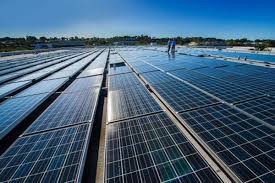 After winning solar projects, focus is on cell, module mfg

After winning solar projects, focus is on cell, module mfg

Jaipur : Rajasthan has been a leading destination for solar power developers in the country. It has the second largest installed capacity of about 5,000 megawatt compared to 7,000 MW in Karnataka, which is at the top of the list. Manufacturing was never a focus, but with a policy on solar equipment manufacturing now the state is expecting to turn the table.

The solar industry says the economic spin offs will be miniscule if India or for that matter Rajasthan only focuses on generation without giving priority to manufacturing which has immense potential for job creation and generating economic activities. As such, the operation of solar power generating plants does not require many hands compared to other industries.

In a bid to promote manufacturing of solar cells and modules, the Centre recently extended the safeguard duty by another year starting July 30. Import of solar cells and modules from China, Thailand and Vietnam will attract a duty of 14.90% up to January 29, 2021, and 14.50% from January 30, 2021, to July 29, 2021.
As relations with China are deteriorating with the border clash, the Centre has taken a number of initiatives to curb imports from China and it would not be surprising if the government levies another 10-15% basic customs duty on the solar cell and module imports on top of the safeguard duty to make imports costlier and domestic manufacturing competitive.

According to Rajasthan Solar Association, there are about 18 companies in India which manufacture solar cells with a cumulative capacity of 2,000 MW. However, RSA said the module manufacturing capacity is a little higher at 8,000 MW even though these capacities are much smaller compared to the solar targets of 100 GW that the Centre has set.

The manufacturing capacity in Rajasthan is almost non-existent and the current government has realised that it’s time to change the focus to manufacturing. Given the fact that a lot of companies are looking to set up projects in Rajasthan where large tracts of barren and semi-barren land is available coupled with the high solar irradiation that brings in 10-15% more efficiency in generation.

“In our solar policy announced last year, the state government has given a lot of incentives for manufacturing of solar cells and modules. Currently, we are thinking of creating new dedicated clusters or zones for solar cell and module manufacturing, which will be the key to building the entire-ecosystem. Manufacturing creates diverse economic opportunities, not only for the industry and the government, but also for unemployed youth,” said Ajitabh Sharma, principal secretary, energy department and chairman of Rajasthan Renewable Energy Corporation Ltd.

Sharma said the government is already in talks with three-four companies who have evinced interest in setting up manufacturing plants in Rajasthan. “The emerging international trade and commerce and the country’s focus on self-reliance have opened up new possibilities for solar cell and module manufacturing. The fact that Rajasthan is a leading destination for generation of solar power, it is uniquely positioned to drive equipment manufacturing and harness synergy,” Sharma added.

The solar industry knows why it is difficult to ignore Chinese modules which are cheaper by about 20% compared to Indian manufacturers and also there is a quality issue pertaining to the panels made in India.

“A lot depends on the government incentives if the country wants to be self-reliant on solar cells and modules, majority of which are now imported from China. Incentives on interest rates, cheaper land, lower tax and assured demand will be the key to making the cells and panels competitive. Cell manufacturing requires higher level of technology and R&D and investments are huge. So policy stability will be an important factor if India wants to compete in this field globally,” said Sunil Bansal, general secretary of Rajasthan Solar Association.

Currently, about 100 MW in solar module manufacturing is done in Rajasthan, led by government PSU REIL. This is very less compared to the 8,000 MW capacity that exists in the country. Besides the availability of land, it is also the leading location where solar projects are being set up. Bansal said that’s why, Rajasthan can also lead the country in solar manufacturing if priority is given to it.