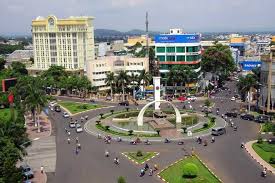 The department said the sectors most appealing to investors are wind and solar power, urban development, eco-tourism, resorts and agricultural production.

Six large renewable energy plants have been completed and commissioned.

Five other solar plants with a total capacity of 600MW are under construction. To cost 15.402 trillion dong, they are expected to begin commercial generation by the end of this year.

Recently the province has sought the government’s approval for a 7.7 trillion dong wind power project in Cu M’gar district to be built by the AMI AC Renewables Dak Lak Co Ltd.

Ha said the province has achieved average annual economic growth of more than eight per cent since 2015.

The province has gradually shifted from agriculture, forestry and fishery to industry and construction, he said.

The PCI shows it improved many indicators last year, especially the index of business support services, to rank a creditable sixth out of the country’s 63 provinces and cities.

The province has an airport and a fairly well-developed road network, with many important national highways passing through it.

With nearly 540,000ha of agricultural lands, it grows a number of high-value commercial crops such as coffee, rubber and pepper.