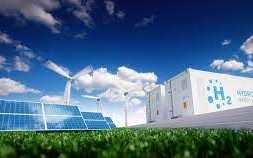 SAN JOSE, Calif. : Bloom Energy (NYSE: BE) announced today that it is entering the commercial hydrogen market by introducing hydrogen-powered fuel cells and electrolyzers that produce renewable hydrogen. These products will be first introduced to the South Korean market in 2021 through an expanded partnership with SK Engineering and Construction (SK E&C), an affiliate of SK Group. Bloom’s technologies are critical in enabling South Korea to execute on its government-mandated Hydrogen Economy Roadmap. Bloom’s existing partnership with SK E&C has already sold 120 megawatts (MW) of fuel cells in South Korea, generating over $1 billion in equipment and future services revenue for Bloom.

“The Bloom Energy Servers are a proven market leader in clean, reliable, and resilient on-site power,” said KR Sridhar, founder, chairman, and CEO of Bloom Energy. “This expansion of our product offering enables zero-carbon electricity and transportation solutions. Innovation and execution are fundamental tenets of our business and we are excited about the opportunity to advance the hydrogen economy with our long-time partner, SK E&C.”

Bloom Energy announced in June 2019 that its fuel cells could run on hydrogen to generate zero-carbon electricity. By the end of 2020, Bloom expects to ship a 100 kilowatt pilot Server to South Korea to power an SK E&C facility in early 2021. The second phase, a 1 MW hydrogen Server installation, is targeted for a 2022 deployment. Both companies have committed to fully fund and resource these two phases.

“Our three-year collaboration with Bloom Energy has reinforced to us our view that Bloom’s fuel cell technology is the best in the world,” said Jason Ahn, CEO of SK E&C. “Given the Korean government’s ambitious directive of deploying 15,000 MW of fuel cells by 2040, we forecast to sell 400 MW per year of fuel cells in the future.”

The Proven Importance of Electrolyzers

Bloom Energy’s core technology is based on research done by its founders on using electricity generated by a solar panel to produce fuel and oxygen on planet Mars for NASA. Bloom Energy Servers reversed this process by taking in fuel and air to generate electricity. Bloom is capitalizing on this technology by taking terrestrial renewable power and producing hydrogen using solid oxide electrolyzers. The renewable hydrogen, when produced in this manner, can fuel cars, power resilient AlwaysON Microgrids, or be injected into natural gas pipelines to reduce carbon emissions.

“SK Group is the leading oil and gas provider in South Korea with 3,400 gas stations,” said Ahn. “The South Korean government’s roadmap requires the construction of 1,200 filling stations to fuel 6.2 million hydrogen cars by 2040. Bloom’s electrolyzers would allow SK to play a vital role in helping to meet these targets.”

Since 2002, Bloom has been awarded 19 patents for its solid oxide electrolyzer technology. Over time, it has improved the efficiency and aggressively reduced the cost of its products and expects this trend to continue. This, combined with the rapidly reducing cost of bulk solar and wind intermittent power, should make the hydrogen generated with Bloom electrolyzers reach the U.S. Department of Energy’s goal of gasoline price parity faster than other technologies.

“Generating low-cost hydrogen from intermittent renewables is a sine qua non for decarbonization,” said Jack Brouwer, professor of Mechanical and Aerospace Engineering and director of the National Fuel Cell Research Center (NFCRC) at the University of California, Irvine. “Solid oxide electrolyzers hold the greatest potential to generate low-cost green hydrogen because of their superior efficiency, rapidly declining costs, and scalability. Achieving zero emissions in many sectors will depend upon making massive amounts of renewable hydrogen. Because Bloom is the market leader in solid oxide technology, I am very encouraged by this announcement.”

Bloom Energy’s mission is to make clean, reliable energy affordable for everyone in the world. The company’s product, the Bloom Energy Server, delivers highly reliable and resilient, always-on electric power that is clean, cost-effective, and ideal for microgrid applications. Bloom’s customers include many Fortune 100 companies and leaders in manufacturing, data centers, healthcare, retail, higher education, utilities, and other industries

This press release contains forward-looking statements within the meaning of the federal securities laws that involve risks and uncertainties. Words such as “anticipates,” “could,” “expects,” “intends,” “plans,” “projects,” “believes,” “seeks,” “estimates,” “can,” “may,” “will,” “would” and similar expressions identify such forward-looking statements. These statements include, but are not limited to statements regarding the Company’s ability to commercialize its products for hydrogen, the development of an ecosystem for hydrogen, the anticipated results of the collaboration and demand for the Company’s product in South Korea and the marketplace opportunities in 2020 and beyond; policy changes in the South Korean market and the effectiveness of the products in reducing cost. These statements should not be taken as guarantees of results and should not be considered an indication of future activity or future performance. Actual events or results may differ materially from those described in this press release due to a number of risks and uncertainties, including those included in the Risk Factor section of the Company’s Annual Report on Form 10-K for the year ended December 31, 2019, most recent Quarterly Report on Form 10-Q and other risks detailed in Bloom’s SEC filings from time to time. Bloom undertakes no obligation to revise or publicly update any forward-looking statements unless if and as required by law.