The Climate Group launched a new global program on energy productivity – EP100, an action of the We Mean Business coalition – at the Energy Efficiency Global Forum (EE Global) in Washington D.C. today, which supports influential businesses pledging to double their energy productivity and seeking to maximize economic output.

EP100 Executive Committee member, Rachel Kyte, CEO of Sustainable Energy for All (SE4ALL) and Special Representative of the UN Secretary-General for Sustainable Energy for All, said, “Energy productivity is a critical component of our new energy future. Less than six months after the Paris Agreement, leading businesses are continuing to take the ambitious climate action the economy needs. By publicly committing to double their energy productivity, these global companies are seizing the clear potential to cut energy costs, enhance profitability and avoid fluctuating energy shocks. EP100 is a step forward for bold business action – while setting us on course to achieve the world’s shared goals of sustainable, efficient energy for all.”

The concept of energy productivity aligns energy efficiency more directly with business growth and development. If more companies were to adopt energy productivity within their business models, the global fossil fuel bill could be reduced by an estimated US$ 2.3 trillion*, and create more than 6 million jobs globally by 2020. Moreover, smarter energy use is critical in reducing greenhouse gas emissions needed for global temperatures to remain below 2 degrees Celsius.

Speaking at EE Global, Mark Kenber, CEO of The Climate Group, said, “If we are to make headway on a sustainable emissions curve towards net-zero, the first step for businesses needs to be improving their energy productivity – and these leading global businesses are already seizing this opportunity.

“Doing more with less improves business performance and grows an energy-productive economy – one that enables and rewards low carbon initiative. They know it makes good business sense and will enable them to reap the economic rewards in the new era of a clean economy.”

Clay Nesler, Vice President, Corporate Sustainability, Johnson Controls, said, “We are pleased to join with other leading global companies in making a commitment to double our energy productivity by 2030 as part of EP100. Energy efficiency improvements have been a key element of our sustainability program since 2003 contributing to a 41% greenhouse gas emissions intensity reduction and over $100M in annual energy savings.”

Richard Northcote, Chief Sustainability Officer at Covestro AG, said: “We are delighted to become the first major European manufacturer to join EP100 and commit to doubling our energy productivity by 2030. We have recently announced a CO2 reduction target of 50% by 2025, from a 2005 base, of which about 40% will be from energy efficiency increases. Further committing to our ongoing energy efficiency program and extending our target level cements our intention to drive our sustainability agenda.”

The launch of EP100 comes after world leaders gathered for the Signing Ceremony of the Paris Agreement last month. In working with the world’s most influential businesses, EP100 will accelerate the transition to a clean economy and deliver national climate ambitions by driving energy productive business models.

Improving energy productivity nation-wide represents an economic value and potential for job creation, which in the United States alone could save US$327 billion annually in energy costs and add 1.3 million jobs** if energy productivity is doubled by 2030.

EP100 is led by The Climate Group and is an action of the We Mean Business coalition, with support from ClimateWorks. The campaign operates in collaboration and alignment with the Global Alliance for Energy Productivity and the United Nations Sustainable Energy for All initiative.

10
previous Gamesa reinforces its manufacturing base in India with a new blade factory
next MNRE:Draft Guidelines for Development of Onshore Wind Power Projects 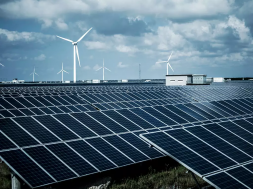