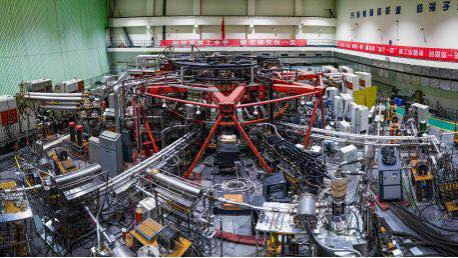 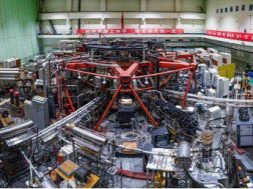 As one of the major components, the settled coil system has paved the way for the wrap-up construction of the next-generation “artificial sun,” known as HL-2M.

The new apparatus can reach an electron temperature of over 200 million degrees Celsius and an ion temperature of 150 million Celsius in its core plasma, according to its developer Southwestern Institute of Physics (affiliated to CNNC).

The device is expected to be finished by the end of the year, Duan Xuru, an official at the China National Nuclear Corporation, announced during this year’s Two Sessions. 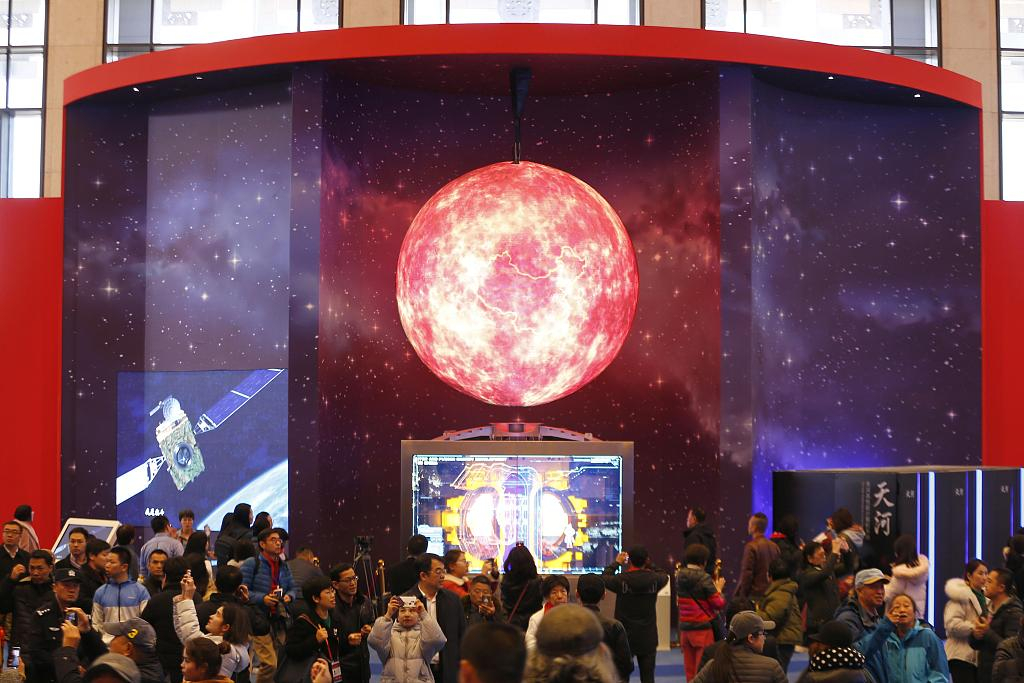 A fusion reaction model at an exhibition /VCG Photo

What is ‘artificial sun’?

Before we get to the point, we might as well take a close look at the real sun, an enormous energy source that continuously provides heat and light to help create and sustain life.

Like most stars, the sun is made up mostly of hydrogen and helium atoms in a plasma state. It generates power from a process called nuclear fusion, which is also the earliest fusion reaction scientists have ever discovered.

“Artificial sun” is simply a controllable fusion reactor apparatus designed to generate energy by mimicking the nuclear fusion process of our real sun.

The project aims to use magnetic force to combine atoms, which in turn release the tremendous energy in a safe, controllable manner.

The Tokamak is by far the most mainstream apparatus to conduct the research. 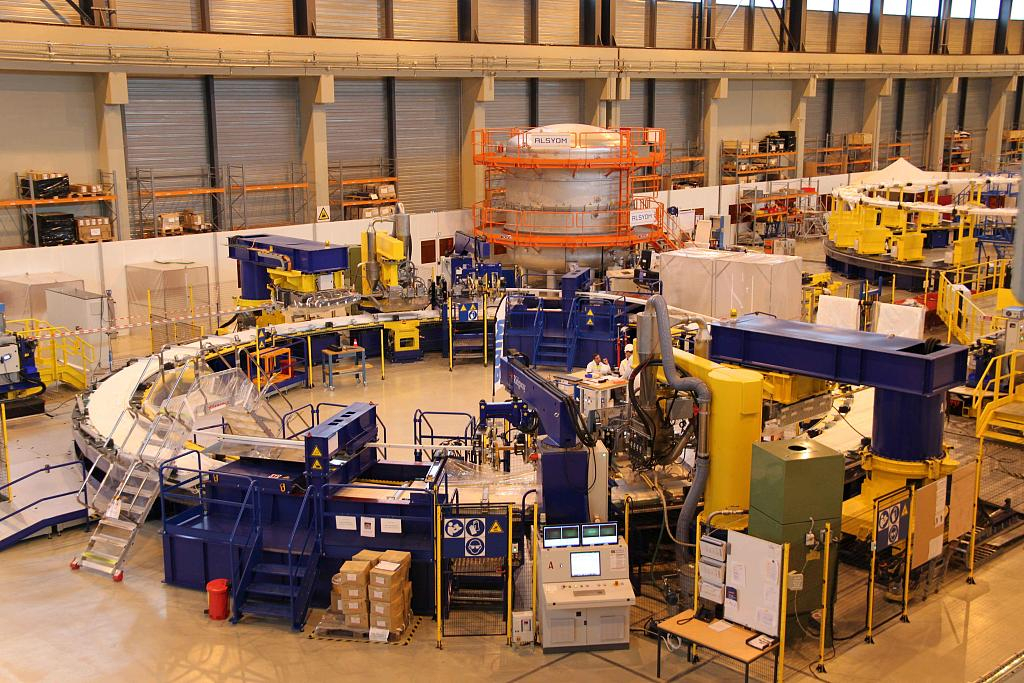 Why do we need it?

In a world faced with the dilemma of increasing demand for electricity and a worsening environment, the importance to develop clean energy has been raised to an unprecedented level. The action of shifting from fossil fuels to renewable energy has become urgent.

Unlike wind and solar energy, nuclear is always considered as an outsider of the “clean energy” conversation despite being the second largest source of low-carbon electricity in the world behind hydropower, according to the U.S. Department of Energy.

What’s more, the fuels required for the fusion are abundant and easily accessible. The substance extracted from a liter of seawater can release as much energy as burning 300 liters of gasoline in a fusion reaction. 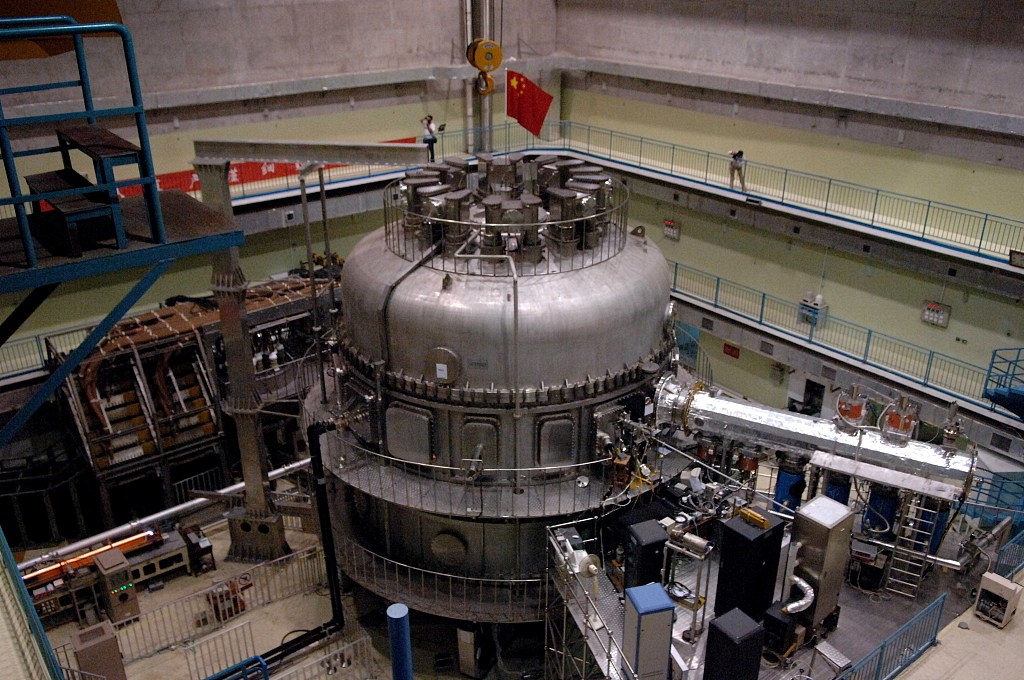 Where are we now?

Global scientific research on the fusion apparatus could date back to the late 1940s. Billions of U.S. dollars have been poured into research and development each year.

In 1985, a group of 35 industrials nations and blocs including China, the European Union, India, Japan, and Russia agreed on building the world first fusion device – International Thermonuclear Experimental Reactor (ITER)

It is designed to be the first fusion device to test the integrated technologies, materials, and physics regimes necessary for the commercial production of fusion-based electricity.

China started to build its Tokamaks in 1971. The first-generation HL-1, HL-1M has retired after serving for years. HL-2A has been in service, and HL-2M will soon join the team.

“So far, the feasibility of fusion as a large-scale and carbon-free source of energy based on the same principle that powers our Sun and stars has been proved. But all of the achievements can only last for an extremely short period of time.

“There is still a huge gap between the artificial one and real fusion reactor,” said Zhao Yang, member of Chinese Society for the History of Science and Technology who had been invited to visit the research center recently.

0
1   0
previous Right time for our solar business to get listed: Khurshed Daruvala, Chairman, Sterling & Wilson | Interview
next India to be a large market for storage batteries in two years: Khurshed Daruvala