China’s lead in the global solar race – at a glance 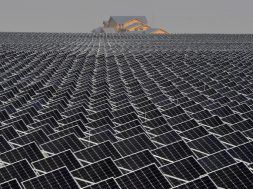 China’s lead in the global solar race – at a glance

In the space of 25 years, China will have gone from having virtually no solar panels to leading the world by a margin of more than 100%.

As countries around the world continue to increase their solar capacity, Wood Mackenzie predicts 2020 will be the last year of big growth in the industry.

China’s huge and rapidly developing population makes it the biggest energy growth market globally – although it is likely to be overtaken by India in the not-too distant future.

China already has more solar capacity than any other country in the world, and is home to several massive solar farms, including the world’s largest in the Tengger Desert. The country – the biggest clean energy investor in the world – is looking to dramatically increase the proportion of renewable energy in its power mix.

Solar is a small proportion of the country’s overall energy mix, though. In 2016, coal was a clear leader in terms of installed capacity, according to IEA data. Coal held around 60% of the share, compared to around 5% for solar.

China is also the world’s biggest emitter of carbon dioxide from fossil fuels.

The picture is changing though. China’s coal consumption has been steadily falling for some years, and alongside heavy renewables investment domestically and abroad, it has repeatedly pledged to cut back its use of dirty energy.

This said, China remains heavily reliant on fossil fuel imports. And the Institute for Energy Economics and Financial Analysis recently demonstrated the Asian power was funding a quarter of coal plants being built outside its own borders.

In contrast to countries such as Germany, Switzerland, Spain and South Korea, China is also continuing to invest in nuclear power.

China’s growing renewable energy supply will allow it to become more energy independent, and, according to a report by the Global Commission on the Geopolitics of Energy Transformation and the International Renewable Energy Agency, will put it in a very influential position as the world’s renewable energy superpower.

This will give China a competitive trading advantage and place it in a leading position when it comes to the manufacture of clean energy technology.