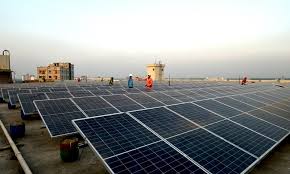 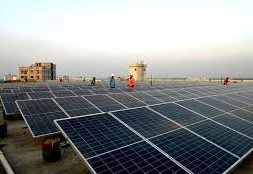 As elsewhere in the world, off-the-grid solar systems are becoming a popular form of alternative energy in Bangladesh. Nowadays many factories in the country are shifting towards solar power systems.

LDC Group of Bangladesh, a Chinese garment manufacturer based in Gazipur on the outskirts of capital Dhaka, is one of those switching towards the green power. Founded in 1997, the Chinese company is a prominent manufacturer of underwear, sportswear and outerwear garment products which are exported to Europe, North America, Australia, China and other parts of the world.

The LDC Group factories made concerted efforts to reduce its negative environmental impact that is now being called “going green” worldwide.

Engineer Nazmul Likhon, a project official, said they have two factories which have many buildings. He said on the roofs of those buildings in the factory they have installed 2,400 solar panels with a power generation capacity of each about 400 Watts.

“These inverters will be directly connected to the main lines of the factories.”

Likhon also said that all the equipment including solar panels, PP modules, textures, cable trays, cables, inverters which have been used here, all were made in China and imported from China.

He said Liz Fashion and Lida Textiles of the LDC Group may be the first companies in Bangladesh which are implementing such a solar power project.

The project equipment has been supplied by two Chinese companies, he said, without disclosing the identity of the two companies. “We’re supervising this project on their behalf.”

Jahangir Alam Joy, a senior officer of the LDC Group, said initially this was just a small plan, and later on they realized that this type of project is much better and energy efficient for the company, which is committed to switching towards green energy. “We’re, therefore, doing it from small to big size.”

“We want to give something like green energy to the society or the country as part of commitment to contribute to reducing Co2 (Carbon dioxide) emissions.”

He also said the Chinese manufacturers are contemplating to use this kind of renewable solar energy in all its future projects in Bangladesh.