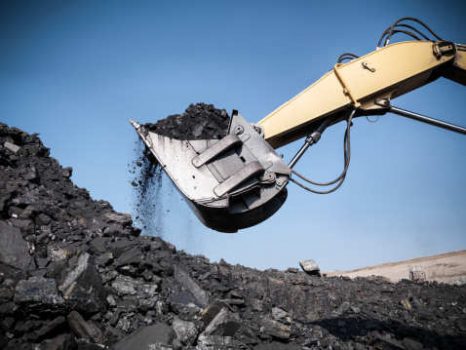 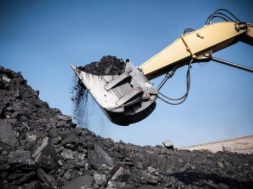 India wants to move towards cleaner energy sources, but cost and other factors make it a tall task.

Coal is dirty. Really dirty. There is no getting around that fact.

It is responsible for 40% of carbon dioxide emissions from fossil fuels. Mining coal wreaks havoc on the environment and on the people who live there. Besides CO2, burning coal produces pollutants like mercury, sulfur dioxide, which is linked to acid rain, and particulate matter, which causes respiratory illnesses.

Tackling climate change is impossible without reducing our dependence on fossil fuels, especially coal. The problem is, coal is cheap and developing economies like India prefer low-cost fuel sources.

Coal is the largest source of electricity in the world. Coal-fired plants generate 72% of India’s electricity. This, combined with the growth of coal-consuming industrial sectors like steel, is why the solid fuel source will continue to be integral to India’s economy in the next couple of decades. This is despite the government’s ambitious plans to increase generation of renewable energy.

According to BP Energy Outlook 2019, coal’s share in India’s primary energy consumption will decline from 56% in 2017 to 48% in 2040. But that is still nearly half of the total energy mix and way ahead of any other source of energy. Oil’s share, the second largest, will decline from 29% to 23%, and the contribution of renewables will rise fivefold to 16%. Even the NITI Aayog, which replaced the Planning Commission, in a 2017 report estimated the share of coal in the energy mix in 2040 to be at least 44%. “There are scenarios where the share of coal can even increase,” says Rahul Tongia, a fellow with Brookings India, a think tank. One such scenario is if India falls well short of its ambitious targets in renewable energy. 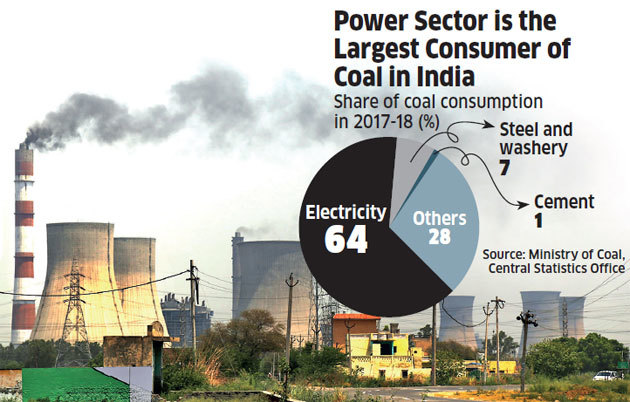 However, issues related to land acquisition, funding and policy continue to come in the way of these plans. Experts have said that it was unlikely that India would achieve these targets. Hence, the reliance on coal is not going to go down soon. 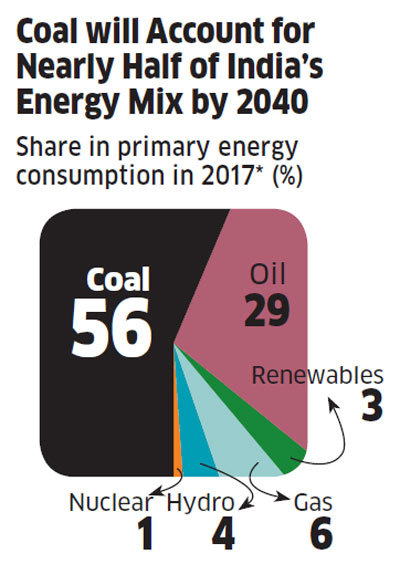 India was the world’s second largest producer of coal in 2017, the latest year for which data is available, according to the International Energy Agency (IEA). The country produced a tenth of the world’s coal, while China topped the list with 45% of global production. India was also the second largest coal importer, with a 16% share. China accounts for nearly half of global coal consumption, with India’s share at 13%.

Electricity generation is responsible for two-thirds of India’s coal consumption, steel and washery industries 7% and cement 1%, according to data from the ministry of coal. While the power sector uses non-coking or thermal coal, steel manufacturers use coking or metallurgical coal in the iron ore smelting process. Non-coking coal is also used by cement manufacturers as an energy source. 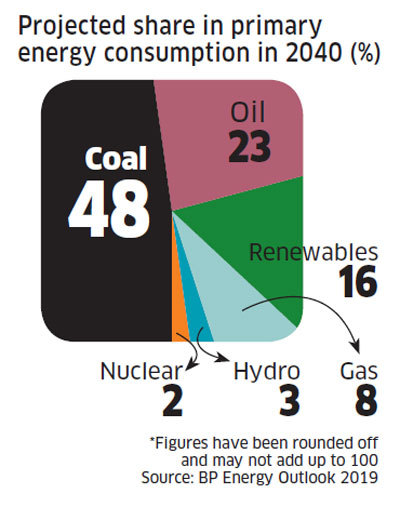 Around 87% of India’s proven coal reserves of nearly 150 billion tonnes is noncoking coal. That means India has to turn to imports to meet four-fifths of its coking coal requirements. Seshagiri Rao, joint managing director of JSW Steel, says with India’s coking coal requirement more than tripling to 180 million tonnes (MT) by 2030, our reliance on imports will continue. Indian coking coal is of poorer quality than the imported variety, forcing certain industries to import a better quality of the commodity.

Even a fifth of our thermal coal requirement is imported. Union governmentowned Coal India, the world’s largest coal miner, accounted for 84% of India’s coal production of 675 MT in 2017-18. Coal demand outstrips domestic supply and will continue to do so, though the share of imports is expected to decline, according to rating agency CRISIL. Coal IndiaNSE -0.93 % aims to have an annual production of 1 billion tonnes in five years, a target it was originally expected to meet in 2019-20. This would be a key step to pare down our import dependence. But land acquisition, environmental and forest clearances stand in the way of reaching that milestone. 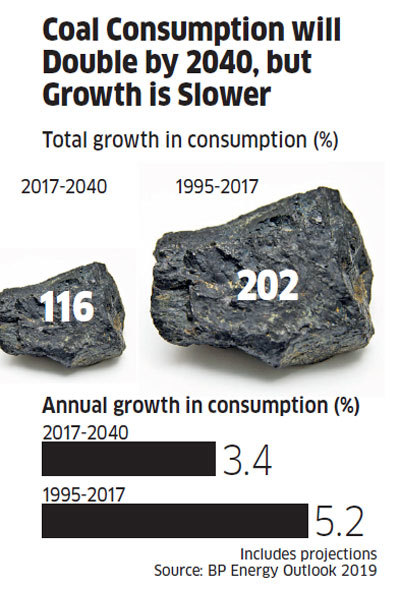 Questions sent to Coal India went unanswered. Coal-fired plants generated 72% of India’s electricity in 2018-19, according to the Central Electricity Authority. The thermal power sector, which includes coal- and gas-based plants, has had a difficult few years, especially in the private sector.

Lack of assured fuel supply and agreements to sell the power they generate, among other reasons, plunged the sector into a seemingly insurmountable crisis. The Union government last year identified 34 “stressed” coal-based projects with a total capacity of over 40 GW (India’s installed coal-fired capacity is 194 GW). These projects had outstanding loans of Rs 1.7 lakh crore.

Less than half the capacity has power purchase agreements and three-fourths have coal linkages. The government is looking to resolve the issues in the projects to keep the loans from turning bad. It has its task cut out. This mess has made industry wary of the sector as a whole. Rahul Prithiani, director at CRISIL, says most of the capacity addition in thermal power will be in the public sector.

A spokesperson at state-owned National Thermal Power Corporation, India’s largest thermal power producer, says while coal will remain the mainstay of the power sector for at least a decade, the focus will be on “competitive, environmentally complanit and flexible power generation from coal plants.”

There is an effort to make coal-fired plants more efficient by bringing down the amount of coal required to generate 1 MW and to make old coal-fired plants compliant with environment norms. JSW’s Rao says the company’s requirement of coking coal will not go up in proportion to the increase in steel production capacity due to the use of bigger and more efficient blast furnaces.

Aluminum is another sector that uses coal for its energy needs; 40% of its production cost goes into generating power. Rahul Sharma, CEO of Vedanta’s alumina business, says aluminium manufacturers should ideally be able to meet half their coal needs with captive coal blocks, with the rest being assured through linkages. Currently, the group has just one captive coal block with a capacity of 1.6 MT per annum, while its requirement is 25 MT. The block was awarded to Balco, a subsidiary of Vedanta. 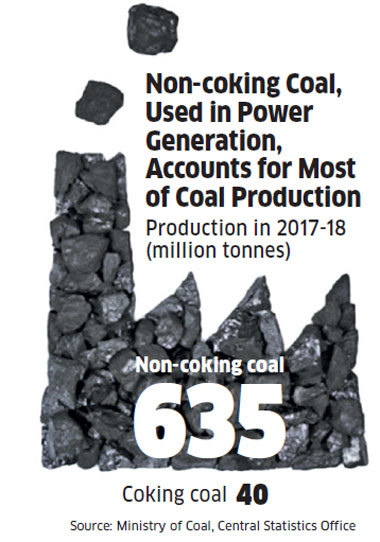 Till battery technologies to store solar power improve and become cost-effective, the country’s peak electricity demand will have to be met by thermal power, especially as the outlook for hydel and nuclear power is not all that rosy. Ashok Khurana, director general of the Association of Power Producers, says if the government has to provide 24X7 power for all, around 25 GW of capacity will have to be added. 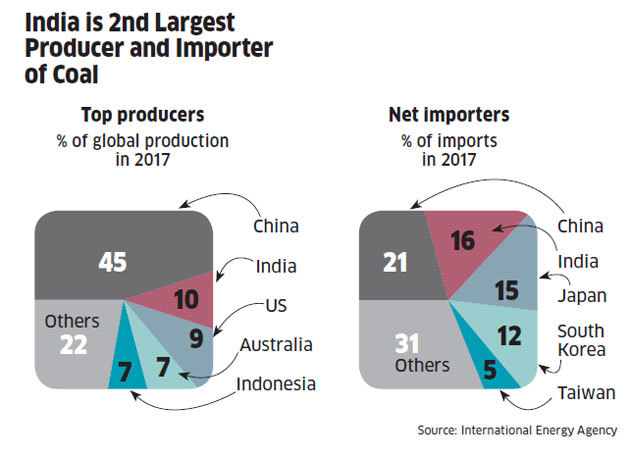 One of the key reasons for the woes of the thermal power sector was the Supreme Court’s 2014 decision to cancel 204 coal blocks allocated since 1993, calling the allocations illegal and arbitrary. In 2015, the Union government passed a bill to award these blocks through auctions and allotments. The government has so far awarded 85 coal mines, including 24 captive blocks to the private sector, under the Coal Mines (Special Provision) Act, 2015.

But CRISIL’s Prithiani sounds a note of caution: “For private companies that have won mines in auctions, their weak financial position and lack of PPAs is a bigger challenge than environmental issues.” In February 2018, the government decided to end the monopoly of Coal India.

Private companies could now bid for mines not just for their use, but also to sell the coal to others, which only Coal India could do till now. This was the biggest step in freeing up the sector since coal mines were nationalised in the early 1970s. 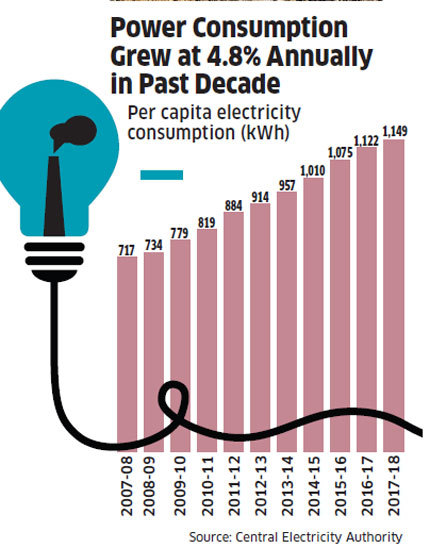 Though it has been more than a year since the announcement, there has been no auction yet for commercial mining and the terms of the auction are not yet clear. “For commercial mining to work, there should be no cap on prices. If there is a cap, there will be less competition,” says Vinay Prakash Goel, CEO for coal and mining businesses at Adani Enterprises, which operates nine coal blocks given to PSUs under the mining developer and operator model.

A Coal India official, requesting anonymity as he is not authorised to speak to the media, says commercial mining by the private sector will make the miner more competitive. “But we have seen what has happened with mines auctioned to the private sector. Getting things moving on the ground is very difficult.”

Even with its continued reliance on coal, India is expected to meet its commitment made under the Paris Agreement on climate change to cut emissions relative to the GDP by a third by 2030 from 2005 levels. India is the third largest CO2 emitter among countries but per capita, its emissions are only 40% of the global average, according to the IEA. 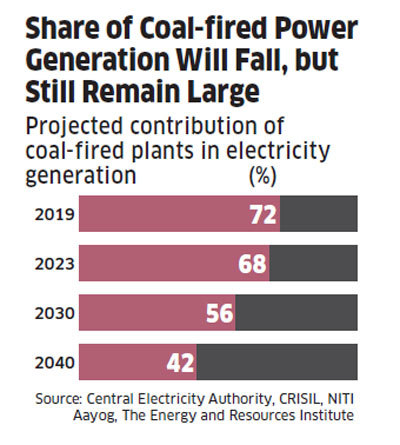 If the Indian economy is to continue to grow at 7%, the rise in electricity demand from industry and households cannot be met by wishing away coal-fired power, especially not till renewable energy becomes a reliable and affordable alternative to thermal power.