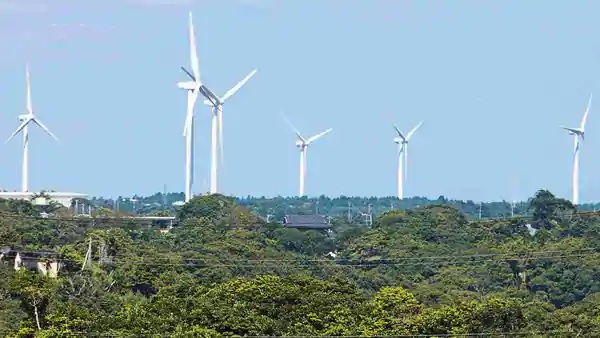 London and New York, July 13, 2020 – Renewable energy capacity investment showed great resilience in the first half of 2020, in the face of the unprecedented economic shock caused by the coronavirus, according to the latest figures from research company BloombergNEF (BNEF).

The data, drawn from BNEF’s world-leading database of deals and projects, show that one sub-sector of renewables – offshore wind – had by far its busiest half year ever for final investment decisions, and this more than offset declines in investment in solar, onshore wind and biomass.

Offshore wind financings in 1H 2020 totaled $35 billion, up 319% year-on-year and in fact well above 2019’s record full-year figure (a revised $31.9 billion). The first half of this year saw investment decisions made on 28 sea-based wind farms, including the largest ever, the 1.5GW Vattenfall Hollandse Zuid array off the coast of the Netherlands, costing an estimated $3.9 billion.

Other major offshore deals included the 1.1GW SSE Seagreen project off the U.K., at an estimated $3.8 billion; the 600MW CIP Changfang Xidao array off Taiwan, at an estimated $3.6 billion; and the Fecamp and Saint-Brieuc projects in French waters, together totaling 993MW and $5.4 billion. There were no fewer than 17 Chinese installations financed, led by the Guangdong Yudean Yangjiang Yangxi Shapaat 600MW and $1.8 billion.

Albert Cheung, head of analysis at BNEF, commented: “We expected to see Covid-19 affecting renewable energy investment in the first half, via delays in the financing process and to some auction programs. There are signs of that in both solar and onshore wind, but the overall global figure has proved amazingly resilient – thanks to offshore wind.”

Tom Harries, head of wind analysis, said: “Offshore wind is benefitting from the 67% reduction in levelized costs achieved since 2012, and to the performance of the latest, giant turbines. But the first half of this year also owed a lot to a rush in China to finance and build, in order to take advantage of a feed-in tariff before it expires at the end of 2021. I expect a slowdown in offshore wind investment globally in the second half, with potentially a new spike early next year.”

Investment in new biomass and waste-to-energy plants fell 34% to $3.7 billion, while that in geothermal jumped 594% to $676 million. Small hydro projects of less than 50MW attracted an estimated $576 million, down 14%, and biofuel production plants $250 million, down 82%.

Angus McCrone, chief editor at BNEF, said that a clearer picture of the impact of Covid-19 on green energy investment will come with the full-year 2020 figures. “Renewables have been helped by vastly improved competitiveness and by investor appetite for assets offering secure cash flows. However, project developers face the challenge that key people, whether at the permitting, financing or construction stages, can’t meet face-to-face. And buyers of small-scale solar systems are sensitive to changes in consumer confidence.” 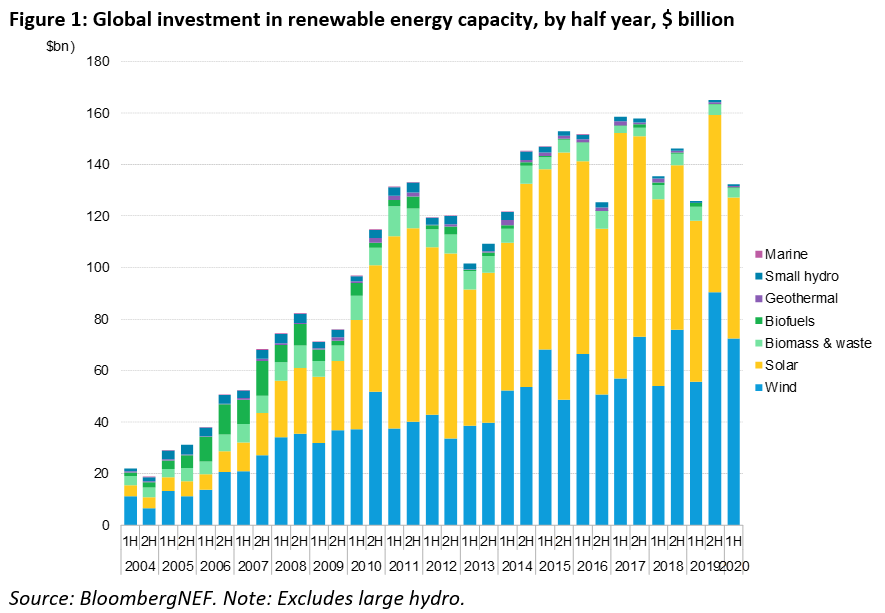 BNEF’s data for corporate-level investment in renewables and energy-smart technologies such as battery storage show that equity raising by specialist companies on public markets was $2.4 billion in the first half of 2020, down 43%. Investment from venture capital and private equity funds was up 10% at $2.5 billion.

The biggest deals on public markets were initial public offerings by two Chinese solar companies, Jinko Power Technology and Trina Solar, raising $366 million and $359 million respectively. The top ones in VC/PE were private equity expansion round for Altus Power America, a U.S. solar project developer, totaling $850 million; and a PE round of $300 million for Scale Microgrid Solutions, a U.S. company putting together energy systems involving solar and batteries.

Overall clean energy investment, including renewables capacity financing and corporate-level equity deals, came to $137 billion in the first half of 2020, up 4% on 1H 2019’s $131.9 billion.

About BloombergNEF
BloombergNEF (BNEF) is a leading provider of primary research on clean energy, advanced transport, digital industry, innovative materials, and commodities. With a team of experts spread across six continents, BNEF leverages the world’s most sophisticated data sets to create clear perspectives and in-depth forecasts that frame the financial, economic and policy implications of industry-transforming trends and technologies. Available online, on mobile and on the Terminal, BNEF is powered by Bloomberg’s global network of 19,000 employees in 176 locations, reporting 5,000 news stories a day. Visit https://about.bnef.com/ or request more information.

About Bloomberg
Bloomberg, the global business and financial information and news leader, gives influential decision makers a critical edge by connecting them to a dynamic network of information, people and ideas. The company’s strength – delivering data, news and analytics through innovative technology, quickly and accurately – is at the core of the Bloomberg Terminal. Bloomberg’s enterprise solutions build on the company’s core strength: leveraging technology to allow customers to access, integrate, distribute and manage data and information across organizations more efficiently and effectively. For more information, visit Bloomberg.com/company or request a demo. 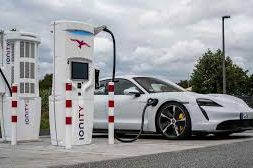