Commentary: More of a good thing – is surplus renewable electricity an opportunity for early decarbonisation?

Commentary: More of a good thing – is surplus renewable electricity an opportunity for early decarbonisation?

We are entering a world where renewables will make up an increasing share of our electricity supply –the electricity sector was the leading sector for energy investment in 2018, the third year in a row that this has occurred.

This trend is set to continue. In WEO 2018’s New Policies Scenario, 21% of global electricity production is projected to come from variable renewables by 2040, up from 7% in 2018, supported by about $5.3 trillion of investment. The EU share is even higher at around 39%. In our more ambitious Sustainable Development Scenario, which aims to get energy system emissions down to levels consistent with the Paris goals, variable renewables are projected to supply 38% of global electricity in 2040 (44% in the EU), a level that would require nearly $8.5 trillion of generation investment.

Regardless of scenario, this rapid expansion of renewables will inevitably lead to particular challenges to operating power systems. This is best highlighted by the so-called duck curve, made famous by the California ISO. 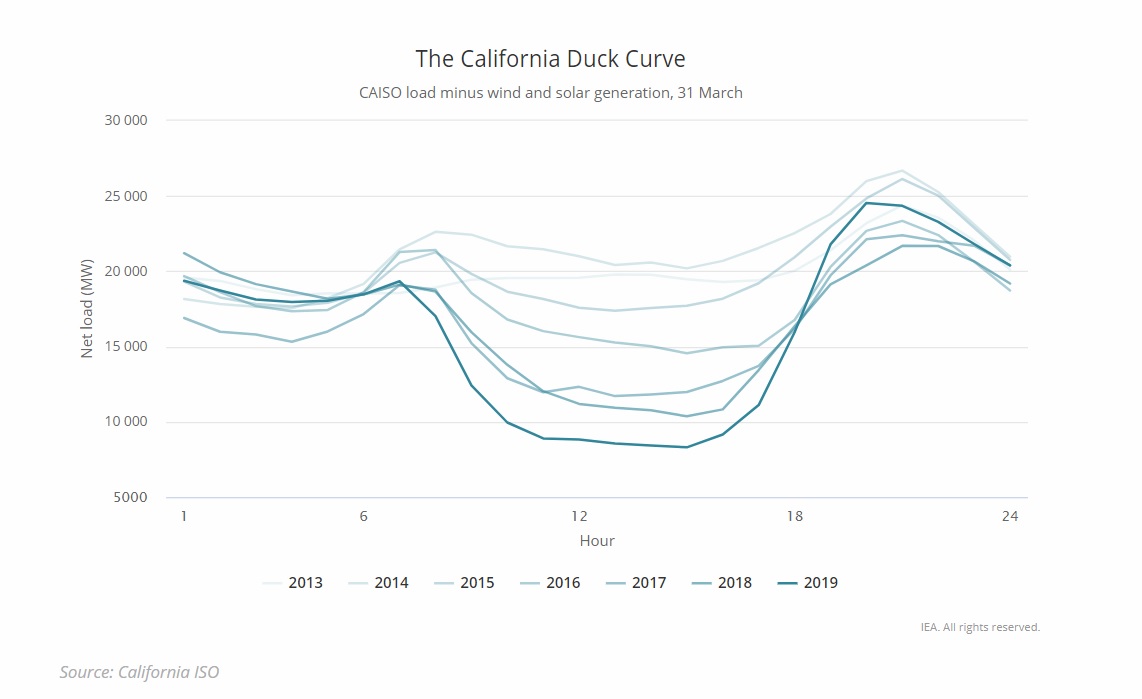 The duck is growing faster than anticipated. Five years ago, the California ISO had expected California midday demand to drop over 40% on a sunny spring day by 2020 thanks to the growth of small solar PV systems. In fact, by 2018, the spring mid-day demand on the high voltage system had already decreased by two thirds. The consequent increase in supply required in the late afternoon as solar production recedes, was already close to 15 GW, significantly greater than the 2020 anticipated level of 13 GW. 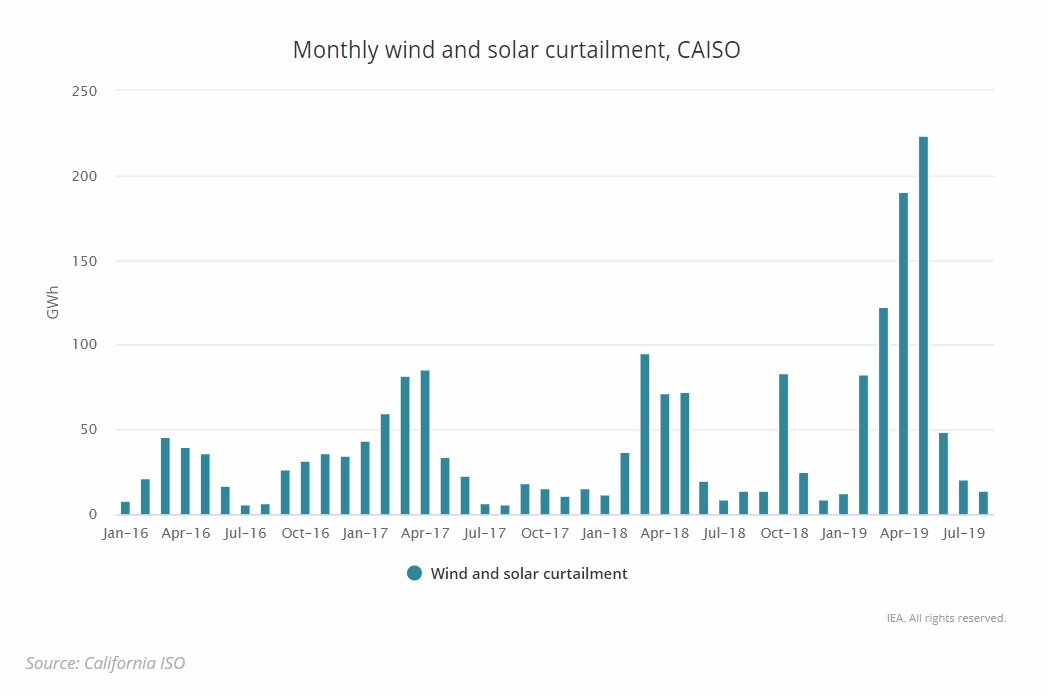 The result is that some excess supply needs to be curtailed to balance the system. While the percentages of solar and wind production that have to be curtailed in California are rather small, in other jurisdictions the share is more significant.

In China, for example, the national average for wind curtailment was around 7% in 2018, with much higher levels in certain provinces. In the Canadian province of Ontario about one quarter of variable renewable generation in 2017 had to be curtailed, along with cuts in nuclear and hydropower output. This was in a jurisdiction where wholesale market prices were zero or negative almost one-third of that year.

One of these insights is that renewables integration can be divided into a set of six phases dependent partly on the share of variable renewables in the system, but also on other system-dependent factors such as the share of storage hydro and interconnections. 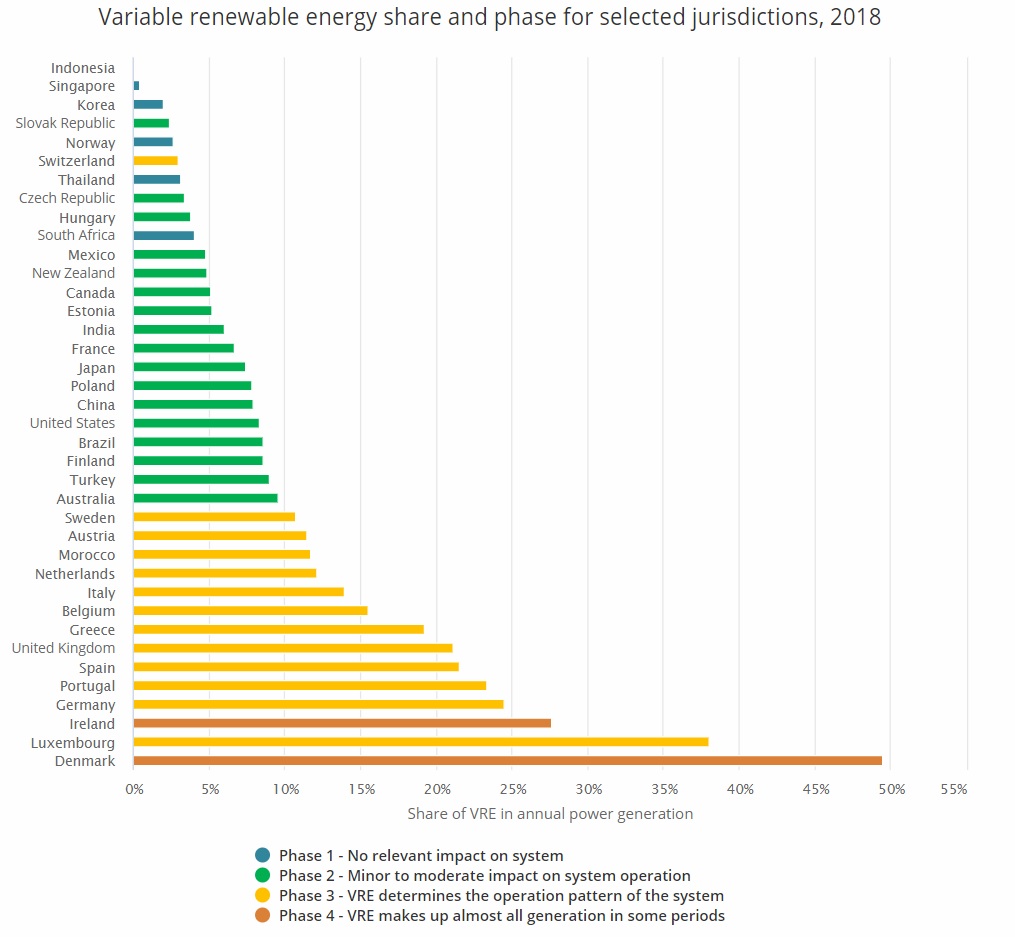 Two countries have already reached Phase 4. Denmark, which has been a leader, has the significant advantage of strong interconnections to handle both surpluses and shortfalls. Ireland has much weaker interconnections and additional measures have been needed to ensure short-term system stability.

No country is yet in Phase 5 (where production can exceed demand) or in Phase 6, where seasonal storage solutions would be needed to match supply and demand.

Strong renewables policies are expected to continue to favour wind and solar power for the foreseeable future.  This will mean that by 2030, we expect more countries, particularly in Europe, to evolve to these higher phases. 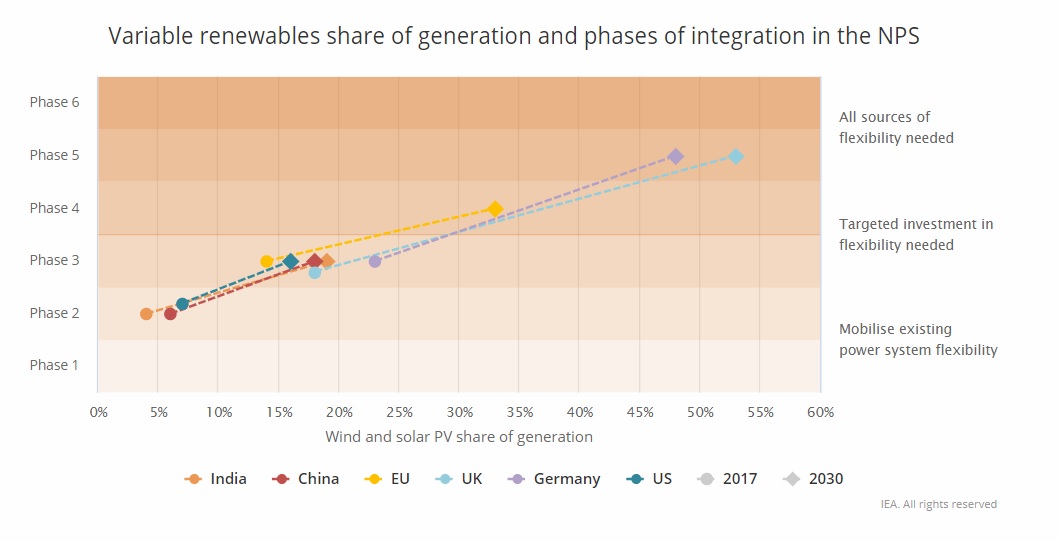 Too much of a good thing?

As more countries move to higher shares of VRE, it appears that there could be “too much of a good thing” – excess generation that may have to be curtailed and appears as wasteful.

The tendency is to treat this primarily as a technology problem for the power system to solve. Indeed part of the solution will lie in improvements in technology. We will need some form of energy storage to convert the excess at one time of day into necessary power system supply at another. Smart grids, especially smarter distribution systems, will be better able to manage increasing shares of renewables as well – and they too will likely have more energy storage. And finally, the growth of EVs (currently driving global battery demand) represents a huge potential source of storage and demand-side flexibility as well.

But treating this only as a technical problem is missing the economic perspective. Trillions of dollars of investment in renewables is expected in the coming years, and so there is a risk that billions of dollars of renewable electricity – zero marginal cost, zero carbon – could be wasted.

Economists have their own tools for solving these type of problems. Many would see not a problem but an opportunity – offering surplus electricity available at a zero (or low) price to customers during periods of surplus is a means to manage this surplus efficiently.

However, if low wholesale prices were passed on as low retail prices, we would expect customers to be more accepting.  While most small customers might not be expected to respond on their own, low dynamic prices create opportunities for innovators to develop technologies and processes that would make it easy and profitable for the customer to respond.  Many of these will involve using the electricity to replace, at least in part, an energy service provided by fossil fuels. In this way, it can help hasten the decarbonisation goal of the clean energy transition.

Unfortunately for now, there are a range of barriers in our current policies that prevent electricity customers from seeing these prices: the level of electricity taxes, the design of electricity tariffs and more broadly our approach to the electricity demand side. This means there is a need to change outdated policies.

Much of our electricity policy dates from a period where wasteful consumption led to an increasing number of power plants – particularly fossil and nuclear plants. Indeed, electricity was considered to be a particularly inefficient means of achieving a level of energy service.

This has affected the way and level at which electricity is taxed, the way regulated prices are designed, and perhaps most challenging of all, how we address demand side policies and particularly electricity efficiency.

But now we are entering a different era, an era where most of the incremental electricity generation will come from wind and solar power. How should it change our taxation, rate setting and electricity efficiency policies?

Economics should guide us so that:

Electricity taxes that exist in many countries today were set as a result of either a deliberate policy to reduce electricity consumption in energy importing countries (Europe) and/or environmentally conscious jurisdictions (Europe, California). They have also provided an easily enforceable tax base for municipalities and subnational jurisdictions. These taxes can be quite substantial, amounting to over half the cost of power for households in some European countries. 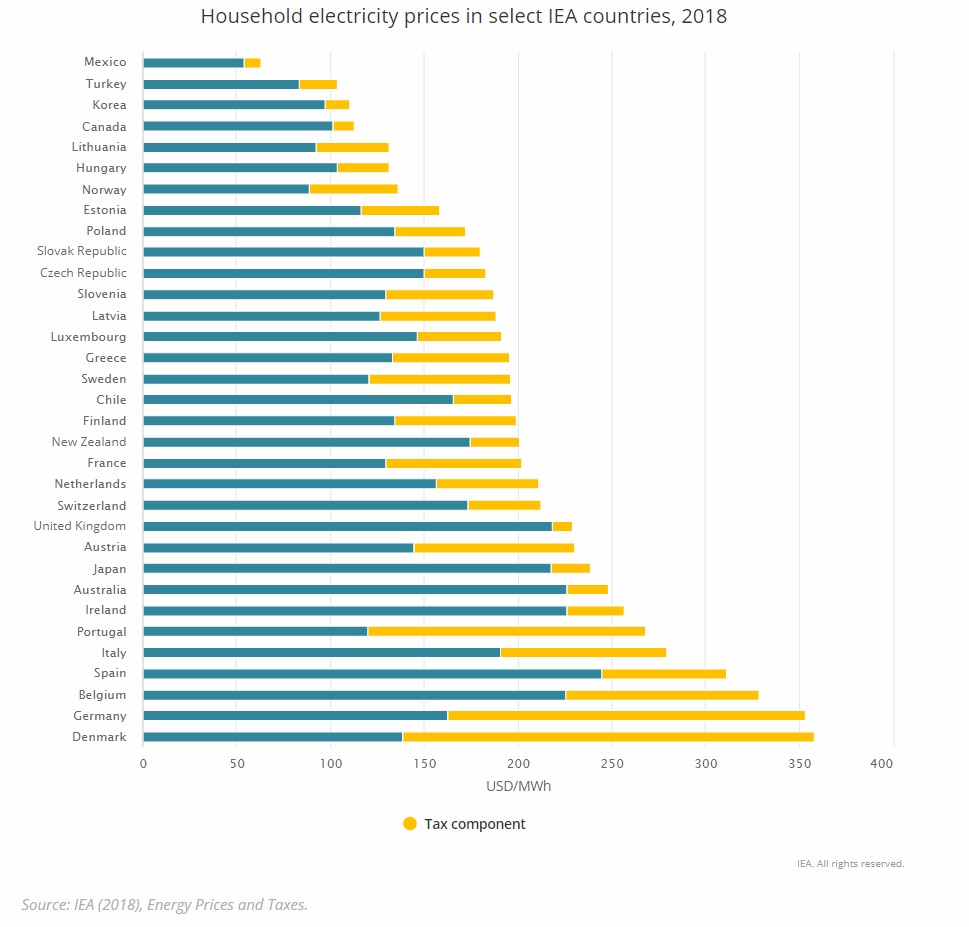 Yet many of the reasons for taxing electricity heavily are no longer valid. The emissions argument in particular makes little sense in highly decarbonised power sectors such as Sweden, France, or Switzerland.

Germany is probably the best known example. Although prices in the wholesale market can fall to zero when wind and solar power are particularly prolific, the end user cannot buy electricity at the real time price, but even if that were possible, it would mean paying the EEG payment (which is intended to recover the cost of renewables) which is currently 6.405 euro cents per kWh. This means that the end user incentive to use that renewable energy to substitute for fossil fuels in their own consumption is blunted.

What needs to be done instead is to encourage customer response based on the real-time price for power. Most other costs should no longer be recovered on a per kWh basis.

Getting prices right for the end consumer means also addressing regulated prices such as for networks where these are separately specified. Networks remain largely fixed cost entities in developed economies where demand has not been growing. For electricity customers, the value of the electricity network is as the provider of reliable electricity service – a value that is not directly related to the quantity of power delivered. Increasingly, as more and more customers generate their own electricity, the value of the network is evolving to become a platform to sell some of that power or other electricity services.

Moving towards a fixed charge would recognize the value of the network service for customers. It would also alleviate concerns that customers choosing to self-generate are not contributing sufficiently to the costs of using a network they still require.

Finally, demand-side policies should be designed in a way that minimizes both costs to consumers and their carbon footprint.

As renewables continue to grow and increasingly face curtailment, the optimal policy may no longer to be to encourage electricity conservation. Instead, demand side policies that encourage carbon conservation might be more efficient. 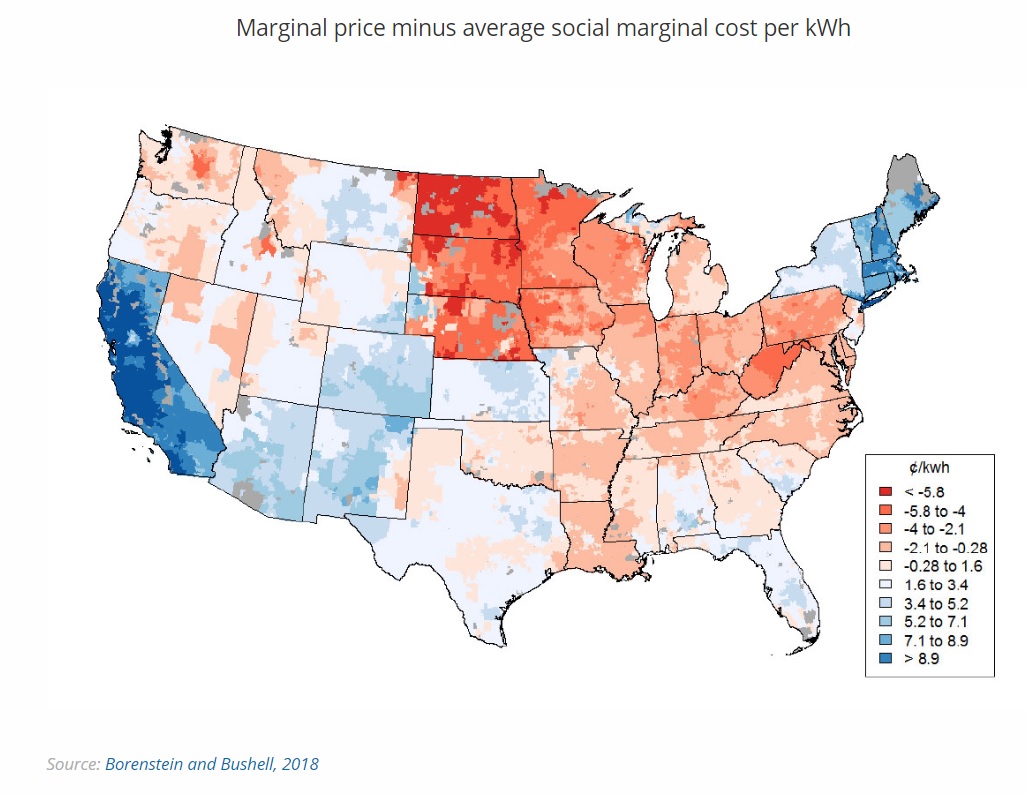 The figure above shows how the prices charged for consuming an additional kWh of electricity in each US jurisdiction is compared to the social marginal cost of producing that electricity. Red means the social cost of production exceeds the marginal cost, suggesting that marginal prices are too low and interventions such as conservation programs could be efficient. Conversely, in the deep blue regions, electricity prices are too high, suggesting that conservation and net metering programs need to be reconsidered.

Ultimately, when marginal prices for clean electricity consumption are adjusted downwards the viability of electrification increases – which can replace other end-uses of fossil fuels.

In fact, these changing circumstances are beginning to be recognized. The California energy regulator, the California Public Utilities Commission, has recently ruled that utility energy efficiency programs can include those that encourage customers to substitute electricity for fossil fuels.

More of a good thing
The good news is that the direction for electricity investments is positive, with the share of renewables likely to grow rapidly spurred by government policies and falling costs. Yet the resultant growth of wind and solar power will lead to new integration challenges for today’s power systems and these challenges will become greater over time.

Yet solving those challenges will also lead to economic opportunities in the energy system – opportunities to reduce costs, waste and emissions by making electricity available in substitution of fossil fuels.

Policies are central to realising these opportunities, by reforming electricity taxation, getting regulated prices right, and emphasizing carbon conservation above electricity conservation. The right price signals will encourage the innovation needed to advance the clean energy transition. And in the end, customers will have more of a “good thing”: greater access to cheaper, clean power.

0
previous Germany approves climate measures seen as weak by activists
next Case of Mahabal Auto Ancillary Pvt. Ltd. (Satara) for removal of difficulties in giving effect to the provisions of the MERC 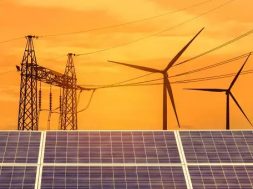