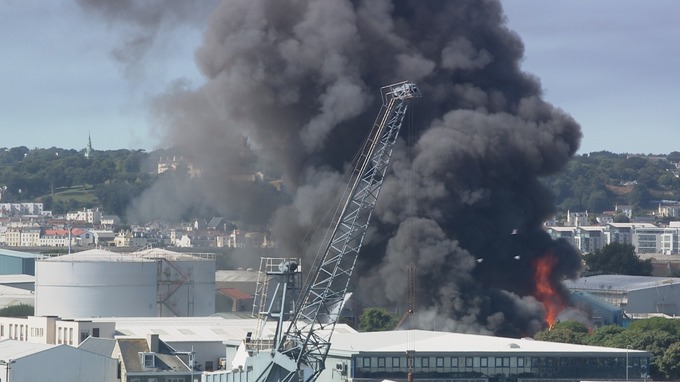 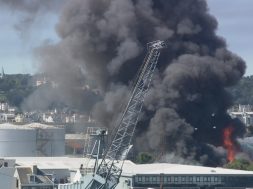 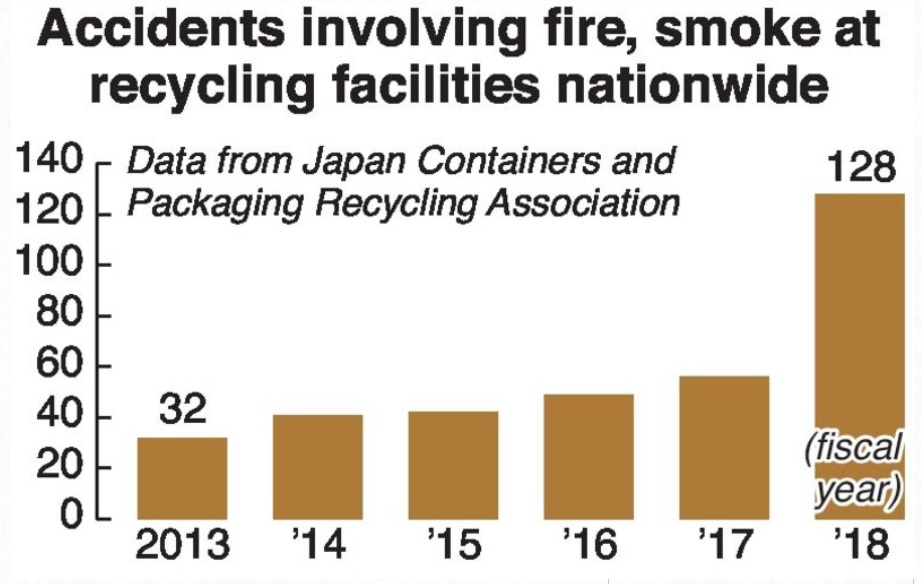 Incidents like this are causing an increasing amount of damage, with entire facilities sometimes burning down.

In most cases, the batteries were mistakenly thrown away by households or businesses along with regular garbage. The Environment Ministry has asked municipalities nationwide to ensure garbage is properly separated.

Lithium-ion batteries are lighter than regular rechargeable batteries, and last two to three times as long after being charged. According to the Tokyo-based Battery Association of Japan, 1.29 billion lithium-ion batteries were produced domestically in 2018, up from 760 million in 2003. Overall, they comprise 30 percent of all batteries produced.

Lithium-ion batteries in devices such as smartphones, computers and electronic cigarettes caught fire or emitted smoke 128 times at facilities that recycle plastic waste in fiscal 2018, according to the Tokyo-based Japan Containers and Packaging Recycling Association. This is four times the 32 incidents that occurred in fiscal 2013.

In April and May alone there were 60 incidents, the highest number so far.

In some cases entire facilities have burned down, resulting in businesses having to halt some operations. In addition to recycling facilities, incidents are occurring at all kinds of waste processing facilities, such as those that divide garbage into different types.

Lithium-ion batteries contain highly flammable organic solvents. If a battery short-circuits, it may catch fire. Most have protection circuits to prevent shorts, though some poor-quality products lack them. And even with a protection circuit, the impact of being crushed at a waste-processing facility can cause a battery to catch fire.

The Promotion of Effective Utilization of Resources Law requires manufacturers and importers of rechargeable batteries to collect them. Lithium-ion batteries must be thrown away in collection boxes that are found at major electronics retailers and city halls.

However, people are constantly throwing batteries away with their nonburnable or plastic garbage, which has led to incidents of fire and smoke not only at waste-processing facilities but in garbage trucks as well.

To address the situation, last month the ministry asked municipalities nationwide to call on waste-processing businesses to be thorough about separating garbage.

“We want everyone, households included, to use collection boxes when disposing of rechargeable batteries,” a ministry official in charge of the matter said.

There has also been a growing number of cases in which smartphones and other devices with lithium-ion batteries caught fire or emitted smoke while being carried by consumers.

There were 175 such incidents in fiscal 2017, or 2½ times the level in fiscal 2013, according to the Tokyo-based National Institute of Technology and Evaluation. Over those five years, one person died and 49 people were injured as a result.