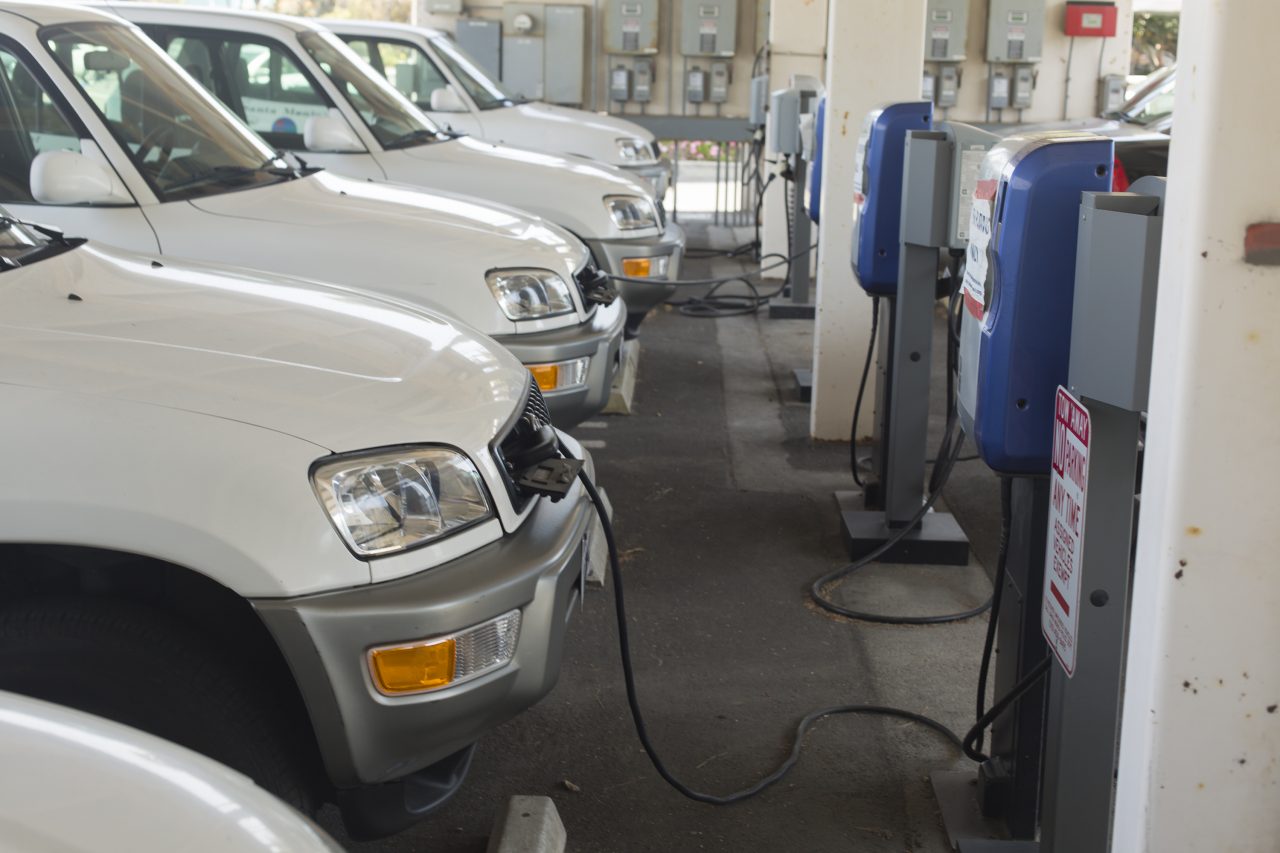 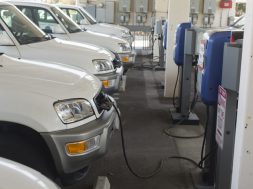 It is tempting to employ any number of puns when considering California’s transportation future:  The state is at a crossroads, its policies could run out of gas, dangerous curves lie ahead.

But keeping in mind that the state’s climate policies demand the wholesale electrification of transportation, here’s another: California must reinvent not only the wheel, but also the vehicle,

the fuel and the road. The transformation is well underway, but the positive news is clouded by negative trends.

More than half the nation’s clean cars reside in California garages and driveways, with sales making wild leaps—a nearly 81% increase in registration of new electric vehicles between 2017 and 2018, according to the California New Car Dealers Association. Yet planet-warming pollution from transportation has been rising, amounting to as much as half of the state’s greenhouse-gas emissions. Unless California can quickly reverse that trend, the ability to meet long-term climate goals is in doubt.

The nonpartisan Legislative Analyst’s Office concluded in a report released a few months ago: “The overall effects of the state’s policies aimed at reducing transportation (greenhouses gases) are largely unclear.”

Significant inroads have been made in nudging California toward its near-term goal of about 1 million electric cars by 2023. But there’s the added goal of 5 million zero-emission vehicles seven years later. It’s a glass-half-full calculation whether the 570,000 electric cars on the road today in California­–less than 3% of passenger vehicles—reflects a policy that’s off to a good start or one that is stalled at the gate.

The state’s stunning goal of electrifying all vehicles that move us and the goods we need—think of buses, trucking, rail freight, ships and airplanes—requires disruption of a sector whose last game-changing innovation was high-speed rail in the mid-1960s (one California struggles with even today).

Cleaning up transportation is a critical tool in California’s response to climate change. But Jared Blumenfeld, secretary of the state Environmental Protection Agency, said pollution from transportation is running counter to trends in most other sectors, at nearly half of greenhouse-gas emissions. That calculation includes energy used to extract and transport fossil fuels; the state Air Resources Board counts tailpipe emissions alone, about 40% of the entire emissions inventory.

While smokestack industries in the Golden State are retrofitting to comply with emissions caps, cars and trucks still run mostly on highly polluting 19th-century technology that, in addition to undermining climate goals, endangers public health with each tailpipe cloud.

California is addressing this discrepancy from a variety of angles, with more than 120 laws and incentives encouraging clean fuels and cars. The state has disbursed more than $854 million in rebates since 2010, funded by proceeds from cap-and-trade auctions, to help residents buy or lease clean cars. And it has spent hundreds of millions to subsidize new charging infrastructure; the Public Utilities Commission alone has approved the $738-million price tag for the state’s large utilities to install charging stations. And last year the state set an ambitious goal of installing 250,000 electric vehicle charging stations by 2025. There are about 20,000 public stations now, according to an air board spokesman.

State officials have been equally strict with their own departments. California is on its way to replacing half of the state’s light-duty vehicle fleet with non-gasoline cars, which must be accomplished by 2025. And the carbon content of fuel at gas pumps throughout the state, with the energy needed to produce the fuel, has been reduced by 3.5% since 2011.

The exemption electric-vehicle drivers had from paying a share of roadway maintenance via gasoline taxes was addressed in last year’s state gas-tax increase, which required an additional $100 annual registration fee for electric vehicles. And policies enacted in the past couple of years are intended to reduce miles traveled by encouraging multi-unit housing clustered around transportation hubs, though a highly controversial bill to further foster such moves has been held until next year.

Still, with emissions increasing, some officials are beginning to think of transportation as a laggard. 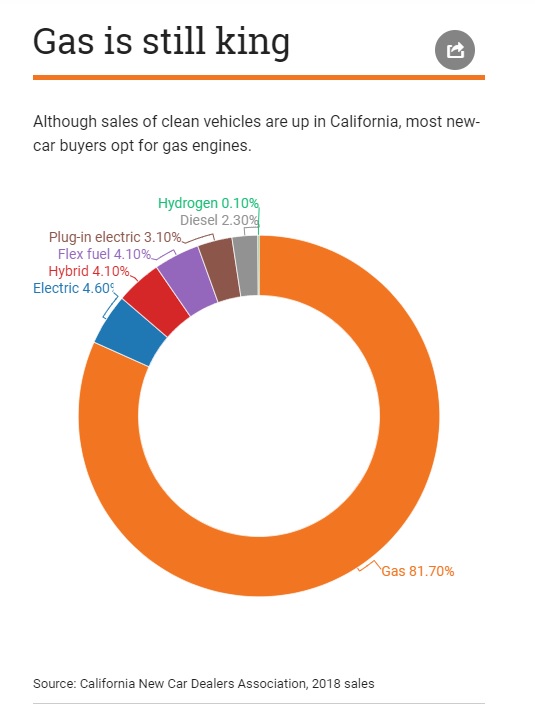 Dan Sperling, who sits on the Air Resources Board and is the founding director of the Institute of Transportation Studies at UC Davis, comes down squarely on the “we haven’t done enough” side of the equation. Although the most recent official emissions inventory ends at 2016, Sperling said trends continue to suggest that transportation emissions are increasing.

Yes, he said, California is on the verge of various breakthroughs, outlined in his book, “Three Revolutions.” The state’s metamorphosis, he said, will be propelled by electrification, driverless vehicles and widespread carpooling. But what California needs most is a good shove in the right direction from policymakers.

“The reality is that our (zero-emission-vehicle) mandate is not very aggressive at this point,” Sperling said. “The increase in electric vehicles has been significant, but if you pull out Tesla, there’s been almost no change. We are poised—we are making all the investments, we’ve got the policy structure, sort of, in place. But … something has to change. Maybe if costs keep coming down, it might be enough by itself. But it probably isn’t. The Trump administration is not helping.”

California requires that automakers sell clean cars to have access to the state’s car market, the nation’s largest. But those market signals are getting crossed: The Trump administration has announced plans to roll back California’s fuel-efficiency standards, which also serve as the federal rules.

The new standards are not yet finalized and will be met by a legal challenge from California. But any uncertainty about the trajectory governing cleaner cars is a setback, say electric-vehicle advocates.

“If we want clean air, we have to have clean cars, period,” said Phil Ting, a Democratic assemblyman from San Francisco whose evangelism about electric cars extends to his own plug-in Chevy Bolt. “From a regulatory point of view, we need to do more.”

Ting has twice sponsored legislation to phase out sales of new gas-powered cars by 2040. Twice the proposal sputtered.

Lew Fulton, a UC Davis transportation researcher, said that interest in electric vehicles has been “kind of stuck” for a variety of reasons. “Only about 15% of new car buyers say they would be willing to consider buying an electric vehicle, and that number hasn’t changed in three or four years,” he said.

Consumers tell researchers they don’t understand how electric cars operate and, critically, are confused about the status of state and federal incentive programs that bring down the cost, which ranges from $25,000 for a subcompact Smart car to $90,00 or more for an uber-luxe Tesla. The only hybrid vehicles eligible for rebates are plug-in electrics.

California’s rebate program “is a victim of its own success,” said Rocky Rushing, a lobbyist for the Coalition for Clean Air, a statewide group that advocates for policies to improve air quality. Applications for rebates rose 50% in 2018 over the previous year and are regularly oversubscribed, producing waiting lists.

Rushing said many low-income families would love to purchase electric vehicles, which are cheaper to operate, but they have little information on how to navigate the state bureaucracy. About half the rebate funds are earmarked for low- to moderate-income buyers, particularly in the San Joaquin Valley, where the state has aimed related programs such as Clean Cars 4 All, which buys back older, more polluting cars and replaces them with hybrids or electrics.

“We are not selling a lot of new cars to poor people,” said Gil Tal, who studies travel behavior at the UC Davis transportation think tank.

On top of that, the rebates don’t apply to high-income households, which still represent most of the state’s clean-car buyers. Those early adopters, who may keep the new cars for only a couple of years, are critical to salting the used electric-car market for middle- and lower-income buyers, who are offered separate incentives to purchase used clean cars.

Officials established an income eligibility cap in 2014 for the rebate system, with the rationale that wealthy people shouldn’t get discounts for buying cars. That cap was originally set at $250,000 in annual income for a single tax filer. In 2016, it was lowered to $150,000.

It’s difficult to fault the policy’s logic, experts say, but it may staunch the flow of cheaper second-hand vehicles to customers who can’t afford new models. That secondary market remains small, and many clean cars coming off leases are shipped out of state, where they can command higher prices.

Nearly half of California households have not purchased a new car in the last seven years, Tal said. “We should not punish the repeat buyers; we need these guys to buy a lot of cars.”

Cities and counties have developed their own goals and incentive programs, including a concerted effort to expand the state’s network of charging stations, especially in low-income areas. Los Angeles Mayor Eric Garcetti recently announced a goal of 25% zero-emission vehicles in the city by 2025 and 100% by 2050.

Utilities are also getting into the act. Caroline Choi, Southern California Edison’s senior vice president of corporate affairs, said the company has installed 1,000 charging stations for passenger cars and next year will begin work to add 48,000 more stations throughout Southern California. 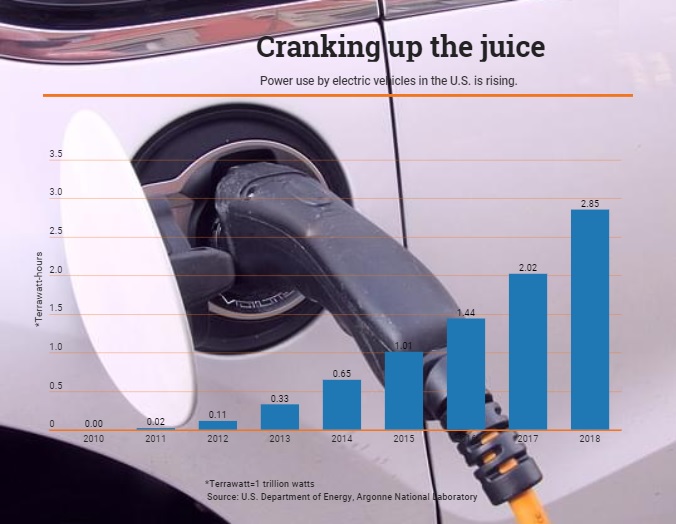 Customers now have nearly 50 electric models to choose from, and automakers are cranking out clean versions of the types of vehicles Americans currently want—SUVs and pickup trucks. But the batteries these vehicles carry may demand more electricity than the grid may have to sell, depending on what time of day consumers charge their cars. Power consumption from electric vehicles in the United States has nearly doubled in the last two years, a thirst that will only grow.

Another word about batteries: Lofty expectations could be cruelly dashed. Clean vehicles may not be powered by fossil fuel, but they also may not be as green as we would like. Critics point out that some of the minerals in the current generation of lithium-ion batteries are pulled from the ground in undemocratic and often authoritarian countries. Sometimes by child labor.

Or, as with a proposed lithium site near Death Valley National Park, mining holds the potential to mar a protected landscape.

Tesla executives recently predicted an international shortage of battery minerals, including nickel, cobalt and copper, prompting concerns about the cost of batteries just as electric vehicles are in greater worldwide demand.

And when they reach the end of their lives, batteries can be nasty, leaky things that make safe disposal a challenge. It is difficult to remove costly lithium when batteries are recycled, for example, necessitating more mining and problematic disposal, some environmentalists say.

Sperling said the clear and sustained policies from Sacramento that can remove technological hurdles are missing. The Legislature has bills pending that would fund more charging stations and study how to eventually eliminate diesel fuel, in addition to further encouraging housing near transit. But, Sperling said, they don’t fit together as a part of an overall strategy for achieving broader climate goals.

But right now, “we don’t have any compelling, high-profile initiatives that are transparently obvious,” he said. “It’s a problem.”