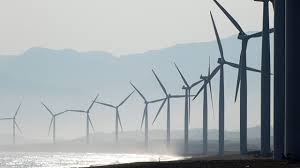 Electricite de France SA and its Canadian and German partners have finalized the funding of a 2-billion euro ($2.23 billion) offshore wind project, allowing construction to start in the English Channel.

EDF, Enbridge Inc. and Wpd AG plan to commission the 500-megawatt wind farm in 2023, the companies said in a statement Tuesday. The facility near the Fecamp harbor in Normandy will use 71 turbines made by Siemens Gamesa Renewable Energy SA.

France is lagging behind countries such as the U.K., Germany and Denmark in offshore wind as projects have been delayed by legal proceedings from opponents, which have criticized their costs and environmental impact. The government, which wants to reduce the country’s dependence on aging nuclear plants to make room for renewable energies, decided to accelerate offshore wind farm tenders as as construction prices have slumped.

“These large-scale projects fit with EDF’s strategy, under which it aims to double its renewable energy capacity worldwide between 2015 and 2030 to 50 gigawatt net,” EDF Renewables Chief Executive Officer Bruno Bensasson said in the statement.

EDF and Enbridge each own 35% of the project, and Wpd holds the rest. The power generated by the Fecamp wind farm will provide enough annual electricity to meet the power needs for 770,000 people, according to the statement. It will benefit from a 20-year power purchase agreement granted by the French government.

Lenders including the European Investment Bank, BNP Paribas SA, Credit Agricole SA and Societe Generale SA will finance about 80% of the project, Eric Le Bousse, the head of marine energies in France at EDF Renewables, said in a conference call Tuesday.

EDF and Enbridge started building France’s first offshore wind farm near Saint-Nazaire on the Atlantic coast last year, and they are working with Wpd on the financing of a third in the Channel near Courseulles-sur-Mer. All three were awarded in a government tender in 2012.

The final investment decision for the Courseulles project is expected at the end of the year or early 2021, with the aim to commission the 448-megawatt project in 2024, Le Bousse said.

A 25-megawatt pilot project using a floating turbine in the Mediterranean may be completed in 2022, while the 600-megawatt project near Dunkirk awarded last year to EDF, Enbridge and Innogy SE is due to be completed around 2027.

While the Fecamp wind farm will sell electricity at 140 euros to 150 euros per megawatt-hour, the Dunkirk project will generate power at 64 euros per megawatt-hour when including the cost of the substation and of the connection to the grid, Bensasson said. That’s because it will be equipped with much bigger turbines, he said.

Elsewhere in Europe, EDF is building a large wind farm off Scotland, and recently took a stake in a development in a giant project off the east coast of Ireland. It should compete in an Irish tender next year, Bensasson said.

EDF, which also bought a stake in 502 megawatts of offshore wind farms in operation and in construction in China this year, is considering further offshore endeavors there as well as in Taiwan, Japan, India, and the U.S., Bensasson added.