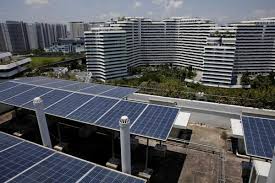 The Egyptian Electricity Utility and Consumer Protection Regulatory Agency (EgyptERA) has announced a nationwide merger fee of between 10 piasters-40 piasters per kW/h will be applied on solar power stations.

The decision has been met with extensive resistance among Egypt’s 280 companies qualified to implement such stations.

The merger fee will be imposed on companies who install solar power cells with a net metering system at housing units or factories. The system will see subscribers installing a solar cell, who will then come to an agreement with their electricity distribution company to purchase energy.

Whilst the electricity produced from these solar energy units will primarily go to the customer’s consumption, the remaining amount that is not used by the consumer will be pumped into the national grid.

EgyptERA has issued Circular No 2 of 2020, requiring all producers to pay for the merger, which will see solar cell produced energy linked up to the national electricity grid. The decision has raised many questions, and much dissatisfaction, about its application, especially since the customer will still be expected to pay for their solar energy units to be linked up to the national grid.

This is despite the consumer undertaking the financial investment to install the units at their own expense. Companies have also voiced their discontent, as they note that customers will be consuming energy produced by their own units, rather than that produced by the national electricity grid.

The solar energy companies’ dissatisfaction with the decision comes particularly as the savings the customers will achieve from the installation and use of solar energy will in part be paid to EgyptERA.

Companies have noted that the decision is unattractive to consumers, as EgyptERA will have little to no role to play in the customer’s solar energy production and consumption. They also fear that the decision will increase the cost during recovery period after the decision’s implementation.

Wael Al-Nashar, President of Onera Systems, said that the regulatory rules for the net metering mechanism must be separated from other mechanisms. This is particularly relating to the system for buying and selling energy through a third party or the same developer or qualified company, and the net metering system for exchanging the energy produced from solar power stations with the same beneficiary.

“We support that the location of the station project that is contracted by the net metering system be within the boundaries of the customer’s property, provided that the term ‘headquarters boundaries’ be interpreted,” Al-Nashar said, “Otherwise, it is subject to other systems and mechanisms, and we agree that the client contracting with the net metering system is not authorised to distribute electricity for the same project. Apart from that, it is subject to other regulations and mechanisms.”

According to the then Prime Minister’s decision for the year 2014, the maximum total contractual capacity stands at about 300 MW for projects with capacities of less than 500 kW, and 2,000 MW for larger projects from 20 to 50 MW.

EgyptERA may determine the appropriate share for capacities greater than 500 kW and up to 20 MW. The opportunity for the largest number of net metering system installers from developers will be less than or equal to 500 kW and in compliance with the law.

It has been suggested that the values of additional studies by the distribution company, which are required in the case of interconnection on the medium voltage network, be determined in relation to the stations’ capabilities. This would also take into account the list of the consulting offices accredited by the distribution companies for transparency and ease of procedures.

Al-Nashar emphasised that the net metering system has been put in place to encourage small producers and consumers, especially in the domestic, commercial, and industrial system to diversify the contracted energy sources. This would ensure that the feasibility study of projects is linked to the tariff.

The increased focus on diversifying energy sources is linked to the state’s commitment to purchasing energy produced from small customers and implementing those contracts. The increasing demand for energy that Egypt is experiencing will ensure that the current surplus of energy produced nationwide will not go to waste.

There has also been a high rate of development in energy production sources across Egypt, particularly related to industrial development and inter-state interconnection initiatives.

Salah Ibrahim, a member of the Al-Arabi Consultants and agent of Chinese solar cell supplier SunTech, said that the decision to impose a 2% tax on solar energy equipment will affect the cost of projects. With the merger fees added on top of this, importers will face added burdens, especially since the companies were tax exempt.

He called for a review of the decisions, especially relating to the merger fees, as these are likely to limit the establishment of small solar power stations. This may have serious consequences on the government’s current and ongoing plans to increase the percentage of participation provided by clean and renewable energy sources in the national grid.

Triple M Company President Hatem Al-Roumi also called for a review of these decisions, due to the potentially serious impacts they might have on the renewable energy sector in Egypt.

He emphasised that there should be an understanding of government decisions, whilst also understanding the impacts of these same decisions on the solar energy industry. He added that the cost of solar power stations would rise, which would result in a general retreat from installing the stations.