KERC Directs to Reduce Tariff of Rs.4.36 per unit for the Energy Supplied

Attending the second One Planet Summit in New York City, the European Investment Bank (EIB), the EU Bank, is announcing progress on initiatives hailed as “transformative” that will deliver on the ambitious Paris Agreement to tackle climate change.

Global Urbis is a groundbreaking partnership to enhance climate action in cities around the world. The Land Degradation Neutrality Fund is a unique way to finance climate adaptation and land restoration measures through projects that will benefit some of the most vulnerable communities. In addition, the EIB President underlined how the EU Bank is actively engaged with 29 other public development banks to align with the Paris Agreement in a coordinated approach. He also pointed to the EU bank’s commitment to backing the International Solar Alliance to support solar energy and the exchange of technology. Finally, he highlighted the first Sustainability Awareness Bonds recently launched by the EIB to help achieve the Sustainable Development Goals.

Speaking from New York, EIB President Werner Hoyer said: “Multilateral cooperation is the only way to achieve success in tackling climate change and sustainable development. We are here to demonstrate that multilateralism works and that we will do all we can to defend it. International cooperation has assured peace and brought prosperity wherever it has been allowed to flourish. We must cherish it and protect it vigorously, and we will.”

“Multilateral financial institutions like the EIB have a vital role to play to help channel private capital towards the energy transition and sustainability objectives that are needed to reach the Paris Agreement and the Sustainable Development Goals. Crucially all the initiatives that the EIB is reporting on at the One Planet Summit have been developed and implemented with partners, because no one can tackle the climate challenge alone. This is the case for the Global Urbis, the Land Degradation Neutrality Fund and the International Solar Alliance. As the EU Bank, together with our public development bank partners, we also committed to report on our alignment with the Paris Agreement and I am confident that for our part all the EIB’s activities will be fully aligned by 2020”, President Hoyer said.

He added: “Investing in innovation is also crucial to accelerate progress in tackling climate change. For example, the price of renewable energy has fallen considerably in recent years – but not enough. More resources and efforts must go into research and development work around renewables, to ensure that their cost drops even more and that they become the source of energy of choice for the development and industrial growth of every country.”

Together with the European Commission, other financial institutions such as EBRD, and the Global Covenant of Mayors (GCoM), the EIB launched Global Urbis, a set of breakthrough partnerships to bridge the urban financing gap. The partners committed to develop advisory services, financing instruments and broader initiatives to foster climate action investment in cities and local authorities with the scale and speed needed to deliver on the Paris Agreement.

During the recent Global Climate Action Summit in San Francisco, as part of the new partnership under the umbrella of Global Urbis, the EIB and the Global Covenant of Mayors for Climate and Energy (GCoM) launched the Global Climate City Challenge. The initiative aims to help prepare and finance urban climate action projects to build greener, low carbon and more climate resilient cities for future generations. The EIB and GCoM are looking for bold and ambitious projects that will make a substantial difference for citizens as well as for the planet itself.

FELICITY, a technical assistance programme for low-carbon infrastructure projects in cities jointly led with the German Corporation for International Cooperation (GIZ) will also contribute to the Challenge. The German Federal Ministry of the Environment (BMU) envisages expanding FELICITY, which will contribute to Global Urbis and the respective partnership between GCoM and the EIB.

During the last 7 years (2011-2017), the EIB has lent about EUR 150 billion for urban development, defined in terms of the priorities of the EU urban agenda, lending to well over 1000 cities and towns worldwide. Out of the total investment in urban development, over EUR 44 billion were invested in climate action.

The EIB participates in the first-of-its-kind Land Degradation Neutrality Fund (LDNF), launched last year at the One Planet Summit as a transformative contribution to the Global fight against climate change. The EIB has committed to provide USD 50 million to the fund, which aims to reach USD 300 million investment in land management and land restoration projects worldwide to achieve the Sustainable Development Goals’ land degradation neutrality by 2030.

The Fund is sponsored by the Global Mechanism of the United Nations Convention to Combat Desertification (UNCCD) and managed by the firm Mirova (Natixis).

Nine months after its launch, the initiative is ready to be implemented and the Fund is now in a position to close and become operational in the coming weeks.

This was made possible through innovate risk mitigation feature to catalyse private finance for investments in land restoration projects in Latin America and the Caribbean. This includes funding from the Luxembourg-EIB Climate Finance platform, Agence Française de Développement, Natixis and the Total Foundation, as well as guarantee from IDB Invest.

In addition to the European Investment Bank and Agence Française de Développement acting as anchor investors, other public and private investors have confirmed their investments: Fondaction, BNP Paribas Cardif, Garance, Fondation de France, and Natixis. Corresponding commitments amount to up to USD 100 million.

“The cost and number of climate related disasters are rising and accelerating land degradation, putting pressure on affected communities. With more than 1.3 billion people living on degraded land, the potential for forced mass migration and internal displacement is high. No single government has sufficient resources to finance climate adaptation and land recovery actions. Therefore, to achieve the Sustainable Development Goals target of a land degradation neutral world by 2030, large amounts of financial resources must be mobilised. For this reason, the EIB is supporting the Land Degradation Neutrality Fund (LDNF) to invest in projects that will speed up active involvement and concrete actions to reach land degradation neutrality. I am pleased to say that less than one year after its launch, the LDNF managed to mobilise private and institutional investors and to establish a pipeline of concrete projects that will make a change in the years to come.”, said EIB Vice-President Ambroise Fayolle.

The 2015 Paris Agreement is about aligning country strategies and financial flows with ambitious climate action goals. Following up on their joint statement released at the 2017 One Planet Summit, the Multilateral Development Banks (MDBs) and the International Development Finance Club (IDFC) are working towards aligning their activities.

EIB’s Climate Strategy and Action Plans – the strategic framework of our climate action – are in line with the principles of the Paris Agreement. By 2020, when the implementation of our Climate Strategy is completed, EIB activities will be Paris-aligned.

The EIB is partnering with the International Solar Alliance, bringing its expertise and financing to support the expansion of solar energy in India and other regions where solar power is one of the most abundant renewable energy sources but where technologies, funding and expertise are often lacking. The goal of the International Solar Alliance (ISA) is to raise USD 1 trillion by 2030 from public and private investors to invest in such solar projects.

In 2017, EIB provided EUR 1.05 billion of new financing for solar energy projects around the world, representing the largest ever annual support by the EIB to the solar sector, and is currently finalising a new EUR 200 million credit line to provide additional financing for renewable energy projects across India. Over the last 5 years, the EU Bank provided more than EUR 21 billion for renewable energy investment worldwide, including EUR 2.5 billion in photovoltaic and concentrated solar power projects.

Earlier this month, the EIB issued its first Sustainability Awareness Bond. The EUR 500 million transaction represents the first EIB funding intended to directly support sustainable finance beyond climate and builds on the EIB’s pioneering role unlocking investment through green bonds. With this new product, the Bank extends its established allocation and reporting practice to enhance capital market transparency and accountability in further areas of environmental and social sustainability. It will contribute to strengthen investor support for transformational sustainable investment, essential to achieving Sustainable Development Goals and improving people’s daily lives. Initially, the Sustainability Awareness Bonds will focus on investment in water supply, sanitation and flood protection and are expected to expand to other sectors such as health and education once detailed reporting frameworks are in place. 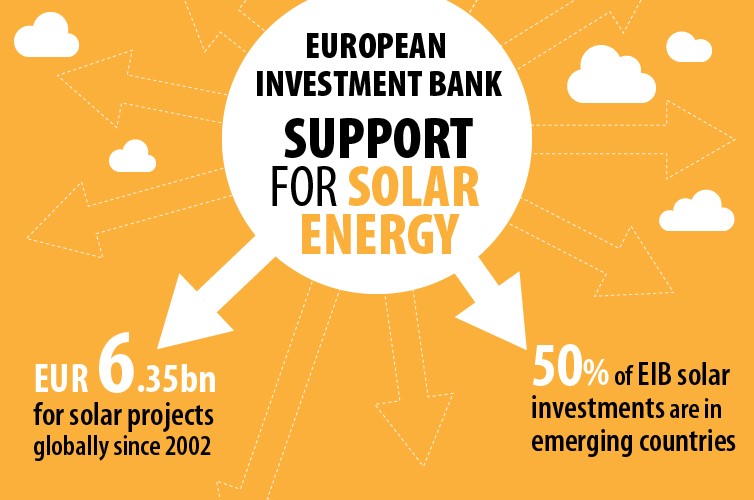 The European Investment Bank (EIB) is the long-term lending institution of the European Union and is owned by the EU Member States. It makes long-term finance available for sound investment in order to contribute towards EU policy goals both in Europe and beyond. The European Investment Bank is active in around 160 countries. It is the world’s largest financier of climate-related investment with USD 100 billion committed for climate action in the 5 years up to 2020 in support of the Paris Agreement. http://www.eib.org/projects/priorities/climate-and-environment/climate-action/index.htm

About the One Planet Summit

The second edition of the One Planet Summit is co-hosted by President of France, Emmanuel Macron, Secretary-General of the United Nations, António Guterres, President of the World Bank Group, Jim Yong Kim, and UN Special Envoy for Climate Action, Michael R. Bloomberg. It brings together heads of State, high-level institutional decision-makers, business leaders, and other non-state actors, to account for the implementation of their commitments made at the first One Planet Summit in December 2017 and build collaboration for ongoing multilateral climate action.