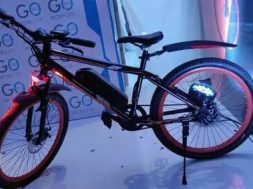 The Modi government has been defending the multi-tiered rates under GST, saying there cannot be one rate given that different segments of society have to be taxed differently, but it has emerged that ordinary bicycles used mostly by the lowincome group people attract 12 per cent GST while expensive electric bicycles are in the lowest slab of 5 per cent.

In reply to a question on the issue, Minister of State for Finance Anurag Thakur recently had said in the recently concluded winter session of Rajya Sabha that currently there was no proposal to shift ordinary bicycles to lower GST slab of 5 per cent.

A tax expert said that electric bicycles are anyway competing with scooters and hence there is a need to give better rates for electric bicycles. Further, the electric vehicles are very few in numbers and if the government wants to go green, certain tax benefits and incentives are required.

As per industry estimate, transportation accounts for about 24 per cent of India’s carbon emissions and remains a major source of air pollution. In the wake of this, the government has been promoting the use of electric vehicles.

“Comparing electric bicycles with ordinary bicycles is not right. On an average, normal bicycles would be doing 2-3 kilometres a day while electric bicycles run much more,” said the tax expert quoted above wishing not to be named as the issue was political.

He cited the example of solar products which are under the lower GST slab of 5 per cent, but it is not bought by the poor.

“If you argue on this line, the debate would go to a different tangent altogether,” he added

Another expert said the higher GST rate for ordinary bicycles is an anomaly after two and a half years of GST roll-out. In addition to this, he pointed out that duty on raw materials going into making finished products should be lower than the duty on finished products.

Terming it the case of inverted duty structure he said that iron rod which is used for producing bicycles still attracts higher GST. Vishal Raheja, deputy general manager (DGM), Taxmann said that GST on ordinary bicycles should certainly be lower. “If not lower then it should be at least comparable with the electric bicycles,” Raheja said.

Pankaj M. Munjal, Chairman and Managing Director, HMC, a Hero Motors Company said that lower 5 per cent GST would provide relief to those households where at present expenditure on bicycles accounts for a large share of the household income.

“We understand that potential adverse impact on government revenue is becoming a constraint (for GST rate cut). But we feel, increased sales should take care of that, even if we assume a shortfall in revenue, a resolution can be found if we approach this issue keeping the interest of those under privileged buyers in mind,” Munjal said.