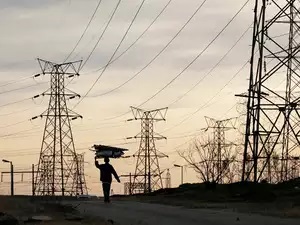 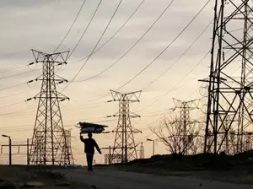 It wants to ensure that renewable energy tariffs are not changed after execution of contracts, and electricity regulatory commissions have more teeth to enforce power purchase agreements between projects and distribution companies (discom)
By ..

New Delhi:The government is planning to introduce a bill to amend the Electricity Act to prevent states from reneging on power pacts, particularly renewable energy contracts, and distribution companies from defaulting on bills.

It wants to ensure that renewable energy tariffs are not changed after execution of contracts, and electricity regulatory commissions have more teeth to enforce power purchase agreements between projects and distribution companies (discom), a senior government official said.

Power minister RK Singh and top officials of his ministries have been asking Andhra Pradesh to refrain from renegotiating renewable power pacts to avoid sending wrong signals to domestic and global investors.

Earlier, the power ministry was considering promulgating an ordinance as discom dues to power generating companies have swelled to `82,000 crore. The bill is likely to be introduced in the later part of the budget session once cleared by the Union Cabinet. The budget session of the Parliament will be held in two phases—from January 31 to February 11and March 2 to April 3. 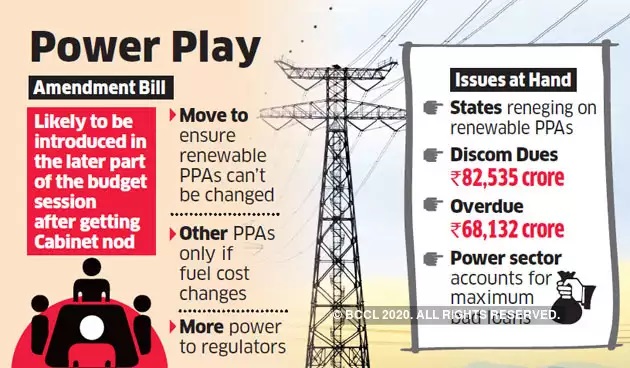 “An ordinance was being considered earlier as liquidating outstanding dues of discoms is a pressing issue. The power ministry’s earlier initiative of mandating discoms to open letters of credit has worked and there are no fresh dues. But the accumulated dues have to be settled to ensure viability of power producers and the sector,” the official said.

The amendments propose to give more teeth to the electricity regulatory commissions to ensure enforcement of power purchase agreements between power plants and distribution companies. It is proposed to alter the relevant sections of the legislation to ensure that parties to the contracts do not stop supplying or offtaking electricity even in case of a dispute, till the time it is settled, he said.

ET on Wednesday reported that the government plans a grant of over `1.1 lakh crore to state discoms under a new bailout scheme that would mandate those with high losses to either privatise operations or appoint distribution franchisees and invest in infrastructure upgradation.

The Centre also proposes to address delays in tariff adoption by state and central electricity regulators. If concerned regulators do not adopt tariffs in two months, the power producers or the distribution companies will have the right to appeal to the Appellate Tribunal for Electricity.

Proposal to set up a separate dispute resolution court to resolve issues between discoms and power generating companies in a time-bound manner is also being considered. The court, with powers similar to the Appellate Tribunal for Electricity, is proposed to have an independent member from the private sector besides a chairperson and a technical member.