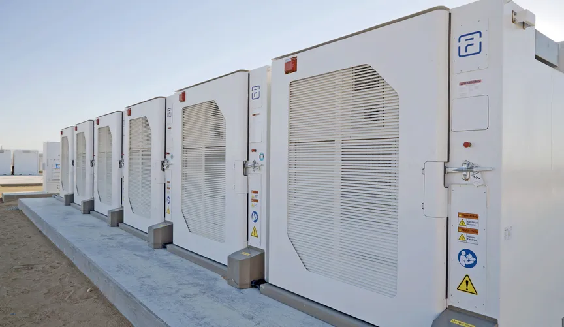 A dedicated grid-storage tax credit could unleash a new wave of development for technologies critical to meeting U.S. climate goals.

The relatively young energy-storage industry will get a proper seat at the clean energy policy table if the Democrats’ latest climate bill becomes law.

The U.S. conducts federal clean energy policy through tax credits, for better or worse. Wind and solar won dedicated tax credits years ago and rode them to the top of the charts, becoming the two largest sources of new power plant capacity in 2021. But the technologies to store that renewable electricity have had to scrape by without their own tax credit. The best that storage plants could do was piggyback on solar projects in order to get a tax credit.

That’s not so bad for residential installations, where the primary reason for installing a battery is to store rooftop solar production. But massive utility-scale battery plants can do a lot of good in locations where solar installations are impossible or inadvisable, like densely packed population centers or strategically situated substations. Building more storage capacity makes the grid better at absorbing large amounts of renewable generation.

If the Inflation Reduction Act passes, then energy-storage projects will be able to benefit from federal support without needing to be located at the exact same spot as a solar farm. The bill as currently drafted includes a standalone investment tax credit (ITC) specifically for energy-storage projects, which would support all sorts of storage technologies.

“This is going to create a much fairer situation on the grid and really increase the speed at which we can deploy storage nationwide,” U.S. Senator Martin Heinrich (D-New Mexico) told Canary Media this week. ​“You’re going to see [storage] fill a lot of gaps where, because of this ITC, it ends up popping to the top of the solution set.”

Heinrich first introduced a standalone storage tax credit in 2016, to fill a critical gap in grid decarbonization efforts. As more renewables hit the grid, storage becomes more valuable for smoothing the ups and downs of clean energy production. But storage only gets built when developers believe they can make money from it, or when utilities determine it will cost-effectively meet their needs for the grid. Because of both the cost of deploying new technology and the power industry’s deeply rooted sense of caution, the storage buildout has lagged the renewables boom.

It didn’t have to take this long. Advocates have been pushing for this kind of standalone tax credit ​“since storage was a science project,” said Katherine Hamilton, chair at clean energy policy shop 38 North Solutions. Hamilton has worked on this issue long enough to remember Oregon Senator Ron Wyden (D) proposing a storage credit back in 2009.

Still, even without a dedicated tax incentive, the scrappy storage industry pushed its way onto the power grid, and now is ​“one of the fastest growing segments in the clean energy sector,” said Heather Zichal, CEO of industry group American Clean Power. The ITC stands to accelerate deployments even further. As Zichal told Canary Media last year, the standalone tax credit for storage has been one of her group’s top legislative priorities.

The storage analysts at research firm Wood Mackenzie believe that, without the tax credits in the current bill or the earlier Build Back Better legislation, the U.S. would install 100 gigawatts of grid-scale storage in the 10 years starting with 2022. (For comparison, the U.S. Energy Information Administration projected in January that the U.S. would install 5.1 GW of utility-scale batteries this year.)

If the new climate deal becomes law, that 10-year outlook increases to a base case of 122 GW, said Dan Shreve, global head of energy storage at consultancy Wood Mackenzie. If conditions break even more favorably for the storage industry, deployments could approach the bullish case of 135 GW.

“If you look at where we were about to go two weeks ago, it’s a completely different animal,” Shreve said.

The proposed storage ITC would chop 30 percent off the cost of a storage project. But to qualify, projects would need to meet labor standards for prevailing wages and apprenticeship. That’s an important protection for the energy workforce as it stares down historic shifts in how electricity is produced.

“There’s the potential to really stack benefits on the incentive side,” Heinrich said.

Exactly how storage developers would be able to make use of those adders remains to be seen.

What is clear is that this policy would not be just for lithium-ion batteries, which have been the near-exclusive choice for grid storage technology in recent years. The ITC would be open to anything that stores energy, Hamilton noted, including older forms like pumped hydro, and new and emerging technologies for cost-effectively storing and discharging power over many hours.

“You’ll get a lot more scale on some of those other long-duration technologies because of this,” Hamilton said.

The ITC would also cover thermal storage, a well-established technology that reduces energy needs for heating and cooling at crucial hours.

Prior to this legislation, renewable tax credits have followed a boom-and-bust cycle: They spurred installations for a few years, then were supposed to sunset, at which point the industry rallied its lobbying forces to win an extension for a few more years. The IRA would establish decade-long tax credits for storage and the other forms of clean energy — a kind of certainty the industry has never had from the tax code.

“This bill sends the market signals: Energy storage is here to stay, and feel free to invest, because these aren’t going away for 10 years,” Hamilton said.

Storage projects on the edge would become profitable

The modern energy-storage industry became viable over the last decade as lithium-ion battery costs came down and revenue-making opportunities started to appear. But the battery price tag still deters grid battery construction outside a few geographic enclaves. That’s where the storage ITC can help, by reducing the capital cost of projects significantly.

That could get private developers off the fence in competitive markets. That’s where the storage boom started — with privately developed projects delivering the lightning-fast service known as frequency regulation in the mid-Atlantic PJM market. But that market quickly got saturated. Since then, large-scale batteries have tended to get built when they have utility contracts to guarantee some revenue. A few pioneering firms have gone it alone, building merchant storage plants in California and Texas, and developing them in New England. But they’re the outliers.

If investment costs for a power plant suddenly dropped 30 percent, potentially up to 50 percent, that would make it much easier for a project to pay itself off. Merchant markets are still risky, and few companies have a track record of making money with merchant storage, but the ITC would shift the risk/​reward calculus in the right direction.

The other, much larger category of big batteries is utility-led. This includes projects built and owned by utilities, and projects built by independent developers to fulfill a utility contract. These projects have taken off in places where decarbonization policy pushes developers toward battery storage for new firm capacity — California and Hawaii, for instance. In other states, like Arizona and Colorado, utilities found the combination of solar and storage beat out other options on price.

In places where storage already pencils out, the ITC would mean federal taxpayers are buying down the cost of storage for local ratepayers. The project that was already a good deal would become a better deal. In the many parts of the country where utilities have yet to build battery storage at meaningful scale, the technology would become that much more competitive against other options.

“Because it’ll drive down cost and drive up scale, [the IRA] will make storage much more part of how planning is done from the utilities and [independent system operators],” Hamilton said. ​“It will open up states that did not have [storage] targets but can really use the services storage provides.”

And buyers who have been waiting to seal the deal until the long-simmering tax credits were finalized could finally move ahead.

“We’ve had utilities tell us that, ​‘We will not buy storage until the ITC passes,’” one storage developer told Canary Media.

For those concerned about decarbonization, the thing to watch is whether a storage ITC would mean that battery plants (charged from the grid, but benefiting from cheap renewable production) could beat out gas-burning plants for the role of peak power delivery.

Gas power-plant technology is not getting radically cheaper. And the fuel itself has gotten more expensive recently, with U.S. gas futures hitting their highest prices since 2008 this summer.

If the standalone storage tax credit passes, battery projects ​“are immediately put in a much better position in terms of your delivered cost of electricity versus a gas peaker,” Shreve said.