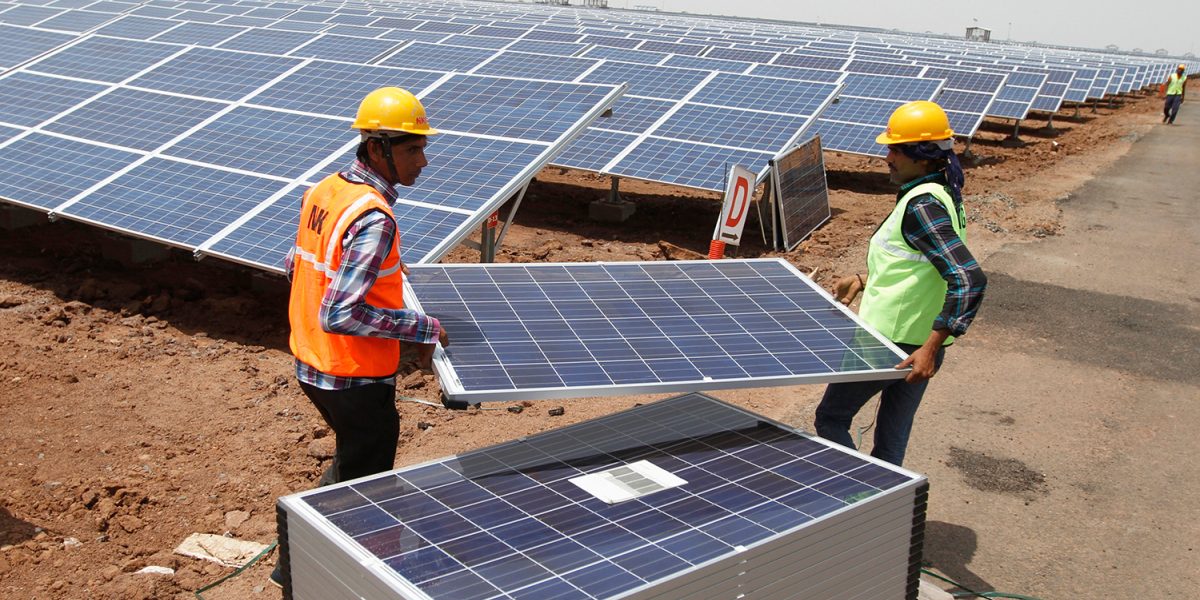 Even With Low Tariffs, Why Growth in India’s Solar Sector Is Slumping

Even With Low Tariffs, Why Growth in India’s Solar Sector Is Slumping

A rising number of firms are cutting costs and even exiting the market, even as investments into the sector are slowing.

At first glance, all seems well in India’s solar sector. Its tariffs continue to crash. At the Solar Energy Corporation of India (SECI)’s auction last November, Saudi Arabia’s Aljomaih Energy and Water Co and Green India Wind Energy, one of Sembcorp’s India investments, won after bidding 2 per unit. State-run NTPC wasn’t too far behind. It bid 2.01 per unit for the two bids, adding up to 600 megawatt (MW) of solar generation.

The auction underscored, once more, the sheer competitiveness of solar power. “Coal-based power costs between 4 to 5 a unit. Wind is at 3. Hydro and nuclear are much costlier,” said Vinay Rustagi, managing director of Bridge To India, a Gurgaon-based advisory firm focusing on India’s renewables sector.

It has been a quicksilver rise. “In 2012-13, if anyone had said solar tariffs would fall so low, people would have dismissed that as foolish talk,” a mid-level manager at NTPC told CarbonCopy on the condition of anonymity.

“Now, no one wants to set up thermal power plants. Only renewables are in. There is no viability for anything else.” And yet, look beneath these bids and you will find chaos and tumult.

Something new under the sun

“India will add no more than 6-8 GW of fresh solar capacity a year from now on,” said Santosh Khatelsal, the former managing director of Bangalore-based Enerparc Energy.

Among other things, this means India will miss Prime Minister Narendra Modi’s promise to push India’s solar capacity to 100 GW by 2022 – from around 37 GW today. As growth slows, a rising number of solar firms are cutting overheads, selling off parts of their business, even exiting the market.

Japanese investment giant SoftBank has sold SB Energy, its Indian renewables business with 4,954 MW in installed capacity, to Adani Green and announced its exit from the country. Renew Power is in talks with Amplus Power to sell its rooftop business as well.

These trends are intensifying. In 2020, M&A (mergers and acquisitions) transactions in the sector amounted to about $2 billion, a 75% jump from $1.2 billion in 2019. In terms of capacity, according to JMK Research, a consulting firm focusing on the renewable sector, no less than 5% of India’s solar capacity – 2 GW – has changed hands in the last one-and-a-half years alone.

Even in 2021, M&A activity continues to be strong. In the first five months of this year, India has seen at least nine deals.

A brief timeline of M&As in the solar sector 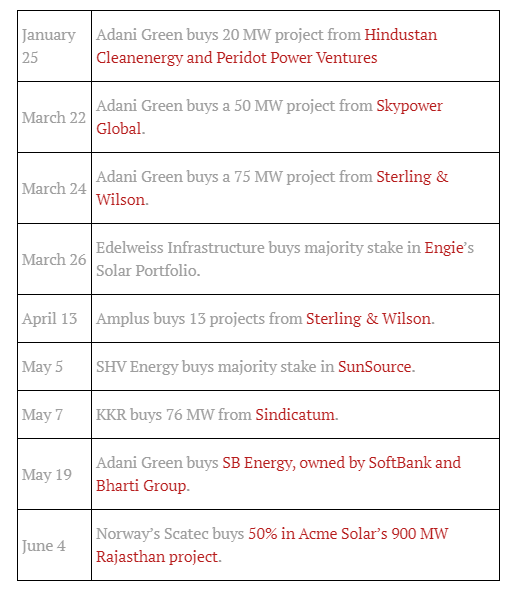 Similar processes are afoot in the engineering, procurement and construction (EPC) segment. This February, Mahindra Susten sold its EPC business along with 1,200 MW of solar assets to Canada’s Brookfield Asset Management.

A clutch of hypotheses seek to explain why the sector is slipping. The high cost of rural land has pushed up project costs. So has a rise in module prices and shipping and freight charges.

The slowdown in the economy – exacerbated by COVID-19 – and the government’s response to it, has depressed demand. The rooftop sector has slipped into crisis as DISCOMs, wary of losing their most profitable customers, push back.

DISCOMs, badly cash-strapped, have also delayed payments and fresh PPAs (stranding about 17-18 GW worth of projects), pushing developers into their own cash-flow crisis.

At the same time, falling tariffs have put margins under additional pressure. That is one reason why SoftBank decided to exit. It wanted higher returns. (As developers go slow on fresh projects, EPC firms have found their project pipelines dry up.)

In tandem, the industry is seeing the entry of newer players with access to cheaper money. This includes global pension and sovereign funds, a handful of Indian business groups and fossil fuel energy majors trying to create a renewables business.

Unable to compete with them, older firms are trying to reduce costs, restructure operations or just leave. There is truth in all these explanations. And yet, as CarbonCopy found while working on this series, they do not capture the complete story.

They do not explain why, for instance, unlike EPC firms and developers, solar manufacturers in India are bullish on the sector. Private companies are racing to set up fresh manufacturing lines, as are public sector enterprises like BHEL and Coal India.

It adds up to a paradoxical moment. Developers and EPC firms are bearish. The solar manufacturers selling to them, however, are bullish. The immediate reason for that paradox: India’s push for solar manufacturing.

One fallout: Companies like Waaree Solar and Premier Energies see growth in import substitution. But even that explanation doesn’t fully clarify the puzzling drift in India’s solar sector.

Reasons behind the sector’s slow growth

In trying to understand why the sector is slowing, three spots of dissonance become clear.

1. The rooftop segment is slowing because DISCOMs are placing curbs on it. They run on cross-subsidisation, charging high rates from industrial and commercial users and providing cheaper (even free) power to poorer segments of India.

The introduction of rooftop solar, where large firms generate their own power, was bound to eat into their revenues. Why did the country amp up its targets for rooftop solar without preparing DISCOMs for this switch?

2. Take ground-based solar for instance. In the absence of rooftop solar, growth in solar installed capacity has to come from here. The sector, however, depends on tenders put out by state bodies like NTPC and SECI.

Effectively, their limited capacity to produce fresh tenders is a chokepoint for solar capacity addition in India. “Capital is far in excess of the opportunities,” a senior manager working on renewable investments from Macquarie’s London office told CarbonCopy. “Even if India were to double its number of solar tenders, there would be enough demand.”

3. SECI doesn’t check with DISCOMs before floating tenders. Instead, it shops around for buyers after conducting its bids. Whenever DISCOMs stay away – due to stretched finances or the hope for lower bids in the next round of auctions – power purchase agreement (PPAs) don’t get signed.

If the first of these is a case of poor planning, the other two betray poor market design. As this series will show, two global factors – the falling cost of capital and ever-cheaper solar equipment, largely due to China – have pushed solar tariffs down in India. What remained missing, however, was a roadmap for integrating solar into the country’s energy system. What we had were ad hoc measures.