There’s been plenty of discussion – most of it uninformed – about electric vehicles in the last few months. So, it was timely I went across to Spain to have a look at the way that country is starting to roll out its EV infrastructure. You might not think, on face value at least, that Australia has much in common with Spain, but Spain provides a solid case study for us here in Australia.

There are a few reasons for that, too. First, Spain is quite a decent-sized country geographically and it’s not uncommon for locals to drive reasonably long distances between large cities.

Second, Spain has a similarly dry and sunny climate to Australia, which would lend itself to large swathes of solar power generation.

Third, Spain’s built up cities like Madrid have similar levels of urbanisation to cities like Sydney and Melbourne.

Lastly, electric vehicle sales in Spain are starting from a relatively low base in percentage terms, and the initial take up has been slow – almost exactly like Australia.

With those points in mind, Nissan decided to showcase some of the work it had been doing in the lead up to a big football match you might have been aware of…

The 2019 Champions League final (Liverpool v Tottenham) was being hosted in Madrid, and with Nissan the naming rights sponsor, it was the perfect opportunity to showcase some of the charging infrastructure the Japanese company is promoting in an effort to encourage electric vehicle use in busy European cities.

Leading up to the final, Nissan revealed it would use a fleet of 363 electric Leaf hatches and e-NV200 vans to transport visitors and dignitaries to and from various events and sites around the city. In total, the mega fleet would cover nearly 250,000km of zero tailpipe emission kilometres – thus illustrating what a cleaner city might look like in the future.

“We are really pleased to be able to offer attendees the experience of zero emissions transportation on the streets of Madrid, a city that is already at the forefront of the electric vehicle revolution,” Gareth Dunsmore, divisional manager of Marketing Communications, Connected Car Services, Customer Experience at Nissan Europe told CarAdvice in Madrid.

The city of Madrid has pledged to switch to zero emissions vehicles by 2040 and 100 per cent renewable energy by 2050, so the 2019 electric vehicle showcase makes a lot of sense. It has also banned old diesel and petrol cars from some parts of the city centre as part of a move to reduce congestion and pollution. A new, low-emission zone covers 1166 acres and means that all petrol vehicles registered before 2000 and diesel vehicles registered before 2006 are banned form the area, unless they are used by residents of the area or meet other exemptions.

Additionally, only vehicles with zero emissions are permitted in downtown Madrid and the start of the roll out has begun with the city installing 110 electric charging points. Nissan has added a further 36 chargers for the duration of the Champions League build-up and final, with those chargers to be re-deployed around Spain once the event is over.

We experienced a charging station set up inside a conventional Repsol fuel station. It was over to the side, out of the way of the bowsers, and the station itself had the usual amenities, as well as two fast food outlets.

For me, that’s the key too. We are already preprogrammed to stop at service centres for fuel and rest stops, particularly on longer journeys, so there’s no new thinking required if you own an electric vehicle. It’s what we’ve always done when we head off on a road trip with friends or family.

The service station also has a captive audience for however long you’re charging up, with most people likely to buy a coffee, water, a snack or head into a food outlet for lunch. It’s a great way for them to justify the outlay to set up the charging facilities, by selling more product to people who stop to use it.

Makes you wonder why service stations here in Australia haven’t rushed to install charging infrastructure in a bid to attract electric vehicle owners. While overnight charging at home will take up the bulk of power input for smart electric vehicle owners, these stations will be vital for road trips, longer drives, or instances where you need a quick top up away from home base. And, while we don’t have an extensive network of them yet, if the roll out of electric vehicles continues apace, we’ll be seeing more and more of them pop up.

The charging process itself is really easy. You have an app on your smartphone with your charging account on it. All your details are in that app too. You simply tell the app where you are and it enables the charging station, then you plug your car in and pay for what you use. You can get reminders directly to your phone, so if you’re inside having lunch, you can come back and unplug your vehicle ready for the next person to charge up.

It’s a simple system and it works. It will require people being considerate enough to take their vehicle off charge after 40 minutes rather than leaving it parked there for four hours for example, but beyond that, it’s a ridiculously simple process and it works well too, as we saw in Madrid. The use of an app, as we know, is already a great way to remove cash from the transaction and make it easy for you to keep track of how much you’re spending and when.

While we weren’t in Madrid to test the Leaf specifically, it’s worth noting a couple of factors after 200km-plus drive. Impressively, the Leaf went close to its claimed range, despite a hefty chunk of freeway driving – not an electric vehicle’s best friend by any means. It’s also quiet and refined to drive – as we’ve found before – but the knowledge that you have access to plenty of easy-to-find charge points, should you need them, makes electric vehicle ownership a lot less stressful than it might otherwise be. 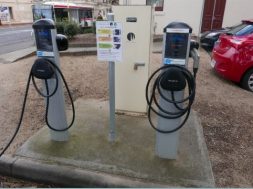 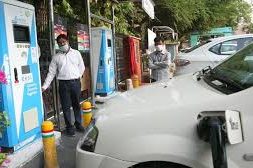 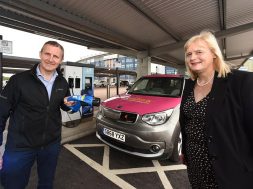